A University of Kansas football player allegedly threatened to shoot his girlfriend while holding a loaded handgun, according to a newly released court document, leading to his arrest and dismissal from the team.

Maciah A. Long, 19, was arrested Aug. 20 at his off-campus apartment following an argument with his girlfriend, according to an affidavit prepared by police to show probable cause for Long’s arrest, which Douglas County District Court made public this week. 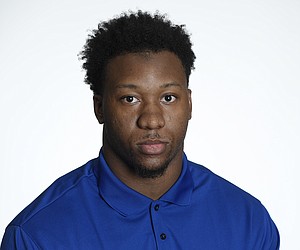 According to the affidavit:

The girlfriend told a police officer that during the argument Long was holding a gun, slid a bullet into the chamber and told her, “I’ll shoot your kneecaps out.”

Officers observed a television with a broken screen, consistent with being punched or having something thrown at it, and other items in disarray in the apartment.

Long posted bond and has been released from jail. His next court hearing is scheduled for Sept. 26.

He did not immediately return a phone call from the Journal-World on Thursday, and did not have an attorney listed with his case in court records.

Long is no longer listed as a KU student, according to the university directory.

KU football head coach David Beaty announced the day after the arrest that Long, a sophomore defensive end, had been dismissed from the program for a violation of team rules.

Long, a native of Houston, Texas, played both linebacker and tight end for the Jayhawks in 2016, according to a KU Athletics’ news release. According to KU Athletics, Long did not record any defensive statistics and was credited with one yard on two carries on the offensive side of the ball.

so if he is not a student....why is headline saying he is?
not finding him on 2017 roster! is it too hard to just report a story and not politicize it? apparently !

Probably because he was at the time he was arrested.

I don't see how it's politicized, it seems like it's just being reported.

In any event, it's sad for everyone involved.

Politicized? I'm not seeing it either.

I agree with Len. Sad.

The title of the article would have been better served to mention he was removed from the team or former player instead of trying to sensationalize the title making readers look to see what current player was involved. Once again, I do not have any issue with the article just the title.