Kansas quarterback Carter Stanley (9) escapes on a run during the second quarter on Saturday, Oct. 28, 2017 at Memorial Stadium.

The Kansas football staff proved a week ago it doesn’t mind switching things up at quarterback in search of a spark, but that doesn’t mean the coaches will have new starting QB Carter Stanley on a short leash versus Baylor.

“We’ve got to swing our sword and see what happens,” KU offensive coordinator Doug Meacham said of sticking with Stanley against the Bears. “There’s not a whole lot for us to be guarding against.”

Former starter Peyton Bender’s recent struggles within Meacham’s Air Raid scheme, of course, led to the switch. And with Stanley piloting the offense a week ago against Kansas State, the Jayhawks found some normalcy, along with some reasonable yardage and actual points after back-to-back bleak shutouts.

“It’s almost like, you know, when you’re on that really rough flight and you finally touch down on the ground,” Meacham said of KU producing 482 yards in a 30-20 loss to the Wildcats, after totals of 106 at Iowa State and 21 at TCU.

No one moment or play served as a breaking point for Kansas (1-7 overall, 0-5 Big 12) moving on from Bender, Meacham said.

“I just think when you look at the total chemistry of what we have personnel-wise, nothing against Bender’s ability for what he does, but what he does, his dominant trait doesn’t really fit or suit what we are in other areas,” Meacham explained. “So I think the other kid just kind of fits with what we have at the other positions — not to single out any positions. I’m sure you can figure out what I’m talking about.”

The Jayhawks’ offensive line, then playing without starting center Mesa Ribordy, had trouble giving Bender, a pocket passer, time to survey and throw in blowout defeats to ISU and TCU. With Ribordy back healthy this past week and Stanley active as a rusher and able to extend plays with his mobility, the redshirt sophomore QB passed for 418 yards, with a touchdown and an interception.

“He’d been sitting the bench for three months and he threw for 4-whatever. That was a pretty good performance by him,” Meacham said. “We had some drops that were kind of critical. I think that screen play (junior receiver Steven) Sims dropped was going to go to the house and then the next one he dropped.” 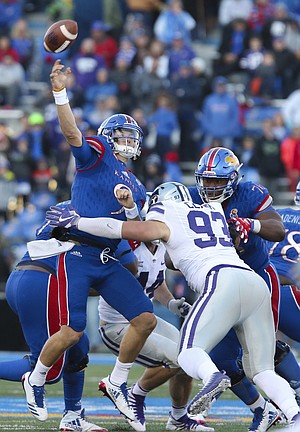 Kansas quarterback Carter Stanley (9) leaps as he is hit on a throw by Kansas State defensive end Davis Clark (93) during the fourth quarter on Saturday, Oct. 28, 2017 at Memorial Stadium. At right is Kansas offensive lineman Chris Hughes (76).

As a rusher, Stanley gained 55 yards vs. K-State, but also lost 32 (with minus 27 coming on four sacks). Meacham said the sacks were more a result of the Wildcats’ scheme than O-linemen “getting whipped” one-on-one, but he was surprised his new starting QB didn’t execute zone-read runs as well as anticipated.

“So we really, really worked hard on that part of it this week, getting that cleaned up,” Meacham said, “because that’s what he gives you is that extra element, that whole other level of something you have to defend.”

Considering Stanley only threw 23 completions on 48 attempts (47.9 percent), there were aspects of the passing game to address, as well, before Kansas tries to end its seven-game losing streak against winless Baylor (0-8, 0-5) at Memorial Stadium (11 a.m. kickoff, FOX Sports Net). Still, Meacham didn’t have many complaints and estimated KU receivers dropped at least four would-be connections.

“He’s not a pure, natural thrower. So for him to make some of the throws he made … He really throws that deep out to the field really well, which is really just odd,” the coach said of a QB not known for throwing long. “He’s very accurate with that. He hit Steven (nine receptions, 233 yards, TD vs. K-State) a couple of times on third-and-long there in a coverage that allows for it. He’s really accurate with those long field throws, which is kind of weird, because it’s usually not the case. He’s got a pretty strong arm. He gets it out pretty quick. For him he just has to continue to work on being on the right guy sometimes.”

Although far from perfect, many of Stanley’s teammates credited his style and effectiveness with firing up the entire team.

“It was awesome. It got us all hyped up,” sophomore left tackle Hakeem Adeniji said of Stanley’s big plays through the air and on the ground. “When you play with that energy and that intensity level it just makes you better and everybody feeds off it.”

“With Carter you can expect that,” Armstrong said. “He’s been doing that since he got here. He didn’t change much.”

With his offense seemingly headed in the right direction again, Meacham is drinking from a half-full glass.

“Other than those two games (at ISU and TCU) you look at us, we function OK. If you omit those two games that were just terrible we’re right under 500 a game in the other six games (462 yards on average),” Meacham said. “The common denominator was our center was out. And we may have found a little something with Carter. Because Carter has kind of that moxie, fiery thing. That kind of resonates among everyone else. That gets you excited and he’s kind of a tough guy, kind of a warrior-type guy.”

“So I think the other kid just kind of fits with what we have at the other positions — not to single out any positions." I don't understand why it took this long to figure out? Pretty sure the fans saw it every game. There's just not enough time back there for a pocket passer. Also, Stanley plays more like Kenny Stills and Trevone Boykin, so you would imagine he's a more natural fit for Meacham's offense. Great long overdue article. The team looks looks completely different with Stanley, in a good way. Let's #StickWithStanley and not bring in Vic next year.

Carter should have been starting 3 games ago. Our coaches just seem to lack finding the right guy.

So I am starting to wonder if Meacham finally won the argument with putting Stanley in. Seems like Beaty wanted Bender to work from day one and since Beaty had a hard time surrendering play calling at first among other QB assignments, he might have still been trying to control who was playing at QB. Maybe I am reading between the lines on this too much but the performance last week might have gotten Meacham what he wanted the whole time in Stanley. I find it hard to place too much blame on Beaty though cause when you are in the environment of NCAA football where winning quick is everything and it is hard to relinquish the control.

Oh no I give him credit. Just pointing out that it can be tough surrendering control in a situation like Div I or professional sports.

Bender was throwing for 400+ yes before we lost our center and went up against was are proving to be 2 of the better D's in the conference, so it's not like him starting was without merit.

It is also worth recognizing though not officially discussed that Carter was allegedly hurt at the end of training camp, so he wasn't available the first few weeks. Maybe he's just getting healthy again.

From what I saw in the TCU game, it wouldn't have made a difference who was back there.

Bingo! this in reply to the post of Craig above.

This just begs the question: "why on Earth has he not been playing?!" This whole SAME scenario played out last year. nice "talent development". How many 3-outs did we have with Bender this year that lasted UNDER two minutes? and, yet, we wait until game 8 to make the switch? I. just. don't. get. it. This is exactly the reason HCDB ought to be canned- it is just downright ridiculous and shows he has NO idea what he is doing.

Just to throw the discussion off-topic, and because I am a bit of a jerk, the above comment was not a correct example of "begging the question." Sorry, just one of my grammar pet peeves.

Gordon, Please carry on. Let us know just what does beg the question.

Or maybe it shows that you don't know who's injured/available.

The opening sentence "The Kansas football staff proved a week ago it doesn’t mind switching things up at quarterback in search of a spark" is completely at odds with the whole story about KU's quarterback selection this season. They resisted and resisted using anyone but Peyton Bender, to the detriment of this season's chances. Would Carter have been better early in the season (or playing the whole season - I understand his hand was hurt)? We'll never know. But reading that first sentence produced a guffaw from me.

Even if he was hurt for 4 weeks, why not start him after TCU game? Maybe they wanted Bender to take the hits and not Stanley, who maybe QB of the future?

It will be difficult to win many games when only completing 50% of the pass attempts. That's average for flipping coins, but actually below average for a QB.

Wow, hope KU doesn't need Bender again, given Meacham through him under the bus. Clearly not a players coach to dump on him publicly. “I just think when you look at the total chemistry of what we have personnel-wise, nothing against Bender’s ability for what he does, but what he does, his dominant trait doesn’t really fit or suit what we are in other areas,” Meacham explained. One can only speculate, but not sure Stanley or even the great and mobility challenged Tom Brady could have done much against TCU given the horrible O-line play.

carter stanley is the best thing this team’s got going for it. we still lose, dont cover & hcdb & “dr” Z are gone w/i a week. i love ku, but: #realist

also, can we please go the rest of the year w/o hearing the word “scheme”?! clearly we have none. it is an embarassment to pass it off on that as if That is the problem. just. play. ball. that is all.

The coaches seem pretty lost, so yes, there is no apparent scheme.

Y'all have never watched any of our games from above or again have you? Besides TCU & ISU game. Doug Meacham's schemes are more than successful.

Peyton's awful miscues on short passes, inconsistent blocking and drops are what kills the scheme. His plays work 90% of the time.

Don't even try to argue until you've watched a coaches cut

I am taking my KU flag and placing it in storage until B.B. season,!. Our AD did not hire coach, but someone whom he thought could recruit. We must have a head coach and OC and DC. After 3 years we have none of the above. The three head coaches forKU (HC OC DC) have a documented record of non-success. The grad assistants could do better. I want my KU flag to fly with honor. The present AD, Head football coach or DCor OC have not demonstrated competence.

Yes, I have a football shirt I bought in 2010 and have only worn it once. Too humiliating to be caught in public with it.

I saw nothing that worked today for us. I think Bryson will sing a different tune if he has the guts to keep posting his support of coaching staff