Kansas cornerback Hasan Defense (13) celebrates with his teammates after intercepting a West Virginia pass during the third quarter on Saturday, Sept. 23, 2017 at Memorial Stadium.

Week in and week out, the Jayhawks prepare for their Saturday matchups with a victory as the end goal. Yet in seven straight games they have failed to achieve a win.

KU hasn’t defeated an FBS or Big 12 team this season. The same can be said of Baylor, so that brings a different vibe to this game against the winless Bears — even if the Jayhawks are considered about a touchdown underdog on their home field by Las Vegas oddsmakers.

Although Kansas head coach David Beaty typically downplays the ramifications of a single game on the entire rebuilding process, the third-year head coach pivoted this week when asked whether the BU game carries with it added significance, because the winner moves out of last place in the league standings.

“Absolutely. This is a big game for both of us,” Beaty replied. “Somebody's going to come out of here with the first Big 12 win and kind of move yourself into position to be able to attack the rest of the season. It is a huge game for us. We are looking forward to the challenge, and it will be a great one, because they want their first one just like we do.”

Although KU enters a rare winnable weekend coming off a competitive showing in defeat against rival Kansas State, the Bears have been the more consistent team in Big 12 play, with an average outcome of roughly 43-24. KU, meanwhile, has been shut out twice, leading to an average league defeat of approximately 48-15.

The Jayhawks obviously need a win. They will have to follow Beaty’s sense of urgency in all they do to make it happen.

2. Defensively, be prepared for anything

The Bears’ offense typically puts up yardage and points, even though the way it goes about doing so rarely looks the same. At quarterback, BU uses both Charlie Brewer and Zach Smith, but the variances go deeper than that. KU defensive coordinator Clint Bowen said Bears co-offensive coordinators Jeff Nixon and Glenn Thomas have altered their play-calling schemes based on the opponent.

While there are some staples, such as taking shots deep for 6-foot-3 sophomore wideout Denzel Mims (38 receptions, 727 yards, seven touchdowns) it’s hard to predict what else Baylor might try.

At various times this season, KU’s defense has looked susceptible against both rushing and passing attacks. So linebacker Joe Dineen, safety Mike Lee, defensive linemen Daniel Wise and Dorance Armstrong Jr. and their teammates will have to show they’ve learned from past mistakes.

“Everyone in college has the same problem with inexperienced kids. A lot of times after you’ve shown them something a couple times, then they can do it,” Bowen said. “But the first time they see something it’s usually the learning experience, and that’s where Baylor hit a few on their tailback wheel routes and the type of things that they do that are a little bit out of the norm and surprise people and make some plays. That’s how they scored their one touchdown against Texas, was basically a trick wheel play (a 52-yard Brewer pass to Blake Lynch).”

As first-year head coach Matt Rhule and his staff try to overhaul a program still recovering from a sexual assault scandal under former Baylor coach Art Briles, the Bears are relying on numerous young players.

This past week against Texas, BU started 12 underclassmen (seven on offense, five on defense) and 17 true freshmen at least made it onto the field. On the season, 28 freshmen or sophomores have started at least one game. Underclassmen have accounted for 62.5 percent of Baylor’s tackles through eight games, and they made 62 percent of the defense’s tackles in a 38-7 home loss to Texas.

Kansas has an edge in the experience department for a change, so the Jayhawks need to take advantage of that on both sides of the ball. 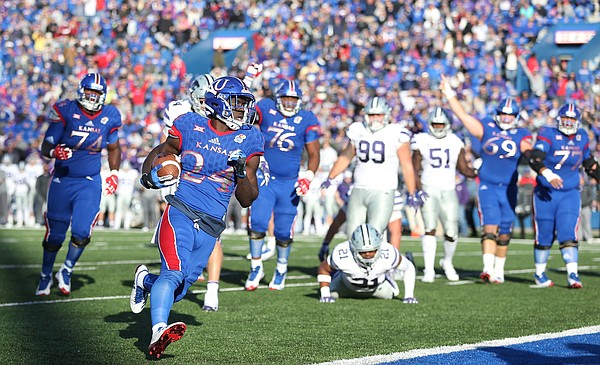 Kansas running back Taylor Martin (24) runs in a touchdown during the fourth quarter on Saturday, Oct. 28, 2017 at Memorial Stadium. by Nick Krug

The Kansas offense, suddenly revived with the return of center Mesa Ribordy and the insertion of quarterback Carter Stanley, has to find success early against the Bears.

“I think you’ve got to look at it like they’re probably a little fragile if things don’t go well,” KU offensive coordinator Doug Meacham said of BU’s defense, which is allowing a Big 12-worst 527.2 yards a game in league play. “So I think if we come out and play well early, I think it’ll be a good football game.”

There’s no better way for Kansas to set that stage than by winning the line of scrimmage on offense. Redshirt sophomore Ribordy is back, and his presence alone helps guards Andru Tovi and Chris Hughes and tackles Hakeem Adeniji and Clyde McCauley III play more effectively. The O-linemen need to give Stanley protection so he can keep making big passing plays with Steven Sims Jr. as he did a week ago and exploit a BU secondary that starts two underclassmen corners, freshman Harrison Hand and sophomore Grayland Arnold.

Baylor is more experienced up front, with junior defensive end Greg Roberts, senior pass-rusher Brian Nance, junior nose tackle Ira Lewis and sophomore D-tackle Tyrone Hunt. If KU can play sound in the trenches, that should set the offense up for another productive day.

“It’s just like I told them,” Meacham said of his message to KU’s offensive players. “The team that wants it the most will win this one. If you want it more than they do, we’ll win. Beyond scheme or anything. If we show up and we want to beat them, we’ll beat them. If we show up and we’re not all the way in it, we probably won’t beat them.”

A week ago against K-State, the Jayhawks played like they had a pulse (at least on offense and defense), which was a welcome change from previous weeks when they suffered three consecutive blowout losses.

Now KU has to harness its relative momentum for a game that long has looked like the most winnable Big 12 matchup on the schedule.

It seems Beaty knows how critical a victory here, against a winless, rebuilding Baylor program, would be for him in his own reclamation project.

Veterans such as Dineen, Sims, Armstrong and Wise have been itching for a victory too long, and with Stanley at quarterback the entire roster seems re-energized. If the Jayhawks truly are invested in Beaty and this rebuild, they have to strike now and give the KU coach just his second Big 12 win in 24 tries.

42-17 Baylor... And after the game Beaty gets a raise and Zenger gets promoted to Chancellor, by the current Chancellor.

Sometimes, comedy like this is what I need. Thank you John.

I'm just not sure what to make of coach's comments "They're a good football team"...

They lost to Liberty at home and they haven't won a single game. Are standards that low?

I’d prefer it if he was honest and said “man, these guys suck.” But then if we lose what’s that make us? Dog sh**. That’s what.

Realistically, looking at tomorrow's game. I'll use these check marks in counter to what Benton used.

I think there's a good chance we see the best football game since 2014 TCU v Kansas get played in Memorial Stadium tomorrow. Baylor is not a bad football team, they are a very young team, axed with a near Death Penalty in one of the most prolific offensive conferences. Making winning hard because you have to score quite a bit.

I've watched 4/5 Baylor games including their visit to Manhattan in person. Mimms is not a joke, the kid is going to TORCH our secondary on a play tomorrow and make everyone realize what a great WR looks like.

I think Baylor plays to their competition for the most part and will continue to do so in Memorial Stadium. It's going to come down to Carter Stanley having the ball in his hands in the 4th and I think we are going to see flashes of Todd Reesing.

I'm not sure how you give our offensive coaches a plus compared to Baylor...Baylor has scored 24 points/game we have scored 15 points/game. We have been shut out twice this year. And although the one game Stanley played in we scored 20 points, it is still below the Baylor average.

If Stanly is the quarterback,KU has a chance. If it is anyone else, not so much.

Benton's predictions have been pretty good this year, so I won't make fun of them anymore.

Such a hard game to predict. It's Dad's day, so there might be a decent crowd, but I don't think so, due to the 11am start. I asked a student today if he was going to the game and he asked: is there a game tomorrow?

Baylor plays so young, they might be getting worn out as the year progresses but, if they are going to rally for any game, it will be tomorrow.

I think I'll go with the guys who make money in setting lines. I think we cover but ultimately lose. Baylor 38-KU31.

It is sad that we are hoping for a win against a winless team to give some credence of hope to the football season.

Don't worry, just like every week, I turn on the TV and watch every moment of the game hoping for a change and seeing the TV analysts readily identify issues with our schemes and execution.

It all comes down to KU’s best player - Mesa Ribordy.

we start in a hole, come back, & dont cover. hcdb is toast.

In comparison to the other conference games, last week's respectable showing felt like a win. If we can put up 20 vs. K-State, we ought to be able to cross the 30 mark against Baylor. It would be cool to give the defense a 7-10 point lead to work with for a change, too. Fingers crossed.

I have absolutely no idea what will happen. It's a toss up for me.

This is one game where youth can’t be used against us. This Baylor team has 4 seniors on their depth chart. Double digit new starters. No excuses today.

And secondary 2 sophs, 1 fr, and a junior, Sims should crush it today

Bryce, if we lose, I would encourage you to give KU one last chance to do the right thing for the football program by making an announcement by Monday.

For me, if we lose, if there is not significant changes made by the end of the season, then I'm out. I've wasted too much time and energy caring about something that the Chancellor's haven't cared about at all. So why should I?

Maybe I'll start following Washburn or Northwest Missouri State for football. Or pick an Academy (my dad served in the Navy, so that might be an easy choice). At least these schools take football seriously.

Well, we played to a tie in the Toilet Bowl, so maybe this one will be better than that.

Today, #25 - Dom Williams will make it onto the field, and that will definitely help KU’s run game...

It is time. Fire OC and D c immediately. Coacb B has one game to document he is a head coach. Next he is removed. No more excuses or blaming players. It is time the three main coaches are removed due to inability to give the players the skills to win....against a team who has not won this season. The coaches must accept responsibility for their inability.

It's seriously time to just join the Big East to play basketball. Disbanding the football program is the only answer. Quit putting resources into a failed venture. Firing bad coaches just to hire more of them is a lost cause.