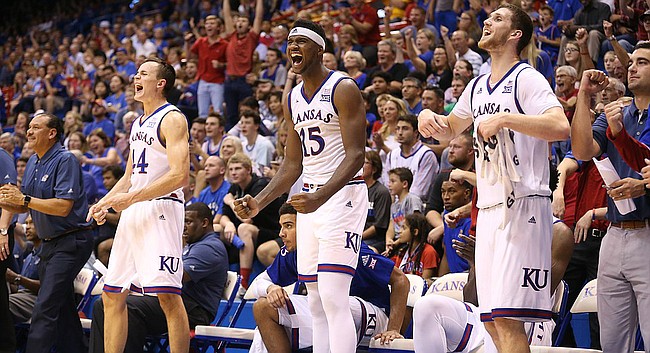 The Kansas bench celebrates a bucket by Tyler Self during the second half, Tuesday, Nov. 1, 2016 at Allen Fieldhouse.

Arrivederci, Lawrence. The Kansas Jayhawks are headed to Italy.

Long after the current Kansas men’s basketball team wraps up what has been an amazing 2016-17 season, the encore edition of the players who remain, along with any newcomers who join them, will make a trip across the Atlantic Ocean for four games in Italy this summer.

The trip, which is slated to include four exhibition games on Italian soil, will take place Aug. 2-3 in Rome and Aug. 5-6 in Milan, and will be similar to past foreign trips taken by Kansas, which also has traveled to Canada, Switzerland, France and South Korea in recent years.

KU’s Williams Education Fund has put together travel packages for active members interested in joining the Jayhawks overseas, and the packages include tickets to all four games, air and ground transportation, hotel accommodations, guided tours, a reception with the team and more.

With the Jayhawks certain to lose seniors Frank Mason III and Landen Lucas to graduation and likely to lose freshman Josh Jackson to the NBA, the week-long tour (July 31-Aug. 8) will offer KU’s new-look team, which will feature transfer Malik Newman and Sam Cunliffe, freshmen Marcus Garrett and Billy Preston and the return of big man Udoka Azubuike, an opportunity to develop some chemistry and get used to playing together a couple of months before the official kickoff of the 2017-18 season.

Frank Mason III on Tuesday was named the national player of the year by USA Today.

Jackson also on Tuesday was named a unanimous selection for The Sporting News’ freshman All-American team and joined Mason and Self in sweeping the Associated Press all-Big 12 honors of newcomer, player and coach of the year.

The Jayhawks ended the regular season with a tough win at Oklahoma State and will practice today at Sprint Center, in preparation for Thursday’s Big 12 tournament opener against the winner of tonight’s 8-9 game between TCU and Oklahoma.

After giving his team Sunday and Monday off, Self said he thought the Jayhawks were ready for postseason play both physically and mentally.

“From a confidence standpoint, I don't know that that one game did a lot,” Self said of last Saturday’s win over OSU. “But I think the culmination of games late in the season should have our guys going into the Big 12 tournament pretty confident.”

Newman, Cunliffe, Garrett, Preston and Azubuike would make a nice line-up even by themselves. It will be nice for them to get some minutes together. It should help a bunch that Newman and Cunliffe have been together for over a semester and learning from Coach and the current team.

HCBS can't presume at this time which current players will stay. Let's keep our fingers crossed.

Why couldn't hey have done this when I was stationed in Italy?

AP National Player of the Year for Frank Mason! No one deserves it more.