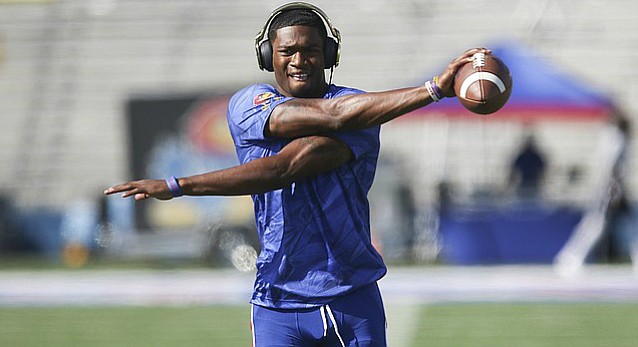 Kansas quarterback Montell Cozart (2) gets loose before throwing during warmups on Saturday, Sept. 3, 2016 at Memorial Stadium.

Investigations by their very definition are fluid, and when athletes are involved in them, the rosters on which they are listed potentially can change without notice.

For example, Kansas basketball coach Bill Self suspended Carlton Bragg indefinitely after he was charged with possession of drug paraphernalia. Bragg is on diversion and if any condition of that agreement is violated, a judge could revoke it and reinstate the charge.

The Jayhawks already lost a key player for the season when promising center Udoka Azubuike underwent wrist surgery. Somehow, without Azubuike and for the moment Bragg, Kansas has played well enough to project to a No. 2 national ranking when Monday's poll is released and is coming off of a pair of victories against top-five teams.

What if another suspension comes? What if another player suffers an injury? Fewer blowouts have resulted in fewer minutes for walk-ons. Even so, based on limited evidence, it doesn’t seem to be as talented a group as in many years.

It’s a little late in the season to hold emergency tryouts, but if it ever comes to that, going outside the athletic department isn’t a must.

Two members of the football team who have started games in the past but don’t project as 2018 starters are rusty on the basketball court, but have exceptional athletic ability and were accomplished high school players.

At least since JaCorey Shepherd moved onto the NFL, Montell Cozart generally is the first mentioned when I from time to time ask football players to name the best basketball player on the team. Cozart averaged 18 points and six rebounds as a senior at Bishop Miege.

Derrick Neal averaged 12.7 points and 4.7 assists for a Dallas Lincoln High team that made it to the Class 4A regional quarterfinals his junior season. Derrick’s twin brother, Erick, recorded the first triple-double (27 points, 10 rebounds and 12 assists) in UT-Arlington school history last season.

Don’t forget, KU defensive back Clint Normore joined the basketball team in December of 1987 and scored seven points in the 1988 national-title game.

There are basketball players sitting on the bench who already know 'the system' that would probably be preferred to someone coming in mid-season from other athletic departments.

Clint Normore did do a great job for KU. I remember seeing him play.

One could make the argument that Normore's 7 points, in a game KU won by 4, won the national title for Kansas in 1988.

Clint played a huge role in the NC game in particular.

Him going up to stuff Grant's attempted dunk like he was a WR on a crossing pattern is probably still my favorite play of all time. Love the underdog.

This article goes way beyond simple daydreaming...it's pure hallucination to think Cozart could step in and help the Jayhawks this late in the season.

Normore? He was not just a football player who decided to give football a try. He played roundball for Wichita State for 2 seasons before transferring to Kansas to play football...and he joined the team in mid-December, not in February. He was also recruited out of high school by Coach Brown to play basketball.

And here's a stroll down memory lane by Gary Bedore that chronicles the season and adversities faced by Danny and the Miracles on the way to the national championship...http://www2.ljworld.com/news/2008/feb...

We are already dead if it comes to signing football players this late in the season. I can see a vastly different team next year depending on the results in some of these investigations. I think Bragg has already played his last game at Kansas and Vick may be on the chopping block as well. That and with Mason, Josh, Lucas and Svi leaving, next year's team will have a very different look.