Most publications and websites limit their college football all-conference postseason honors to two teams — but not national analyst Phil Steele.

Johnson caught 30 passes for 363 yards, and also earned second-team honors from the Big 12 coaches and the Associated Press.

Wise made 16.0 tackles for loss and 7.0 sacks. The league’s coaches voted Wise to its first team, while the AP named him a second-teamer. 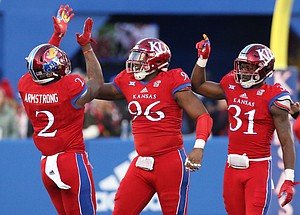 Dineen led the Big 12 in total tackles (137), tackles for loss (25.0) and solo tackles (93). Big 12 coaches and the AP also identified the linebacker from Lawrence as a second-team performer.

Armstrong made 63 total tackles, 9.0 tackles for loss and 1.5 sacks, and earned second-team status from the AP and Big 12 coaches.

Adeniji, an honorable mention selection by Big 12 coaches, started all 12 games as a tackle for KU in 2017.

Rui led the Big 12 in field goal kicking percentage at 85 percent — 17-of-20 — and connected on a career-long 50-yarder at Oklahoma State.

Torneden made 61 total tackles, 5.0 tackles for loss and 2.0 sacks, and was on the coaches’ honorable mention list. 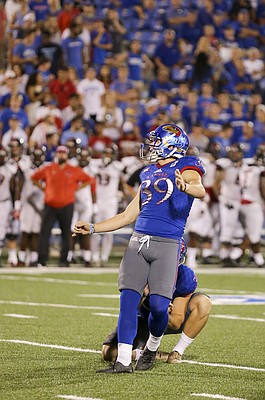 Kansas place kicker Gabriel Rui (39) watches his kick on a field goal attempt during the fourth quarter on Saturday, Sept. 2, 2017 at Memorial Stadium. by Nick Krug

Damn, Beaty is doing a fantastic job! Never had this many players make his list before! #DavidBeatyforPresident

yeah, how has all this all conference talent not turned into more than 3 wins?

It would seem that this points to Beaty's ability to recruit and develop players.

The lack of Ws would seem in part to reflect the crater called a roster that he inherited. We're still very much a young developing team which is obviously different (to anyone willing to think) than an top team with top talent that has imploded.

Remember not to long ago when we didn't have any players on any team?

Obviously it's not enough progress but only those committed to seeing failure can't see progress.

When beauty came on we had more than we have now. I have cited the link many times any you and others are posting incorrect information.

I understand some things but how does Dineen make 2nd team Big 12 but SI`s 2nd team ALL-AMERICAN??