The Jayhawks scramble to get the ball in as it is inbounded to Kansas guard Devonte' Graham (4) with 20 seconds remaining in regulation Friday, March 11, 2016 at Sprint Center in Kansas City, Mo.

Kansas City, Mo. — The Big 12 postseason championship will come down to the top two teams from the regular season. 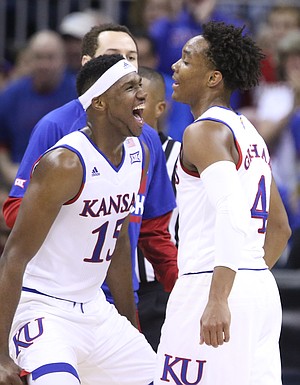 “You have to deal with the press and full-court man-to-man the whole 40 minutes," Graham said. "We’re excited about playing for a championship. That’s what it is, a championship game.”

Of possibly winning the tournament, Perry Ellis, who had 20 points vs. Baylor, said: “I think it is real important just from a team standpoint, getting a lot of momentum going forward. All our guys are trying to win this. We’re trying to get through it.”

Self said: “It (preparation) will be difficult, but everybody in the tournament knows the other team because we’ve all played each other twice. I don’t think it’s overload tonight or tomorrow to get them ready. You just go out and try to have fun and play and be aggressive and see what happens. It will be a fun game for us. That’s how I’m looking at it and what I’m going to tell my guys.” 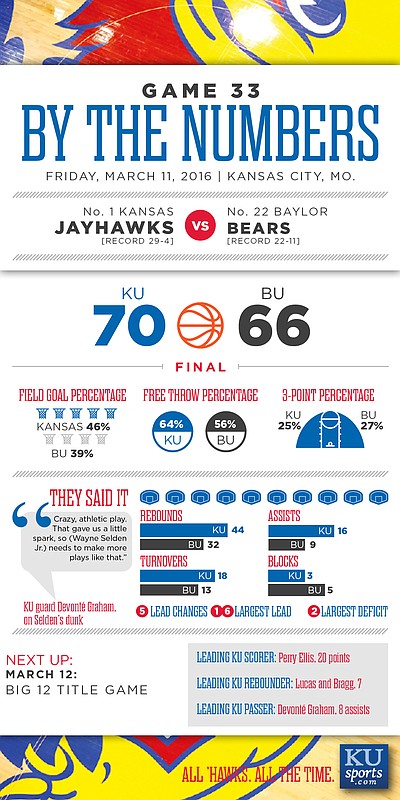 The title I was hoping for: KU MBB vows to beat the crap out of Higgin's WVU beasties. It's your time, now or never, seniors! I'd like to see us win by 20s. I'm tired of them harrassing us every time. Let's show Higgins who's the Boss in B12. Let's go, Jayhawks!

Not really the game I was looking forward to, I don't like the "mugging in the park" style of play that Huggens deploys. His players could be called for multiple fouls on every possession and they don't get called. I don't enjoy watching this type of game. I hope the Jayhawks break the press and hang a hundred on them. That would make the game better!

I agree Mike. I really dislike watching WVU style of play. And when fouls are called the fans blame he refs...haha. This will be a tough game, but I have a feeling the Jayhawks will be breaking down the press and will shoot them out of their zone. This KU team is special and I expect them to make it to the Final Four. Rock Chalk!!

As I said in another post elsewhere, Kansas is going to have to bring their A+ game tonight to beat West Virginia. An A game will not be good enough.

We have a couple advantages over WV - the Sprint Center will be decidedly on the side of the Jayhawks, and the Mountaineers are going to be a tired team after needing an official to wave off Buddy Hield's would-be game-winner to get past the Sooners.

KU turned the ball over 22 times in Morgantown and looked like roadkill. Win or lose, the Hawks are going to be a 1-seed; that said, I hope that Self uses the game to run a clinic - such as making the Mountaineers pay for pressing and trapping. Score against the press!

KU's defense limiting Carter and Paige's good looks for a shot will be crucial. KU is going to have to make free throws. Getting the ball down court quickly against the press should get KU some good looks at the basket. I want to see this KU team beat WVA so bad I can taste it. Huggins has always played a "thug" style of basketball going back to his time Cincinnati. I didn't like it then, and I don't like this brand of it any better.

KU's defensive rebounding will also be crucial, because C&P get much better looks on 2nd chance shots after the D becomes less organized. Hopefully, Carlton and the others can continue to prove Coach wrong and keep their guys off the O-glass.

Robert is exactly right. You have to make WVU pay some for their press. Simply getting it to the front court doesn't cut it. You have to attack. If they do and then play the kind of defense they have been playing lately, KU should win. Being competitive on the boards will also be huge. This is one of WVU's biggest strengths.