KU, adidas unveil ‘Made in March’ uniforms for 2016 postseason

Kansas University's new white "Made in March" uniform, by adidas.

It’s March, and in the world of college basketball that mean’s “madness” is just around the corner, with the postseason about to get started.

When Kansas University begins its 2016 trek through the Big 12 and NCAA tournaments, the Jayhawks will do so with some new uniforms, unveiled by adidas and KU on Tuesday.

The “Made in March” threads are said to incorporate a sound wave pattern along the waistband of the shorts to pay tribute to famously loud Allen Fieldhouse.

According to a press release from KU, the Jayhawks will also be outfitted in new adidas basketball footwear, including special editions of the Crazylight Boost 2.5 Low and D Lillard 2 in team colors — crimson, blue and white.

If KU gets a No. 1 seed in the NCAA Tournament, as expected, the Jayhawks figure to wear the home white versions of the uniforms almost exclusively. Kansas, of course, already has wrapped up the top seed for the Big 12 Tournament.

Kansas University's new blue "Made in March" uniform, by adidas. by Photo courtesy of adidas

The blue ones may not be necessary if we take care of business... ;-)

Does anyone know where to get those shoes? My 8 year old wanted a pair "like the Jayhawks wear". Couldn't find them anywhere.
Correct me if I'm wrong but isn't the #1 point of a shoe deal to sell shoes?!?!

Addidas does sell KU shoes but probably not in kids sizes. You are right though, it's a missed opportunity. They should sell college logo shoes. He is the link to the adultsL http://www.adidas.com/us/kansas_jayhawks-shoes

It's always a beautiful thing when the Bird fans get all excited about winning the National Championship ... and then fail in the first weekend. Special uniforms? Wow, that doesn't seem entitled at all. The bigger they are, the harder they fall.

Tim, let me be the first to welcome you to the KUSports.com message boards! I see you created a profile today so clearly you just couldn't help yourself to leave the protection of your team's boards and felt compelled to come troll KU fans.

The uniforms you are making fun of are part of the Made in March line that all adidas schools receive come this time of year as they get ready for tourney play so KU isn't unique in this treatment. Though I will say earlier this season they had an iced out jersey for the Maui Invitational, and the last two games they've worn special 50's throwback jerseys for Black History Month, oh and they also have two other throwback jerseys (the chalk and phog) that they've worn on different occasions over the last 3 seasons. Guess it's good to be a tradition rich program where the inventor of the game was your first coach, you have the second most all time wins, 12 consecutive Big 12 titles, most conference titles all-time, most consecutive NCAA tournament appearances, most consecutive 25 win seasons, a home court record of 205-9 over the last 13 years, etc... (you get the idea). I'm sure whatever school/team you call your own must be really amazing to compete with that kind of tradition and achievements... Maybe if we try real hard KU will be able to match them one day.

You said it, Benny, and let's not forget the 14 Final Fours. Apparently Final Four isn't good enough for Timmy.

But then if, as I suspect, Timmy is a KSUck fan, he wouldn't know much about Final Fours and wouldn't be able to comprehend the possibility of winning a national championship, since the tamekittens have never won anything. 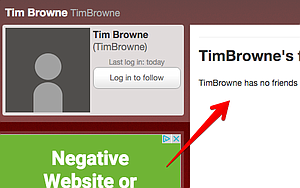 Well, since Tim Browne has no friends, he must be a troll from Mizzery...

Sort of makes you feel sad for Timmie. He just needs a friend.

I'm sure it's naiveté on my part, but I've never really understood the purpose of getting on a web site for the specific purpose of insulting someone or their sports team. It doesn't even reach the level of sophomoric, you're immediately outed as a moron and a looser, and for what? You spout pure rubbish, without any substantiating data to back it up and you think you're going to hurt someone's feelings, really? Wouldn't it be far better to have an intelligent discussion about the finer points of the game and how well YOUR team's doing than trying to be the wet blanket on another team's board? To each his own I guess, but it seems to me your time would be better spent elsewhere.

KU won't be stopped this time.

Bring back the 1960's short shorts with those knee high socks. We'd go undefeated. All of our opponents would be laughing so hard, they couldn't keep up with us!!

I am thinking this year will be different....we have all of our players healthy ['14's downfall] and all our players eligible ['15's fail].

What I am bummed about as is most of my fellow Jayhawk St.Louis Alum is that even though we are a site again, it looks like the Hawks are headed to Des Moines. Dammit!!!

Oh, and another problem I have with these jerseys - no crimson variant. 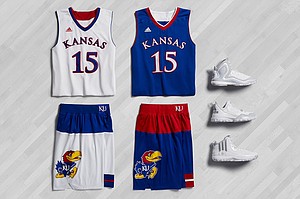 Like the Made in March unis .... Unrelated , I just read Terrance Ferguson backed off his commit to Alabama and reopened his recruiting .

I think these uniforms are decent. I don't know why they've received so much flak on social media, but to each his own, I guess. The shoes are awesome, in my opinion.