Kansas forward Hunter Mickelson (42) wrestles away a ball from Baylor guard Ishmail Wainright during the second half, Saturday, Jan. 2, 2016 at Allen Fieldhouse.

Waco, Texas — Baylor junior guard Ishmail Wainright, who is 0-6 against Kansas University in his college basketball career heading into today’s 7 p.m. battle in Ferrell Center, knows all about the winning tradition of KU hoops.

The 6-foot-5 Kansas City, Mo., native is related to one of the most notable players in Jayhawk history.

“My grandfather went to KU. He played on the same team as Wilt Chamberlain — Maurice King,” Wainright revealed to the Journal-World at Big 12 Media Day.

“They got second. He was on that team,” Wainright added of the 1956-57 Jayhawks, who lost to North Carolina, 54-53, in three overtimes in the ’57 NCAA title game in Municipal Auditorium in KC. “I’ve been trying to get some stuff from my father about him.”

King returned to KC after his playing career ended, working for Hallmark until 1991. After that, he mentored children at the Spofford Home and Fortress of Hope Church and always was willing to share his story in an attempt to inspire.

“I went to KU games, MU games, and because it was the home school, UMKC games (as a youngster). Playing against KU always is amazing. It’s just amazing,” said Wainright, who had seven points and seven boards in KU’s 102-74 rout of the Bears on Jan. 2 in Allen Fieldhouse.

“I want to be a coach. I want to be a mentor. I want to give back to my community in Kansas City, open up gyms all around the city,” Wainright said of his future goals being as ambitious as his grandfather’s. “I’m not the type of guy to say I want this, that, whatever comes my way, whatever I get,” he added.

Wainright — he has hit eight of his last 12 threes the last five games — is known as one of the most unselfish players in the Big 12, a good teammate above all else.

“My goal personally is get my guys, Rico Gathers, Taurean Prince and Lester Medford (seniors) onto the next level and finish their year out with a big bang, that’s my personal goal,” said Wainright, who has 152 points this season after scoring 103 total his first two seasons combined.

“That’s who I battle with every day to get off the boards,” Wainright said, referring to the bruising Gathers. “I learn stuff from him every day, different tricks, different ways to get better position when it comes to that. It’s no secret he’s just a monster on the boards. If he wants the ball, he’s going to get it. He’s going to rip it out of your hands.”

“Rico ... he’s an athlete,” KU coach Bill Self said. “He’s a guy you think that would be an NFL tight end. Great hands and is active and can move around and can run. I mean, he’s a real athlete. There's few guys in college basketball if any that rebound like Rico.

“I don’t think they’ve had bad losses. Our league is so tough,” Self said with a shrug. “Nobody has been very consistent. A lot of teams are up and down in our league. It’s just a great league.”

Game time set: Game time for the KU-Iowa State game has been set for 3 p.m., March 5. That will double as Senior Day for Perry Ellis, Jamari Traylor, Hunter Mickelson and Evan Manning.

Pesky zone: One challenge in playing Baylor is attacking the Bears’ zone defense.

“Baylor’s zone has length in it. It’s hard to attack it,” sophomore Devonté Graham said.

“Their zone ... with their size, strength down low. That zone can take different forms at times. It’s difficult to get in there,” junior Wayne Selden Jr. said.

Closer game: Self isn’t expecting a lopsided score as in the first meeting.

“We played great the first time. We got off to a 24-4 run,” Self said. “They didn’t play much zone. We made shots early and kind of got them out of it. Our guys know they are playing at a really high level now. They’ve got a little bit different looking team because Motley has become such an offensive force.”

BU coach Scott Drew on KU: “If you look at their (seven game) win streak, it’s typical of coach Self’s teams. They are playing great defense, taking care of the ball and very efficient on the offensive end. You know they are going to play well. You have to play very well to give yourself a chance to be successful.”

This, that: KU players today will wear uniforms to honor Black History Month. It’s a uniform inspired by Jayhawk uniforms of the 1950s. ... Baylor is 0-15 all-time against teams ranked No. 1 or 2 in the AP Top 25. KU is No. 2. ... A win today would give BU three straight wins against ranked teams for the first time. ... BU’s 9-5 record ties its best-ever mark through 14 Big 12 contests.

Cool story about his grandfather. About the game, KU is better, but sometimes it is when you play them. KU has played some emotional games, to continually be up for games at this age is tough. Baylor needs this one, RCJH this one is going to be tough, if the 3's fall to force Baylor's defense to change it will be ok.

Agreed. These kids are human. It's tough to stay at that optimal level of performance when you know deep down that you can afford to drop a game or two now.

This one's gonna be tough, indeed. However, a win tonight and the Big XII is all but clinched outright.

I knew Maurice King when my time at Hallmark overlapped his shortly. I didn't know him well, but the Maurice King I remember was a really nice guy!

Maurice was a stand up guy and a very good player. While he was the first African American to start and letter at KU, Lavannes Squires in 51 or 52 was our first African American on the basketball team. While he was not an exceptional player, he went on to become a very successful and prominent banker in Kansas City. Maurice unfortunately had to contend with racism in Lawrence and on the road in the Big 7. Wilt's arrival certainly paved the way for major strides to be made in civil rights which directly benefitted Maurice as did the efforts of Franklin Murphy in abolishing the "dual standards" that existed to an extent in Larry.

I remember Squires when he was part of the group that founded the Swope Parkway National Bank. I never cared much for Murphy, who I thought was a pompous sanctimonious @#!%^.

If true regarding Murphy, I think his relative or protégé posts on this board a lot...

Any time a chancellor takes an active part in community as well as university, they will be denigrated by some who believe only themselves should be able to pass judgement on worthiness of accomplishments by the leader of our university.

It's great to hear your takes on these stories. I had always believed Kansas was far more progressive so when I first heard some of the things that Wilt went through it surprised me although maybe it shouldn't have as most trailblazers haven't found it easy.

Every place in the U.S. had (and has) needs on the growing-up side of human relations.

I sometimes wonder if the subject of the mural below the Rotunda in Topeka would feature Quantril as a hero if the War Between the States not ended as forced total capitulation by one side? Both Quantril and Mad John Brown were as inhumane as the other.

Thank you for sharing your experience, Andy. I clearly remember Maurice King, and as Mick says, he was a very good player and undoubtedly an inspiration to others.

It is indeed tragic that he and so many other great athletes and non-athletes couldn't be judged on factors other than skin color. Every trailblazer has a special place in heaven, and this is a good week to remember that.

Since you post frequently, Suzi, and I know that you are a golf enthusiast, names like Charlie Sifford, Lee Elder, and Calvin Peete come to mind in that sport. To his credit, Tiger Woods has mentioned them continuously as some of his heroes, and everyone should regard them as such.

I would ask others to use this article to post the names or memories of other people that have contributed so much to making this Black History Month.

Thank you. As long time Jayhawks, it appears that we share a common bond. Of course, nobody can probably match your memories given your unique vantage point. Rock Chalk!

He was a great guy from all I know of my time with him. It was short and I was pretty young so my memory doesn't serve me too well. I am Maurice King IV. Greatful to see him recognized! Thanks for the article about my cousin and him! 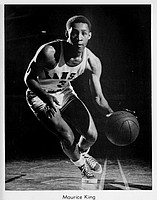