The Brooklyn Cyclones of the fabled, short-season, Class A NY-Penn League, had no shortage of talent in 2010.

Matt Harvey, the seventh pick of the first round of the June 2010 draft, a right-hander out of the University of North Carolina, headed the marquee. Juan Lagares ran down flyballs for Harvey, Wilmer Flores groundballs, then and now.

The Cyclones also had J.B. Brown, a .308-hitting second baseman drafted in the 14th round that year.

Harvey started Game 1 of the World Series for the New York Mets and had Flores backing him at shortstop, Lagares in center field.

Brown? He works under special-teams coach Gary Hyman for the Kansas University football program as a graduate assistant.

Sitting in a classroom at the KU football complex recently, Brown looked back on the play that proved the beginning of the end of his two-year professional baseball career.

“It was a rainy day. I hit a groundball and was running it out to first, slipped on the bag wrong and tore my hamstring. Got called back up to (Port) St. Lucie (Florida). We played a doubleheader that day. I got off the plane, went for a ball up the middle and did the exact same thing.”

In other words, he rushed back before his body had healed fully. 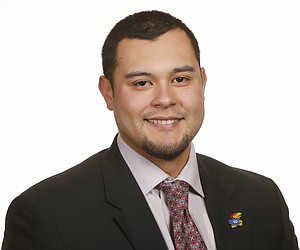 “I came back a little too early, but, shoot, like every other player, you’d rather be on the field than on the bench,” Brown said. “No regrets on that. I had a great time. I loved it. We had a lot of fun. We played a lot of ball. It was a grind, definitely. We were so tired a lot of the time we didn’t even go out, and we’d just play video games.”

Brown smiled when he thought about a younger Lagares.

“He would always try to wear my sunglasses out,” Brown said. “He loved my sunglasses. I had these gold Oakleys that he’d always take pictures with. It was a good time. We had a lot of fun.”

Brown said he had wanted to play college football, but that his father, a Texas high school football coach, convinced him he was better suited for baseball. After playing baseball at University of the Pacific in California and then professionally, Brown returned to his true love of football, helping his father, James Brown, at Mansfield Timberview High in the Dallas Metroplex.

J.B. Brown met many college head coaches and assistants in his father’s office. First-year Kansas head coach David Beaty made a lasting impression on him, when Beaty worked for Texas A&M.

“I found out he got the KU job, so I called him and annoyed him enough, and he gave me the job,” Brown said. “From then on, it’s been awesome. I love working for him. He’s great man. There are not enough good things I can say about him.”

Brown said he thinks that enough high school coaches in Texas feel the same way about Beaty and added that the KU coach and his assistants are so good at building relationships that he is convinced Texas talent will play a huge part in restoring the KU program to respectability.

“If we continue building relationships the right way, and I that know we will, we’ll continue to get the recruits that we want in here,” Brown said.

That read on Beaty played a big part in the former Texas A&M recruiting coordinator/wide-receivers coach shaping up as a head-coaching prospect KU athletic director Sheahon Zenger found appealing. Brown knows as well as anyone, some prospects make it all the way to their goals. Some don’t. Watching prospects develop is part of what makes sports so fascinating.

KU Sports Extra: It's Gonna Be Scary Out There by KUsports.com

Can anybody make sense of the first 4 paragraphs??