Stillwater, Okla — He's no Don Larsen and Saturday's 58-10 victory by Oklahoma State over visiting Kansas University at Boone Pickens Stadium was not the World Series, but Oklahoma State quarterback J.W. Walsh was just about perfect.

Walsh, who typically takes over for OSU starting quarterback Rudolph Mason when the Cowboys enter the red zone, finished Saturday's rout with 24 yards and three rushing touchdowns on six carries and added 68 yards and two more TDs on 5-of-5 passing.

"We have a lot of good packages for me, and the guys around me executed perfectly,” Walsh said. “Today, it wasn't so much what I did, it was what everyone else did and the coaches making great play calls because, when you watch them, they were just great play calls where everyone did their jobs. That's just what happens when you're clicking on offense.”

For fitting into his new role and not whining about a lack of opportunities, Walsh, a fifth-year senior and former OSU starter from Denton, Texas, has earned the respect of his teammates and OSU coach Mike Gundy. 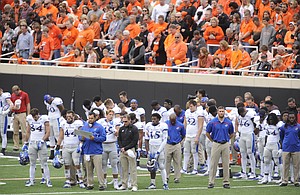 “He continues to make plays for us,” Gundy said. “I mentioned to you guys in the preseason, during the season and almost every week that we need to continue to involve him in our offense. He's a good football player.”

Kansas coach David Beaty whole-heartedly agreed with that assessment and said Walsh gave the Jayhawks' run defense fits all afternoon. The OSU senior scored on runs of 1, 3 and 4 yards and put the 14th-ranked Cowboys (7-0 overall, 4-0 Big 12) up 14-0 early in the game with a pair of walk-in touchdowns.

“He's a good player,” Beaty said of Walsh. “He can run. He did that all through his high school career. I watched him run right past me several times (while recruiting him). He's a talented guy.”

While Walsh was whipping the Jayhawks with his legs, OSU starter Mason Rudolph, a sophomore, was torching Kansas with his arm. Rudolph finished 20-of-26 passing for 305 yards and one touchdown.