Kansas freshman quarterback Ryan Willis pulls the ball down to run after being flushed out of the pocket by the Kansas State defense during the Sunflower Showdown game Saturday at Memorial Stadium.

With the conclusion of the Kansas football season — a 45-14 home loss to rival Kansas State — Chapter 1 of the Ryan Willis era is now complete, and the true freshman quarterback who played in 10 games and started the final eight finished his first season with the Jayhawks as the program's all-time leading freshman passer. 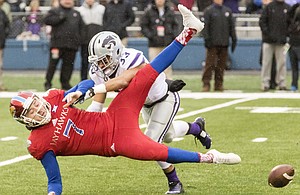 Willis entered the game already in possession of the top freshman passing season in school history.

Willis added nine touchdowns and 10 interceptions and finished with career-highs of 330 yards on 35 of 50 passing, all in a 30-20 loss against Texas Tech.

Willis' final act of 2015 featured a 53-yard completion to fellow-freshman Steven Sims Jr., the longest play from scrimmage for the Jayhawks this season.

I think I recall hearing that we had something like the top 5 most freshmen (1st year?) starters in the nation. It will be nice to have that experience backed up by the depth of a full roster (so we can RS some freshmen) which should lead to some W's in a couple years.

Stan Weber often preaches about the significance of having a returning QB, and has pointed out the effectiveness of Snyder when he has a returning starter at the position. Having Willis back could be huge for the program.

He CRUSHED the all time record.

I like Willis but he is only a backup. As was discussed in recruiting needs rbs are needed because Willis not a runner. I believe to be competitive must have dual threat qb so while happy for Willis success he is not the answer.