Baylor hangs on against Kansas baseball

A seventh-inning home run from Kansas University freshman Owen Taylor gave the Jayhawks just a momentary boost Saturday afternoon at Hoglund Ballpark, where KU’s bullpen faltered in the final two frames of a 6-3 loss to Baylor.

Kansas trimmed the Bears’ lead to 2-1 when Taylor smashed a Nick Lewis pitch out to right-center field. BU (18-28) snuffed out the home team’s momentum, though, once starter Drew Morovick ran out of gas. 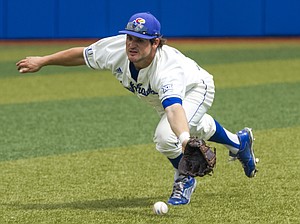 “Our pitching came out today and Drew gave us a good seven innings. We competed offensively all day. We hit the ball hard,” Taylor said.

Morovick (4-4) left in the top of the eighth with a runner on, and the Bears eventually turned that into a pair of insurance runs with three singles off Kansas relievers Blake Weiman and Sam Gilbert.

“We weren’t gonna use (Stephen) Villines on back-to-back nights,” KU coach Ritch Price said of turning to the Jayhawks’ sophomore closer in the situation. “Unfortunately, we couldn’t stop the bleeding.”

BU starter Lewis didn’t dominate (no strikeouts, four hits in 6 2/3 innings) but he kept Kansas hitters off balance, Price said issues in the batter’s box have troubled KU (20-27) of late.

“If you’re gonna be a good offensive club, you’ve gotta be good one through nine,” the coach said. “If you’ve got four guys struggling at the plate, obviously you’re reducing the number of quality at bats and opportunities for scoring. You’re seeing the ramifications of that. We had opportunities, and we couldn’t get a clutch hit.”

Shortstop Matt McLaughlin went 0-for-4 and finds himself in a freshman funk.

Once Baylor added two more runs in the ninth, an RBI-double from Connor McKay in the final inning meant little for Kansas.

The late-inning letdown left the series tied at 1 headed into today’s 1 p.m. game.