Kansas guard Kelly Oubre, Jr. (12) is defended by Wichita State forward Zach Brown (1) as he takes a shot in the Jayhawks' loss to Wichita State Sunday, March 22, 2015 at the CenturyLink Center, in Omaha, Neb.

Omaha — There were a dozen big shots, all kinds of clutch moments and even a few runs that decided Sunday's 78-65 victory by seventh-seeded Wichita State over No. 2 seed Kansas at CenturyLink Center.

But no play better illustrated the difference between the two teams or defined the reason for the final score like the hustle play and ensuing slam dunk made by Wichita State freshman Zach Brown with 9:33 to play in the game.

With just under 10 minutes remaining and the Jayhawks (27-9) trailing by nine points but closing in on some momentum, KU point guard Frank Mason III drove to the rim looking to make a play. As Mason floated under the basket, he attempted to fire a pass toward Kelly Oubre Jr. on the perimeter.

Self, Ellis and Graham explain what went wrong in season-ending loss to WSU

Minutes after Kansas University's basketball season ended Sunday in Omaha, Jayhawks coach Bill Self, as well as players Perry Ellis and Devonté Graham, answer questions from the media about how Wichita State knocked them out of the NCAA Tournament.

Brown, who said his job on the play was to deny any pass toward his man, got his finger tips on Mason's bullet pass and sent the ball tracking toward mid-court. Oubre appeared to have a step or two lead on Brown in the race to chase it down, but just before the KU freshman could clamp down on the bouncing ball, Brown darted in front of him, poked it away and raced in for an uncontested dunk that put the Shockers up 56-45.

“That summarized the game right there,” said WSU point guard Fred VanVleet, who finished Sunday with 17 points, six rebounds and six assists. “That guy's supposed to be a lottery draft pick and we've got Zach Brown just outworking him and getting the ball. That was big for us. That sums up us. That sums up the game.”

Brown, a 6-foot-6, 213-pound forward from Houston who finished with seven points and three fouls in 13 minutes, downplayed his contribution in the joyous WSU locker room following the game.

“Everybody made a play out there,” he said. “I won't say that play was the difference, but it was a turning point in the game.”

As the freshman who averaged just 10.4 minutes per game this season continued to deflect credit for Sunday's victory onto others, Brown's teammate, red-shirt sophomore Zach Bush, a walk-on from Wichita, had no problem speaking for him.

In a less convicted way, Brown himself confirmed as much moments later.

“I have no idea how it happened,” he said. “I just really wanted the ball. He had the ball in his hands but I managed to tip it out.”

From there, the only decision left was whether to get the sure two or try to rattle the rim. Brown elected for the latter and cocked the ball behind his head for a monster, two-handed slam.

“Dunk, layup, it's all two points,” Brown said. “I knew the dunk would give us a little more momentum and get everybody more hyped.”

It worked, and the Shockers (30-4) rolled into the Sweet 16 from there, with their lead never again dipping below eight points.

“To me, this is probably one of the biggest wins I've been involved with (as) a Shocker,” said WSU guard and native Kansan Ron Baker, who scored a dozen, eight coming in the first half. “Just because we don't get the opportunity to play KU and we're going to the Sweet 16, both tremendous achievements.”

More news and notes from Kansas vs. Wichita State in the NCAA Tournament 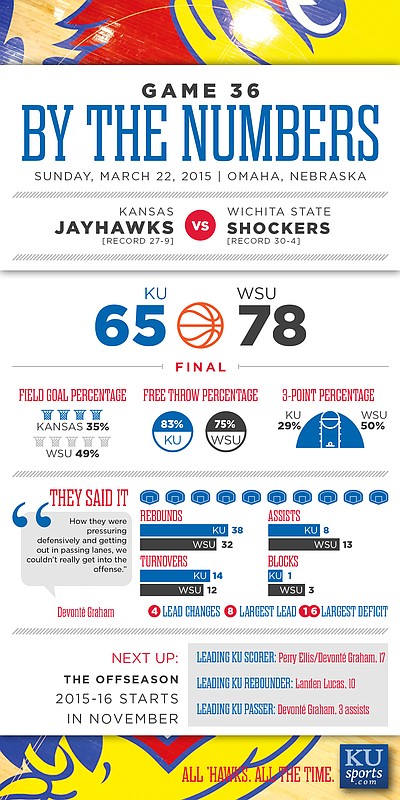 By the Numbers: Wichita State knocks out Kansas

The Referees Screwed KU....Why in the World did they let Missouri Valley Conference Referee's officiate that game.

I think you're bailing KU out by blaming the refs on this one bud. I saw so many instances where WSU just simply outhustled KU. And Van Fleet was absolutely correct. Oubre the top 10 HS player in the USA a projected lottery pick got outhustled by another freshman who just simply wanted it more. Kevin Durant said something when he first got drafted that's always stuck with me to this day: Hard work beats talent, when talent doesn't work hard. And was evident in today's game. Other than experience, KU had WSU beat on size, athleticism, etc. But WSU just played so much harder that it was honestly astonishing. The announcers were talking about how WSU had the experience factor over KU but I thought about Kentucky, and how last year they were the youngest team in the nation, yet made it to the national championship game. Beating experienced teams like WSU, Lville, Wisconsin on the way. So that could never be an excuse to me. Sometimes I just really wonder what Self tells his players.

I second that. WSU played hard and deserved the win. There were Big XII refs working that game as well. Maybe they were the ones who "screwed" us by making Selden and Greene score 0 points (both the #13 and #28 recruits last year, mind you) and convincing our bigs to score less than 20 points in the paint with an obvious size advantage. The refs really jobbed us when they also coerced us into not playing a lick of perimeter defense. Damn MVC refs!

Well said Dave. Never blame a loss on the refs. It was so evident that WSU just wanted it more. I'll take a walk on who wants to win over a one and done anyday. I hope Oubre is gone.

This one could have been officiated by Max Falkenstein and not had a different outcome.

I think these refs were very sure not to give KU any breaks, but that wasn't the problem for the guys in white, trimmed with crimson and blue. Count up the minutes by seniors on each team if you want a good hint at what was the problem.

That's pretty pathetic, Jason. KU got CRUSHED -- the game wasn't as close as the final score.

To blame it on the refs is weak, very weak.

VanVleet's comments are right on. Unfortunately, Kelly will be making 2 million next year and that is all one and done's care about at the end of the year. Unfortunately, can't say I blame them. Recruit differently.

This shouldn't have surprised anyone. There were a lot of similarities with the Temple game, which ku lost in pathetic fashion. Why? Because the ku guys can't play man defense on the perimeter, Self won't play zone, and Self's offensive creativity is severely lacking. When your team can't play man and as result is fouling, is it that difficult to realize zone is needed?

1 out of every 4th team ends up beating us in the first weekend...

Wish we could let this team go and start over w/a disciplined team.

Actually in the Bill Self era we have gone home the first weekend 5 times in 12 years or 42% of the time!! Not a stat to brag about. It is great we make the dance but this crap has got to stop. Bill just tied Roy in this stat and in less years! Maybe it is time to lower the pedestal that we have put Bill on? Maybe we need to look at the talent quality of Bill's One and Doners. I think I would rather had a Baker rather than Qubre! To me a one and done should make a impact in almost every game they play in. Other than Joel we have not seen that quality of player. We went home last year because Joel was not playing and Wiggins was not an impact player. Bill always picks up the late one and Done player that never signed with the other Elite schools. Its like we are always getting the hand me downs. Cliff Alexander is the poster child of this quality player. He was such an impact player he barely started and his parents were so greedy they couldn't even wait a year to cash in.

Wichita payed w/heart and desire. To me it looked like we played scared. Once again the winning coach made decisions to win and we played not to lose..

Best team in Kansas = the Shockers

Walter, I hope this third-rate software only posts one reply from me!

If two teams are at least reasonably matched in talent, one team determined to win, the other afraid to lose, we can expect this kind of result 9 times in 10 games.

If the refs really wanted to help us they would have made Brannen Greene suit up for Wichita State.

Gross! Greg Marshall looks like a pedophile with his squirmy little half-grin and wannabe Craig Sager suit and tie collection. Marshall didn't have to make any unique coaching adjustments, his players were just better. They hit threes and out-hustled us. Now if you make a case that we should pay Tom Izzo a couple million to come in and coach us through the tournament at the end of every season I might listen...

Who cares what Marshall looks like? He does more with less, while Self does less with more!

It fries my shorts to hear a KU player tell the media after a loss that the other team 'wanted it more'. How is that even possible, especially in an NCAA tournament game. This team has had 'energy problems' all season. Coach has harped on this and tried everything he knows to do; coaches can't teach heart. Very disappointed in many of the players. Kudos to Frank, Devonte and Perry for their fine efforts.

My hope more than anything else is that hopefully Self feels the heat from this. My guess is he will, but we'll see.

Personally, I'd like to see some tougher players recruited with a better edge (especially mentally) than Self has been getting the past few years. Hard work is a skill. While we have a team that has some hard workers, to often our team gets dinged for not giving it their all -- with yesterday being put up on a platter as example "A".

That said, this was Self's least talented team since he's been here, part of that a by product of the one-and-done stretch of Wiggins, Embiid. Im sure Oubre will go pro. Alexander may have no choice after his Mom is cashing checks on his future income already. Hope next year's class is tougher than this group though. Because thats whats lacking at this point.

Bryce you have put that lobotomy off for too long. Get that appointment set up.

Thanks for the laugh, Mick. 😀

I got just what I expected in the tourney. All season I saw a team that had little intensity. I also saw a coach without intensity. Coach self has been a really good coach but a lot of the time he just didn't" seem to be there. I love KU and always support them, I think coach self is great but he seems preoccupied. Go Jayhawk football.