DeBose replaces the injured Devonté Graham on KU’s University Games roster. The Jayhawks will play Canada Tuesday and Friday in KC’s Sprint Center then play in the Games July 3-14 in South Korea. 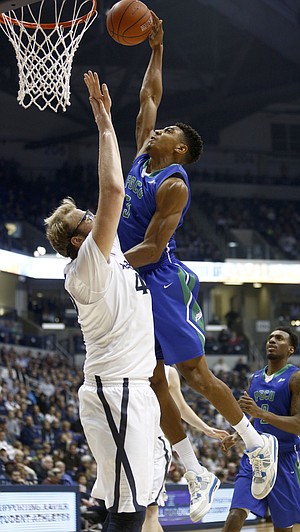 “He’s a 6-foot-4, 200-pound guard who has been playing for Joe so he understands at least in theory what we are trying to do both offensively and defensively, Self told the Journal-World.

“Joe wanted us to take him all along,” Self added. “We decided to take our guys plus Nic (Moore, SMU). Then when Devonté got hurt (quad injury) we obviously needed to add somebody. Julian arrived in Lawrence this afternoon and he’ll be practicing with us starting tomorrow and be a part of the KU contingent from this point forward in getting ready for the World Games,” Self added.

“Joe said he will remind us a lot of (former KU guard) Travis Releford,” Self said. “He’s got good size. He’s a jack of all trades and a great energy guy.”

Prior to attending FGCU, DeBose played two seasons for Rice University in Houston. In his final season with the Owls (2012-13), DeBose started all 30 games and averaged 10.4 points and 4.3 rebounds per contest.

"I want to thank coach Dooley and coach Self for this opportunity," said DeBose. "I'm extremely thankful, excited and honored to represent my country.

Dooley said: "It's a terrific opportunity for Julian to not only represent the USA but also to play against some of the best competition at this level in the world," added Dooley. "For him to be selected is a testament to all the hard work he's put in, and we're looking forward to watching him in action."

All in the Family

Welcome aboard Julian! It appears you are used to wearing Blue! But, I assume our team will be wearing Red, White, and Blue. Team USA.

I dont know Debose at all. But Brett Comer wasnt available? Dude is a machine.

May play a lot like Tyshawn Taylor. 31% 3gun not the best, but I do like the 4.3rpg. I like the aggressiveness to try to finish over an opposing center as in the photo.

Unsure of what his nickname "Half a Bucket" means? Usually, when someone is nicknamed "Buckets", that's a good thing...but "half a bucket"?

Honestly, MANY new faces if you add Julian + Nic to KU's Bragg + Vick. And Greene and Graham, 2 of our best 3 shooters cannot go. With a 24sec shot clock, our core of vets will have to carry the load of executing Self's stuff. The other option is go dribble-drive, as Mason can do that, and the word is that Vick and DeBose can also.

We are NOT the strongest KU team due to injury x 2 and 2 foreign-born players who cannot play. Imagine how much better this KU team would be with our own 4 missing guys...

At least Bragg and Vick can play in some serious games, and Selden and Ellis can establish confidence and dominance. I'd like to see what Hunter can do. Hunter + Lucas must play big.

Just call me Stupid Michael but I am worried that if KU falls flat on it's face in this tournament, it will cast a pall over the season. Come on, this is not about our school or our league, we are representing the entire friggin' USA and anything less than a championship will be viewed, unfairly as it sounds, as a failure and a black mark against our legacy.

Somebody please assure me that the other countries aren't shipping over their pros with falsified birth certificates!!!!