The Kansas University sophomore guard from Ukraine today celebrates his 18th birthday and at 6-foot-8, 205 pounds — 15 pounds heavier than this time in 2014 — is physically resembling a major-college player more than the high-school-aged person of a year ago.

“I’m trying to develop everything. I’m trying to get better at some of my weaknesses and get stronger. I think that (strength) is one of my biggest weaknesses. I try to go to the weight room more than anybody else and work out,” Mykhailiuk said Tuesday afternoon in Allen Fieldhouse, a day after returning from a month-long stay back home in Cherkasy.

Asked what KU strength coach Andrea Hudy has in store for him this summer, he said: “Most of the time, I focus on my upper body, because my lower body is a little bit stronger. I need to focus a lot on my upper body when I’m working out with her — squats, bench, incline. Every time is different.” 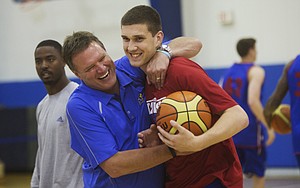 Mykhailiuk, who averaged 2.8 points and 1.2 rebounds while logging 11.2 minutes a game in 28 games his freshman season, said he had a productive four weeks in Ukraine mentally and physically.

“Yes, I needed to go back home. I needed the rest. Everybody needs rest,” Svi said. “I missed my parents and friends, so I just spent time with my parents and then went and chilled with friends. I went downtown with my friends and worked out with my team (members of Cherkasy Mavpy SuperLeague squad).

“I was working out a lot, trying to prepare for next season, which is very important for me. I worked out at my gym, and I was with my team. Most of the practices I was doing individual stuff with my home team and coach,” he added.

“I’m not just going to shoot three-pointers. I’m not that type of player; I’ll try to do whatever coach (Bill) Self needs from me,” Mykhailiuk said.

“Everyone (back home) is excited to see me play next year. They say I’ll do well next year,” he added of the 2015-16 season. “I’m getting older. I’m not a freshman. That was a great experience for me (last season). I’ve been in the system, and I think I’ll feel more comfortable. Mentally, your first season ... for freshmen, it’s hard every time. I’ll be good next year.”

Since he’s from Ukraine, Mykhailiuk cannot compete for KU in the World University Games. Svi can take part in some practice situations in his role as team manager.

“Probably not,” he said, asked if he’d make the trip to South Korea for the July 3-14 Games. “I’ll probably be here working out.”

For now, he’s happy to be settling back in the USA. He arrived back on campus at 8 p.m. Monday. His total flight time was over 14 hours, counting the connecting flights in returning from Ukraine.

Recruiting: Paschal Chukwu, a 7-foot-2 former Providence player who has announced plans to transfer, visited Iona on Monday, Zagsblog.com reports. He will visit Virginia on June 19, Michigan State on June 22 and will also visit Syracuse and UConn, CBSsports.com indicates. He has visited KU and Nebraska.

Paschal has announced that he has rented an SUV and will visit Univ. of Washington and work his way down Highway 1 all the way to San Diego State, hitting Oregon, Oregon State, Gonzaga, Pepperdine, San Jose State, USC and UCLA along the way. :)

I know this was intended to be humorous but it comes across to me as a bit crude. The kid made a mistake with his first choice of school. I think it's the smart thing to do to assess several options before making the next choice. No offense towards you intended. Just wanted to make my point.

Sounds like he does not know what he is doing Dale, not just a mistake with his first choice. It would be smart of him to narrow down a list of what type of style of game played he wants to be in, seek out those specific schools that play the way he would like and have a scholarship, visit them in order of playing time available, growth, major he wants to get, whatever is important to him. Then move forward with specific visits to those schools. He seems a bit aimless right now. It does not make much sense. Just like his visit to KU after they used up their last scholarship. It looks like he is just on a road trip for the summer...

Google is not showing anything about this so I assume the SUV comment was satire. Did I miss something?

Who looks happier in that picture, Svi or Self?

I think Aaron Miles looks a bit confused in the background.

Added strength didn't save Andrew White III's KU career. Svi is a better all around player, but if he wants to avoid the same thing, he can't just get bigger. He's got to be a better defender too. Especially in pick and roll or pick and pop.

Svi is a 5 star recruit who Bill Self hasn't recruited over twice like he did with mid 4 star AW3. After AW3's freshman year, Bill Self lucked into Andrew Wiggins. After his sophomore year, Self landed Oubre, White transferred, and Self replaced him with projected starter Svi. AW3 also never projected as a 1st round draft pick like Svi does in the next draft in 2016. Whether Svi plays to that projection or not is a different story, but the fact that multiple draft projection sites currently have him as a mid 1st round 2016 pick should tell you there's a lot talent and potential in Svi.

Actually Self did recruit over the top of him. He just wasn't able to land the guy (Jaylen Brown) that he was targeting.

Actually, no he didn't. Once Svi confirmed he was coming back, Self completely back off Jaylen Brown and KU was never seriously linked to Brown after that point.

The source is Jaylen Brown and his twitter account. After Svi confirmed he was coming back, chatter involving Brown and KU dropped significantly. There were occasional tweets about KU, but not with the frequency of around the time of his visit and between his visit and Svi's announcement. The logical conclusion would be that Self backed off Jaylen Brown because he preferred Svi over Brown.

So you are saying Self backed off Brown so he would not recruit over Svi but decided to recruit under Svi by adding Vick?

Svi and Vick do not play the same position. Svi is a wing and Vick is a combo guard. Vick was recruited as depth behind Mason, Graham, and Selden.

Correct again. Benz is reaching what a surprise.

I'm looking forward to seeing how well AW3 does at Nebraska this year. I would be surprised if he doesn't do well in the BIG 10. He just got caught in a bad position at KU and having an injury just as he was getting increased PT didn't help.

Atta boy Svi, put on that freshmen 15. Hope its an indication that not only is he hitting the gym, but also eating well and partying well too. At least that was my formula back in the day.

In the late 80s it was Pizza Shuttle and Milwaukee's Best!!!

Is the "Hole In The Wall" still around?

Just a couple of points. I respect your opinion, Dale, but I don't think that Tony was trying to ridicule Mr. Chukwu. I may be wrong but I think he was mostly just mocking the process and expressing his boredom about all the articles on his odyssey.

Tony is a very clever gentleman who graces this site often with his views which I enjoy. Can't speak for Tony, but I expect that he wishes the best for Mr. Chukwu, just as you and I do. Would love for him to become a Jayhawk, but odds look slim since we currently are out of scholarships to offer.

Just have to love the picture of Svi and Coach Self. Their smiles and rapport are priceless. Is it any wonder why so many young men want to play for Coach Self?

I didn't think Tony's comment included any malice, just thought it was a bit hard on a kid who doesn't want to make the wrong choice twice in a row, knowing he probably would not have a third choice. As for the boredom part, that I can understand. I probably just overreacted at the time.

Sorry if I upset anyone. Harlan is exactly right..I was born the class clown and just thought his odyssey is amusing but I only want what's best for him and, somehow, if that becomes KU, I will be thrilled.

Sorry, Tony, I took your comment differently than you intended. That's one problem with written social media, it is too easy to misinterpret intent. Thanks for your lack of venom in your reply.

What an awesome pic! This is what it's all about! Svi will be very good in the league someday. The question, as with all these 5 stars is will he be really good for KU? I'm rooting for him!

Anybody else notice Bragg putting the ball directly into the basket w/authority and not kissing it of the backboard?

Little late getting back after my original post, but want to let both Dale and Tony know that I agree with them wholeheartedly. Look forward to sharing insights with both of you in the future.