Former Kansas University center Sasha Kaun tells the Journal-World that, contrary to published reports, he has not retired from pro basketball.

“People have been calling and e-mailing me saying, ‘Congratulations on your retirement,’ and things like that. I said, ‘Oh, OK,’’’ the 30-year-old Kaun said today in a phone conversation with the Journal-World from Moscow where he plays for CSKA Moscow.

“Even my agent told me people are all talking in the U.S. about my retirement. As of now I’m done playing in Russia and pretty sure I’m done in Europe, but I’m not done, done,” he added with a laugh.

His official stance on Monday’s reports that he’d retired? 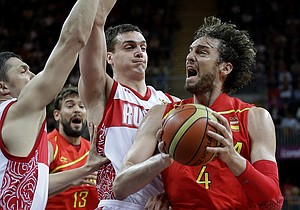 “If I have the option to play in the NBA, I’ll look into it and consider it,” Kaun told the Journal-World. “I’ll see what my options are. If there are none, we’ll be done.”

Kaun’s rights are held by the Cleveland Cavaliers.

“My agent will be talking to them figuring if they want to sign me or trade me,” Kaun said. “I’m open to whatever opportunity comes and will consider it,” added Kaun, who averaged 9.9 points and 4.5 rebounds for CSKA this past season.

“He was my coach. I worked with him several years on the Russian National team. He was my coach all the way on the European championship, the following year the world championship for the Olympics. He’s a great coach,” Kaun said.

One report on Monday said Kaun was tired of basketball.

Not true, he said.

“No, I love it,” he said of the game. “I’ve had seven great years here with the team. I’m really fortunate and happy I had the opportunity to grow and have done all the things we’ve done with the national team. It’s been really great. It’s a good time for me to take the next step or try to figure out something else.”

Kaun and his wife, Taylor, have a 2-year-old daughter, Nika. And a boy is on the way in November. Kaun, who makes his offseason home in Denver, said he’ll attend the KU-Canada exhibition game on June 26 in Sprint Center.

Nice update on Sasha. Will always remember his contributions to the 2008 championship season.

Kaun's degree was in Computer Science, and he was selected to the Academic All Big 12 Basketball Team for three years. I would guess he'd be incredibly successful at whatever he felt like doing after basketball. Crazy to think he's only 30.

Such a good guy. Enjoyed watching him develop over 4 years. I don't recall Sasha needing double team help. If memory serves, he could guard his man solo (Jr & Sr seasons), and that was a contributing factor to the great defense.