Norman, Okla. — Maybe Kansas University should lobby to move up all its start times.

With the threat of a winter storm looming, Oklahoma officials moved up tipoff for its women’s basketball Senior Night meeting with the Jayhawks by an hour Saturday.

And the Jayhawks responded with a quick start they carried over to a 65-58 victory over the Sooners at Lloyd Noble Center.

“I told them the last time we won (at OU, in 2013), it was Senior Night, and we hit our free throws,” KU coach Bonnie Henrickson said.

The Jayhawks (14-16 overall, last place at 5-12 in the Big 12) followed the same script Saturday in snapping a six-game losing streak. 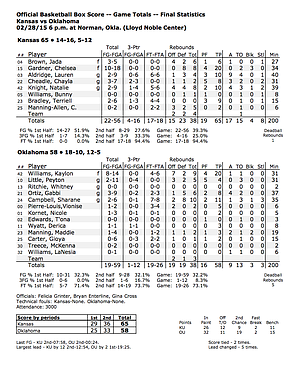 Senior forward Chelsea Gardner led the charge for the Jayhawks with 20 points and eight rebounds.

Kansas will holds its Senior Night on Monday against Iowa State. Tipoff is 7 p.m. at Allen Fieldhouse.

Kim Mulkey is a great coach. She has done a great job at Baylor. KU would be lucky to have someone like her coaching here. But since that isn't going to happen, maybe we should go after Hutch Juco's John Ontjes. He might be able to turn things around for the women's team.