Izzo: ‘A dead man can make a layup’ 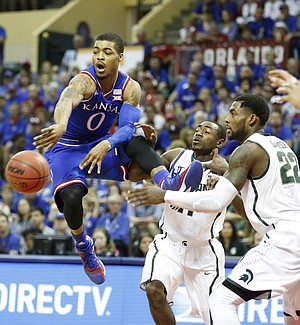 Kissimmee, Fla. — High-flying Michigan State senior forward Branden Dawson, slowed by the flu since Monday, might have a get-well card waiting for him upon his return from East Lansing, Michigan, but it won’t be from his coach, Tom Izzo.

Dawson grabbed nine rebounds, but could only get four of his 15 shots, most from near the hoop, to go down. Izzo was asked if he thought his struggles were related to his lingering illness.

“I’m just not going to comment on that,” Izzo said.

And then he commented on it.

“I think a dead man can make a layup,” Izzo said. “We missed some layups, and I’m very disappointed in that. But you know, when you’re sick — some people play well sick, some people don’t. Michael Jordan played well.”

For a long second-half stretch, the pace was so fast as to be hurried, and both teams took it hard to the basket, maybe too hard to shoot with a soft touch.

“We missed a lot of layups that (we) usually hit,” quick point guard Travis Trice said. “I know, myself, I missed a few. Just the ball falling the wrong way for us. Those are shots we hit every day. Not to take anything away from them, but those are shots we make every day. I think it’s more on us.” 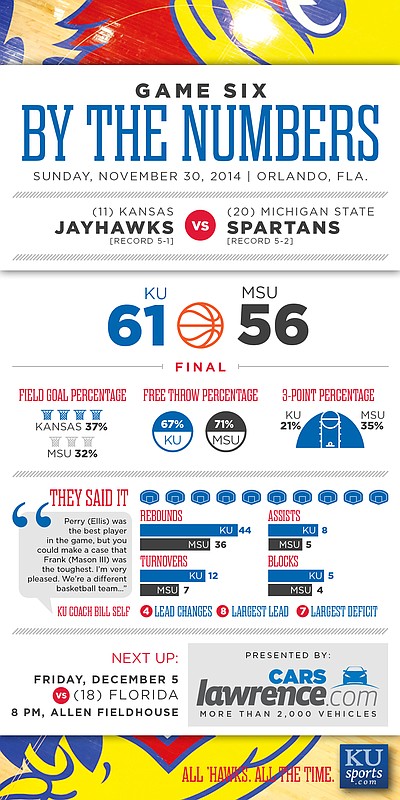 Played better than you dingo!

He has a point though. Our defense was great but we looked just as bad on offense as they did for long stretches. Can't wait for the game where we get both offense and defense rolling. This would have been a blowout if we could have hit shots.

Interesting who Self had in at the end of the game....Jamari, Svi. Players he trusts, I guess.

It's always been said, it's not who starts the game but who finishes...

He was going to sub Brannen for Mari, because he knew it was hack time, but changed his mind and instead left Mari in for the inevitable FT's. Told him he was going to make them. Big confidence booster. We'll have to see if it makes a diff in the long run for the 64% FT shooter.

Man, how can we not pull for Jamari Traylor. The kid almost single handedly helped us avoid a Mercer-exit in the first round by dropping 17/15 on EKY (prior to Stanford). I'm really happy Self chose to trust him, and he responded. Self is basically building Jamari from the ground-up.

And frankly, you see why Svi plays, he has a feel for the game, and experience beyond his years. Its that simple. He is a 5star recruit, who is able to deliver now. He is a more all-around player than even Greene, and I love Brannen Greene's shot (just not his D or handles yet...).

Oubre on a steep learning curve...not worried about him. Not going to transfer, as sitting out a year doesnt help make him better. Battling a bunch of Bill Self's other high-ranked 6'5-6'8 guys in practice is his best yardstick. He (& his dad) are good, bright people. Kelly Oubre will be fine. And Self will keep testing Kelly, giving him some minutes, to see if/when the light bulb comes on and everything clicks. Just give KO some time...

I agree with Izzo MSU played pretty bad, we played just a notch above that. That was a hard game to watch. They missed 7 bunnies 5 in the second half. They make just 50% of those lay ups and we lose that game.

It's a W but nothing to hang your hat on. We will take the trophy and get ready for the next game.

Missing bunnies can be a sign of being tired and conditioning. Izzo is a great coach and I'm sure works their butts off. Some days you just miss those. Lots of examples of games we let get away missing bunnies and free throws. Good teams win ugly games. I'm proud of our guys! I hope there is much more to come!

I am not sure I agree Timothy. There are many reasons teams miss easy shots, including how better our defense is playing right now compared to last year. We do hustle like teams in the past as Benz says below.

I think KU played a little better than MSU which did not play that well. I agree with Suzi we have to shoot the ball better if want to continue to win, especially against talented teams, like MSU. We can not hope that they will miss so many easy shots to win the game. We have lots to improve on still.

I am also proud of our guys for playing tough but let's face it, if MSU had been making their easier shots, it would have been a blow out win for them,aka KY.

We have got to shoot the ball better, from the field and FT line, in these tough games.

Well we got to the FT line alot, Selden kept the pressure on in that dept...and we hustled for rebounds, usually a Izzo-team trademark...and just maybe our D (or the fear of Cliff) caused those awful, awful botched layup attempts. Izzo is spot on to be pissed.

And Self seemed pretty darn happy with his team's D, let's not lose sight of what Self himSelf said about it. Sounded darn near prideful in this team's D effort.

Thank god we finally out-toughed Michigan State, finally...You know the 3 straight KU losses to MichSt had to be gnawing at Self, the former Big10 coach that he was...

A good, name win, well-fought. You can say MichState could have hit more, and we can say that maybe Selden goes 3-for-10 (still bad) instead of 0-for-10, so hard to say much hypothetically. We are good at doing that with KU football, but shouldnt have to with KU basketball. Take the W. We got Duke, got MichState, own UNC, and now got KY, FL, AZ in our sights, whenever, wherever we can get 'em...even Africa...(lol!)

If a dead man can vote, he can definitely make a layup.

Agreed, I would add - if a corporation can be treated like a person, without a pulse, then a dead man can make a layup.

I will give at least partial credit to the KU defense for always hustling back and pressuring those attempts. KU blocked and harassed every shot attempt at the rim by MSU and it looked to me that they were thinking about it every time they went to the rim. We had the same problem against Kentucky. Nice to see the guys hustling and pressuring.

Izzo just hates to lose and is angry. I guess I watched a bizarro alternate reality of the game than some of you commenting above. Did you see that at the end of the game Michigan State had the ball for 25 or so seconds and could not even get up a shot? Kansas players were all over them. It was very impressive today, I want a team that wins because at the end of the game the other team cant score...This was a big game, had not beat them since 2003. Bill needed some revenge on Izzo and got it. We did them like they have been doing us.

I do not see how it would have been a blowout if they made more "bunnies." Wayne Selden went 0-10 from the floor. I will give you their 7 bunnies, if selden makes 40% of his shots, Bill doesn't get T'd up, and Perry Ellis makes more than 50% of his free throws. If we are going to think that way, I see that as a one possession game and they could barely inbound the ball or get a shot off in crunch time. So I like the chances of Kansas anyway.

We missed a bunch of shots too not even counting Selden's O'fer.

Oh, and never take Svi out. I watch him, the ball moves. I would like 3 of him. He is even good enough to get his own shot I believe against a lot of defenders. He plays on national teams, he has faced good players.

We were tough, I like that. This team will be fun come March.

Nail on the head, Colby! My thoughts exactly, said similar things above...

I like to keep needling my fellow Jayhawk fans by saying that when we watch Svi play and with the instincts he has, we are literally seeing the reason Frankamp transferred. Connor wasnt going to ever be 6'8, or go get rebounds, or defend like Svi already can. Frankamp saw the writing on the wall, and it was in Russian (or Ukranian?). Greene hit his shots, and is 6'7. And didnt we just see Frank Mason go 50% from 3-range in this whole Orlando tournament? And he's being very selective with his 3attempts...But when Frank drives it, he has a gear that Frankamp does not. When Frank skies for a rebound, I never saw Connor do that. Connor wanted a bigger role, but knew he wasnt going to be able to compete on/against this roster. He saw it, felt it, and tasted the bitter lesson. It was his decision for these reasons. Now he gets to be relief minutes next season for Ron Baker at WSU, but unfortunately that is a drop-off, 6ft sub for a 6'4 big athletic combo guard. Dont really see him as a replacement for VanVleet, as Fred is almost another Frank. If Fate had only given Frankamp (& Sherron) another 3-4 inches in height...

agreed, you can say IF, IF, IF will it wasn't if a lot of those misses was Ku defense played really well on the defensive if you wanna get picky enough you can always find something I think we have made great strides on the defensive end of the court I really like Svi but everybody has said commented what a great shooter he is well until yesterday other then spotty shot here, a shot there I hadn't seen it, what I have seen from is I am really surprised how well he plays defensively plays really good defense, and the other intangables ball handling, passing, and such maybe his shooting touch is coming showed signs yesterday team looking better GO HAWKS

Dawson. Trice. Valentine. Nairn. Costello. Schilling. That was a decent team. It was a good win. Maybe it isnt a 100% Izzo team yet, but then the current KU team isnt a 100% full-fledged Self product yet either. The only thing obvious in November was that KY should be a shoo-in for the Final 4/NC game, while KU had a LOT of improving to do. We've started down that road nicely. Hope we make the F4.