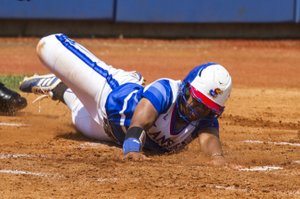 Kansas senior Ashley Newman reaches for home plate as she slides in for a run during Kansas' game against Iowa State, played Sunday afternoon at Arrocha Ballpark. The Jayhawks swept the series against the Cyclones with a 4-2 victory. 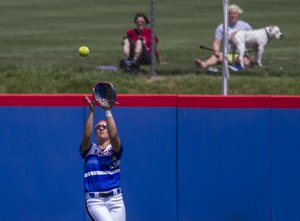 As a pair of fans watch from over the right field wall, Kansas senior Taylor Hatfield hauls in a fly ball during Kansas' game against Iowa State, played Sunday afternoon at Arrocha Ballpark. The Jayhawks swept the series against the Cyclones with a 4-2 victory. 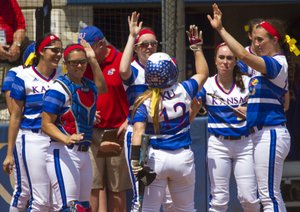 Teammates meet Kansas sophomore Chaley Brickey at the dugout after she scored a run during Kansas' game against Iowa State, played Sunday afternoon at Arrocha Ballpark. The Jayhawks swept the series against the Cyclones with a 4-2 victory.

There were no fireworks, but Kansas University’s softball team put on a show in its final home game on Sunday at Arrocha Ballpark.

The Jayhawks, who will move into a new facility at Rock Chalk Park next season, completed a weekend sweep over Iowa State with a 4-2 victory in their regular-season finale.

It was only a prelude to a bigger celebration when the Jayhawks found out seven hours after the game ended that they made the NCAA Tournament for the 11th time in school history, their first appearance since 2006.

The regional, a double-elimination tournament, is hosted by No. 15 seed University of Missouri (41-16) and also includes Bradley University (27-30).

“I am so excited for our team,” KU coach Megan Smith said of the Jayhawks earning a bid. “They are a special group and have worked hard. They have fought all season long for this. This is not just for our current players though. For the last five years, every player and staff member has worked extremely hard for this moment. We are happy to share this excitement with them.”

The Jayhawks ended the regular season with their strengths that carried them all season — pitching and defense.

Sophomore shortstop Chaley Brickey made a diving catch in shallow left field over her shoulder, and freshman catcher Harli Ridling ran down a few pop-ups in foul territory.

KU gave Pille an early lead with two runs in the first inning, when Maddie Stein brought a runner home with a single and Ridling was hit by a pitch with the bases loaded. Pille wouldn’t need much more help, allowing just two runs on six hits while striking out four in a complete-game effort.

“It’s always nice to get (run support) from the beginning because you can, well, not relax … you know what I mean. Just having a little cushion is always a good thing,” Pille said.

With the wind blowing out, Iowa State (23-31, 2-16) sophomore Aly Cappaert lifted a ball into the jet stream and over the center-field wall in the second inning. Pille then allowed just two hits from the next 15 hitters she faced.

“Against a really good-hitting Iowa State team, I thought she came out and was just determined and fought all game,” Smith said. “That’s what you get from Alicia Pille. She cares out there, and she’s out there for her team. I thought she was phenomenal today.”

Before the Jayhawks look ahead to the NCAA Tournament, they were glad to end the regular season the way they had hoped.

“This last weekend was all about our seniors and bidding farewell to this ballpark,” Smith said. “We wanted to do this park justice and our seniors justice. We did that.”

The softball team is a perfect example of why I'm not ready to call for Charlie Weis' head yet in football. Maggie Smith took over a softball program that was a mess a few years ago and has steadily improved the team each season. Last year, they pulled a massive upset over Oklahoma who won the national title and was far and away the best team last year and that was a turning point for the confidence of the team going into this season.

The time line of improvement in the softball program is pretty much on par with what I hope happens with the football program as well. Just a steady amount of improvement each year that may not be noticeable at the time. I did see improvement in a lot of areas in year 2 under Weis and where there was regression, Weis did what he reasonably could to address those areas. Just like softball was not an overnight turnaround, neither will football be, but both are headed in the right direction.

Congrat's ladies. Good luck against NU! Very proud of you and the program. Can't wait to see the new stadium. Rock Chalk!