League touts title purity — except when, you know, there’s a tie 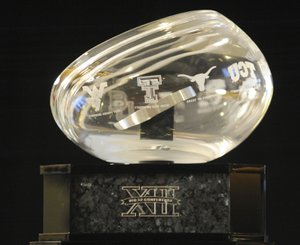 The Big 12 Conference’s ability to implement a full round-robin schedule distinguishes it from the other four power conferences, all of which boast more than 10 teams. It is that unique characteristic that led the league to its slogan: one true champion.

In football, every program faces all of its conference foes once each season. There is no dodging powerhouses, as sometimes occurred back when the Big 12 split its teams into North and South divisions. The one true champion, the league wants the public to know, is determined on the field of play. The Big 12 even created a website, onetruechampion.org, to hammer home its motto.

None of that fooled Kansas University senior wide receiver Nick Harwell. The transfer from Miami (Ohio) might be new to the conference, but he knows how the system actually works.

“What I do not like about the setup is there’s a chance to tie for the championship,” Harwell said at Big 12 media days.

Apparently not. The explanation is right there in the conference’s football media guide: “The Big 12 Conference champion is the team that finishes the regular season with the highest winning percentage in conference games. If more than one team has the same winning percentage, the tied teams are declared co-champions.”

That stipulation, Harwell declared, is the only facet the receiver would change about the league he now calls home. His first three seasons of college football, he played in the two-division Mid-American Conference, which has an annual championship game.

“I like there being a definite winner and loser,” said Harwell, who caught five passes in Miami’s 2010 MAC title-game win over Northern Illinois, as a freshman. “I don’t like to share something with somebody else.”

In the case of co-champions, at least, the on-field winner won’t get hosed in the postseason. A head-to-head tie-breaker decides which of two co-champs earns the more desirable bowl destination.

In the less likely case of three or more teams finishing with the same record, a series of three tie-breakers that involve conference records and College Football Playoff rankings is implemented before the last resort: a coin flip.

Even if the Big 12 doesn’t end up producing a bona fide champion each season, Harwell and senior teammates Ben Heeney, Jimmay Mundine and Cassius Sendish all enjoy the chance to clash with the entire league.

Heeney, a linebacker from Hutchinson, grew up a KU football fan, so he knows the schedule used to look quite different before the modern age of conference realignment began.

“I think the year we won the Orange Bowl (the 2007 regular season), we didn’t play Texas or Oklahoma,” he correctly recalled. “When you play everyone, you really get to see who the best team in the conference is, and I think that’s good for the conference.”

Indeed, even if two teams tie atop the standings, everyone knows who won the head-to-head meeting, despite the multiple trophies that would get handed out.

Sendish, a safety, expects the regular-season gauntlet to challenge even the most talented teams in the Big 12 this fall.

“I think the league is wide-open,” he said. “So anyone can go in there at any given time and win the league.”

Mundine doesn’t care for championship games, because a lesser team could have four extraordinary quarters and knock off a program that accomplished more in its season.

The tight end said the Jayhawks, picked last in the league’s media preseason poll, will try to be that one true champion, just like all of their Big 12 foes.

“Obviously right now nobody expects that out of us,” Mundine said. “Secretly, in our room, we expect to win.”

I don't understand. The head to head tie breaker that is mentioned: is that referring to the game the co-champions played during the season? I would think that would decide who earned the championship. This article makes it sound like there is a tiebreaker game if needed to determine the champ. What am I missing?

As a tie-breaker — for bowl selection purposes — between two co-champions, the league uses the head-to-head regular season game between the two teams.

Amazingly this carries over to other sports as well. We all remember a couple years ago that somehow the Cats "tied" us for the basketball title, and got a trophy, even though we won both regular season games. Just for good measure, we beat them a third time in the Big 12 Tourney (yes I know the tourney results has nothing to do with regular season).

I am not opposed to both teams getting trophies if there is a split of head to head games, or like basketball used to be when you didn't play everyone twice. But in cases like I just described where one team wins twice in basketball, or the head to head winner in football, that team should get the trophy, period.

Or Oklahoma State, or Oklahoma, or Baylor...

There is also the issue of the round robin tie. A few years back Texas-OU-TT all tied with the same record, and they beat each other in a round robin (Texas beating OU, OU beating TT, and TT beating Texas). Even beating someone head to head is not enough to break the tie alone. That said....I see your point about K-State last year. Kind of funny to lose to someone twice, officially tie with them, and then lose to them a 3rd time.

It doesn’t make sense to “hammer home” One True Champion if you allow a tie. That’s stupid. So easy to just give the championship to the winner of the head-to-head. What’s the hangup?

If there is a 3 way tie, or more, then the teams would be ranked by wins against the other tied teams. If they all end up with (for example) one win each against the others, you would have a very rare tie. But maybe 100-1 of that happening. Which means it would probably never happen.

This would also intensify regular season match-ups between the favorites. The Oklahoma v Texas game would become even more important. It would represent an extra half game advantage toward the title.

Jay -- if I understand your scenario correctly with the 3 way tie, that did happen a few years ago with Texas/OU/TT. OU won the tie breaker, and if memory serves they used BCS standings to break that 3 way tie. There was an uproar over that, so the Big 12 changed the rules to something else -- not sure what it was. The shame of it all is that OU ended up playing Florida for the national championship, and I think most of us thought Texas was a better match for that game.

That was 2008. All three teams had gone 1-1 against each other. A true tie. The difference is we still had a conference title game that needed to be filled with two teams, so a tie-breaker had to occur.

As the league stands now you could allow that tie and let the bowl committees pick the teams they believe are the best.

Or you could decide another form of tie-breaker (common opponents in the 2008 scenario?), declare “One True Champion” within the conference, and still not screw the other teams out of national bowl opportunities.

In today’s Big 12 I think a good final tie-breaker in that scenario would be overall record, RPI, SOS or a combination of those. Still it wouldn’t affect the other tied teams because it wouldn’t lead to an extra game. They all end the season as-is from a bowl committee standpoint going into bowl season.

Here are the complete details of how a tie between 3 or more teams would be determined. Any time a team's record is mentioned, it means the team's Big 12 W-L record. The following is from the Big 12 media guide:

If three or more teams are tied, steps 1 through 4 will be followed until a determination is made. Once a team has been eliminated from a multi- team comparison, it is dropped from further comparisons. If only two teams remain tied after any step, the winner of the game between the two tied teams shall be the representative.

So you can have co-champions but only one team gets to represent the Big 12 in the CFP?

I like this scenario all the way up to the words “chosen by draw”. That’s no way to determine a teams destiny. If the rare case emerges whereas two teams tie all the way through the steps, let them play it out on the field. Have the super-rare Championship Game. Winner take all.