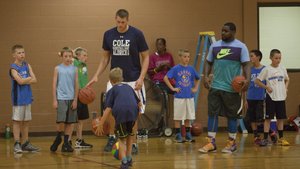 Cole Aldrich, who provided quite an inside-outside combination with 2010 All-America point guard Sherron Collins at Kansas University, teamed with one of the Jayhawks’ lead guards of the future in 5-on-5 pick-up basketball action Sunday.

“We went 6-and-2,” the ultra-competitive Aldrich said, recounting his and freshman Devonté Graham’s record in games contested the night before the start of Aldrich’s fourth-annual basketball camp in Robinson Gymnasium.

“I think he’s going to be a good leader,” Aldrich added of the 6-foot-2 Graham, who worked Day One of Aldrich’s camp with former KU players Collins, Mark Randall and Jeff Gueldner.

“It’s going to take some time for him to feel comfortable with the guys, (saying), ‘Hey, we are setting an offense up. You get there. Come off the screen.’ I think he’s going to have that trait, though. It’s fun to see a good guard with an open mind come in and just have fun. That’s what he did last night,” Aldrich added of his pick-up teammate.

“I didn’t throw him any lobs. I got him a couple post feeds, though, a couple easy buckets,” Graham said.

The pick-up games the last month or so have been eye-opening, Graham indicated.

“They are real competitive. Everybody’s trying to make each other better during the summer,” he said. “Coming from high school to college is a big jump. I’ve been trying to learn different things about being in the right place on the court and just different strategies we are going to use throughout the season.”

Graham said the biggest difference from high school and college is “just to be tough. Mentally and physically, you’ve got to be tough. When you get fatigued is when you have to be the most (tough), especially mentally, because you’ve got to push yourself through it.”

Graham said he has received a lot of help.

“Everybody. The coaches especially push me,” Graham said. “Elijah (Johnson, former KU guard) is a big push. He’s been teaching me a lot since I’ve been here, like defensive things, where to be on the court — helpside, doubling down on bigs and not getting caught up in between in hesitating on shooters and trapping down low, small things I’ve got to learn.”

Johnson, who played in Poland last season, “is a point guard. He knows the game,” Graham said. “He is just trying to help me out because he knows I kind of look up to him as a guard.”

The 25-year-old Aldrich, a free agent who will join the Knicks’ summer-league team in Las Vegas later this week after playing for New York all last season, said it’s valuable for incoming freshmen to receive pointers from guys like Johnson.

“It’s so hard to evaluate a kid when they’ve been here a whole month-and-a-half, maybe,” Aldrich said. “Coach (Bill) Self can’t do all the teaching he’s going to do during the season. The scenarios in pick-up games are a little different than they are in Big 12 play. He’s going to be good, though.”

Self has said Graham will have every opportunity to compete for the starting point-guard position with Frank Mason and Conner Frankamp.

“Without going into any detail, if you watched him play today, I mean, he’s good. He plays with great pace,” Self said on Monday’s “Jayhawk Sports Weekly” radio show at Legends Lawrence.

Self likes the intangibles in Graham.

“He asked me last week ... he said, ‘Why did we recruit you? Because you are a winner, that’s why,’” Graham said, smiling.

Graham, who rooms with freshman Kelly Oubre, said he has adjusted well to life in his new college town. He hails from Raleigh, N.C.

“I don’t think I’m homesick. It’s summertime, so of course I want to be back home. I like it out here,” he said, smiling. “I’m loving it so far, all the players, coaches … it’s a good environment to be around.”

This, that: Former KU guard Naadir Tharpe may be finished with college basketball after three seasons at KU. Reporter Mike Hopkins, who covers Providence basketball, wrote on Twitter: “Kansas transfer Naadir Tharpe is leaning closer and closer to turning pro overseas, per @GazetteUMass. UMass out of scholarships and #pcbb (Providence) not willing.”

So far, only Providence and UMass have been mentioned as possible transfer destinations for Tharpe. ... Former KU point guard Sherron Collins, who has been slowed by a hamstring injury, said his goal is to play professionally, perhaps overseas or in the NBA Development League, this upcoming season. He said he was considering a couple early offers ... Aldrich said there were about 65 youngsters enrolled at camp, which runs through Thursday.

Every time I see how overweight Sherron has gotten, it just makes me a little sad, remembering how good that guy was, especially his first couple years before he started to lose some of that fantastic athleticism he had early.

Hope he can get it together.

"He’s been teaching me a lot since I’ve been here, like defensive things, where to be on the court"

Like staying in front of Trey Burke in the final seconds of a 1 possession game . . .

That was two years ago. Get over it and move on. Have you done everything perfectly in your life? Give the guy a break already. These guys play their backsides off for this University and us entitled fans. I get really irritated when we jump all over them for a bad performance. These guys are human, just like us.

I commented 17 minutes ago, get over it and move on. Have you commented perfectly on every article here? Give me a break already. I work my backside off thinking up something clever for this University and us entitled fans. I get really irritated when you jump all over me for a sarcastic performance. I'm human, just like you.

I agree completely Glen. Not to mention that 39 point game at Iowa St...Elijah is forever good in my book

EJ is the man. Period.

He gets no breaks and he doesn't deserve one. Glen it's sports, people boo, they critique their teams, and they complain about them. For over 2500 years this has been going on. It irritates me when people want to get in a circle and sing Kum Ba Yah after a loss or when talking about a bad game. You think EJ is working hard while he is playing just for our school? He is trying to get to the next level so he can make some real money too. Do you feel great after a loss, I bet not, we all express it differently. The end of that MI game, like many things that happen in the lives of human beings are emotional because of the passion that we have invested.

Lol EJ teaching him??? What is he teaching him? I hope Graham does not pick up any bad habits. EJ was barely passable. Anyone who thinks he was great needs to start watching the games without their "homer" glasses on.

The art of shaving points??

Burke was closer to the mid court line than he was the three point line when he took that shot. Sometimes a guy on the other team makes a play and you have to just tip your hat.and accept it.

If it was one bad play I would agree, it was much than that though.

Feel free to talk about EJ's career as a whole. I was responding to the original post about his defense on that one specific play.

I was speaking about the last 3 mins of that game. Lucky shot sure, but EJ gave away that game.

On the lighter side ... Welcome to KU Devonté. Keep up the work. Keep listening to your coaches and I believe you will be a part of something very special .. Thanks for choosing Kansas. Enjoy the ride, it will be the best time of your life ...

So much for Tharpe moving closer to his daughter?

Because he is completely forbidden to take his daughter with him...

I'm not sure that Elijah Johnson is the guy we want Devonte Graham learning from on how to be a PG...

EJ did quite well in 2012 as a co-PG with TT, in much the same way that Coach is talking about using the perimeter players this year. Sounds good to me. The 2013 Lead PG/Burkesque impersonation didn't go well, but there aren't many NBA caliber PG's out there. Fortunately, Coach has been real successful in the past by having multiple combo guards. Glad he's remembering his roots.

Well if our standard for being a good instructor is you have to be an amazing player, then 98% of coaches at this level should be fired.

Loved how this went from an article talking about new talent to a discussion bashing EJ. Stay classy KU boards.