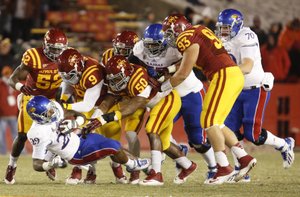 But Saturday, KU opponent Iowa State ended a losing streak and got a little taste of the joy that the Jayhawks experienced a week ago.

“It’s been a long time coming,” said senior running back Shontrelle Johnson, who finished with 84 yards and a touchdown on 13 carries in a 34-0 rout of the Jayhawks. “The season didn’t quite end up like we wanted, but this win was a big thing for us.”

To be fair, the Cyclones (2-9 overall, 1-7 Big 12) hardly were forced to endure the kind of losing that the Jayhawks had known.

ISU has been to a three bowls game since 2008 — the last time KU reached the postseason — and the Cyclones’ losing streaks that were snapped in dominating fashion on Saturday night were merely seven games overall and eight consecutive Big 12 losses. What’s more, victories over Kansas bookended the ISU streak, as the Cyclones’ last conference victory came in similar dominating fashion, 51-23, last season in Lawrence over the one-win Jayhawks.

To make things even more pleasant Saturday, the victory sent Iowa State’s seniors off on a winning note at home, something the announced attendance of 54,081 at Jack Trice Stadium enjoyed thoroughly after sitting through frigid conditions. In the locker room, where things were significantly warmer, ISU coach Paul Rhoads said the scene was wonderful.

“It was joyous,” Rhoads said. “There was a lot of thanks and expression by the seniors to the rest of the football team. They talked about the bright future of the program.”

Although the Cyclones have suffered through a rough season and been snake-bitten by several bad losses and a few close calls, there’s hope for them to finish with a winning streak.

Next week, they play at West Virginia.

“It’s not a season that we were predicting,” said ISU quarterback Grant Rohach, who finished 15-of-20 for 300 yards. “But to get momentum in the later part of the season is really good.”

Joe, that may be a true statement, but does it apply here? I saw us "saddled" with the same damn WRs we been "saddled" with all season long. The win against WVa was because of Mr. James Sims, not the WRs. This program never "turned" for the positive (passing game), so I do not agree that it's "fortunes turned" in the gravitous way that you are implying.

I am fully willing to condemn THIS batch of WR's (except maybe Josh Ford) for dropping pass after pass that hit em in the hands (from Heaps, not Cozart, who is nowhere close yet...), while we watch ISU WRs catching balls in the 5degree F weather ALL GAME LONG. Nick Harwell cannot become eligible soon enough, along with Pierson's return next season as well. Talent problems at WR have doomed this season, along with inexperience on the O-line (earlier).