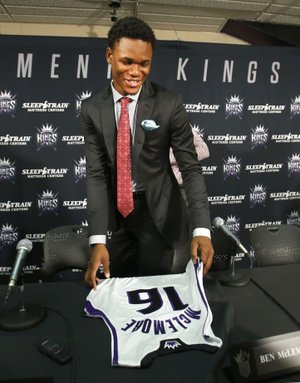 Ben McLemore, who wore jersey No. 23 his one season at Kansas University, has selected No. 16 for his rookie campaign with the Sacramento Kings.

“No. 16 means a lot in different ways. It can also mean 7 — lucky number,” former KU guard McLemore said at his introductory news conference on Monday in Sacramento, Calif. He was the No. 7 (or 1 plus 6) overall pick in Thursday’s NBA Draft.

“I’ve been wearing No. 23 all my life — my two brothers and three sisters. I thought of choosing a number that could symbolize a part of me. I chose 16 (in honor of) my mom (Sonya Reid) and her six kids. It definitely has a meaning to it, so I’m going to rock this for the rest of my time with the Kings (while veteran Marcus Thornton keeps 23).”

McLemore was joined at the news conference by the Kings’ second-round pick, Ray McCallum Jr., son of the University of Detroit coach.

“I can’t resist my line I had on draft night, ‘The Macs in Sac.’ Here they are,” general manager Pete D’Alessandro said.

“Ben’s story is the stuff of legend. This is the story of triumph and hard work over adversity — success against all odds. This is the stuff movies are made of,” Ranadive said of McLemore making it big after growing up in poverty in St. Louis.

“This is a young man (who), when he was a kid, didn’t know where his next meal was going to come from, and he went on to become part of and shine at one of the country’s great basketball programs. I know what Ben’s motto is, ‘Stay humble, stay hungry,’ and these are words we can live by, as well.

Ranadive grew up poor in India before graduating from MIT and Harvard and founding TIBCO Software in Silicon Valley.

McLemore was asked to identify the individuals who inspired him to get to this level.

“I think it’s just the people around me — my family members. In high school, I looked up to guys like Paul Pierce (former KU player and Boston Celtics legend) and LeBron (James, two-time NBA champion), but at the same time, I just had great people around me, and my family members all played basketball. So I felt it was the thing that kept me going — I just picked up the ball and kept playing and grew taller. I just stayed in the gym, working hard each and every day to get where I am. I’m just happy I’m at this point in my life.”

“The thing that excites me about Ben is he can shoot it from deep. We shot yesterday, and he was very impressive in how he shot — stationary, on the move, deep — as well as his athleticism and explosion, getting to the basket and playing above the rim, which is something that really excites me and I’m sure our whole fan base,” Malone said.

“It’s going to mean a lot,” McLemore said of his sudden wealth. “At the end of the day, it will not change the person I am, a humble person. I’m a person who will like to give back. Hopefully down the line I will have a chance to give back to my community. Now just to say I can take care of my family is a blessing and dream come true.”

’52 team members to be inducted: Three members of the 1952 Kansas men’s basketball national championship team — Al Kelley, Bob Kenney and Bill Lienhard — will be inducted into the Kansas Sports Hall of Fame (KSHOF) in ceremonies on Oct. 6 at the Hall in the Wichita Boathouse.

Ohio makes it official: Ohio University coach Jim Christian officially added former KU guard Anrio Adams to the Bobcat roster Monday. Seattle native Adams will sit out the 2013-14 season and will have three years of eligibility remaining for the Bobcats beginning in 2014-15.

“We’re excited to have Rio as part of our program,” Christian said. “He’s played on two state championship teams in high school and at one of the preeminent programs in the country at Kansas. We’re looking forward to working with him over the next four years.”

I wonder if Sacramento will match New Orleans' offer for T. Evans. It would be good for B Mac to play with him, I think. But obviously there's more playing time for guards should they let him go.

If he's gone Mc very well could start right off the bat alongside I. Thomas.

The most important detail for Sacramento is getting the Pelicans to make it a sign and trade with Greivis Vasquez. He was one of the NBA’s top distributors last year, and that, along with the breathing room at shooting guard, is what will help Ben the most.

D’Alessandro, and Brantz are going to totally rebuild the Kings. If they can swing that trade and lure Igoudala like they did last year to Denver, you will see an immediate uptick in Sacramento’s wins, and it would be perfect for Ben. Ben would have solid distributors and scorers on either side of him.

Those that achieve bottom up start out with only people to work with, so they learn some things from the beginning:

1) hunger is a motivator one never forgets and motivates the rest of one's life; and

3) talented people working hard and smart together are the only substitute for money;

4) you can never have too many talented, hard working people working together;

5) whoever has the most talented hardworking people working together wins the most.

Ben has lucked out again. He has fallen into another bunch of talented hard workers that understand hunger motivates some to win through teamwork.

The more money these kinds of persons get the more talented, hardworking, hunger driven persons with character they surround themselves with.

They know the more the better.

They know success with these persons is a numbers game.

Ewing Kaufman was once begged to build a winner in baseball.

He hired a man who knew talent the way Kaufman knew people.

They selected talented people with the kind of character it took to work together.

He got all the talent the draft could yield.

He got a the talent trades and buying players could yield.

Then he said how can I get more talent than others?

And he started the baseball academy.

It was not cost effective per player generated, but yielded him one extra player-- Frank White--that they would never have won without. It made his organization believe they would always have the edge in talent with character.

The new Sacramento owner gets it.

Ben will be okay in Sac.

Dittos, Jaybate. Plus, Ben is living proof to anyone who wants to blame their present failures in life on their upbringing, broken homes, or tough circumstances, that you can overcome your own obstacles by staying out of trouble, using your God given talents, and a lot of hard work. This is just the beginning for you Ben. Play hard! You've earned it.

Funny,the harder you work the luckier you get!

Nice analogy with the Royals. I sure hope that is how it turns out for Ben. Just hate watching T-Rob get bounced about from team to team. Glad Thomas (and Marcus Morris) are both out of Houston. McHale was successful as a player, not so much wearing a suit (see Minnesota before Houston). Next NBA season, Phoenix, Portland, and Sacramento games will all end up on my DVR. Love to watch those former Jayhawks.

On another note - I felt like Memphis made a big mistake letting go of Arthur. He was giving them valuable minutes when either Randolph or Gasol got in foul trouble - first "big" off the bench. I think the only reason they did the trade was to get another legit Center in Koufos.

Im excited for him. I hope he does well enough to make an all star type stamp on the league. We all know he is that good, and he's got a big heart. Kid deserves it.

I am just trying to figure out how the Kings are going to get next years #1 pick .... Did I hear someone say Dream Team?

Ben could be the face of the Kings for years...

When can I buy his new jersey? Really amazing life this kid has lived to date. Hope he continues to keep that winning smile and stay humble.

I feel sorry for Ben that he has to live in Sacramento.

Never been to California, but what's your reason? I'd rather he be there in a relatively sleepy town where he may be able to keep his focus better, kind of like Durant in OKCity. He's going to have to keep his head on straight to succeed in this league and for the rest of his life as well, so I think Sacramento just might be a good place to start out.

worked for Chris Webber too. He did NOT thrive in Washington D.C. early on in his NBA career, but REALLY turned it around in Sac-town!!

What’s wrong with Sacramento? It’s nice enough by itself, but you are an hour and a half from one of the greatest cities in the world, San Francisco, and from Lake Tahoe. You realize what kind of fun Ben is going to have with all that money in S.F. and Tahoe next summer?

Plus he can get twice the house for half the price of a bigger town. I’m ecstatic for Ben in Sacramento!

I hope the Kings don't discard Ben as quickly as Thomas. Give the kid a chance he'll be a stud.

Did you read the article? The new owner is IN LOVE with Ben. The Maloofs are the doofs who drafted and shipped TRob. They made horrible decisions in the last decade for the Kings.

I truly believe they think Ben is the cornerstone of the new Kings.

I can't wait to see how BMac performs in the NBA. I think that he's going to be just fine!

The top picture on this page give a strange angle. It looks like he has a huge head and a tiny body.

Never been to Sac town but I like Cali as a general rule.

I also think that Boston or Charlotte could end up with the top pick next year.

Among bad teams that could have the No. 1 pick, I'd love to see him end up with the Suns. Or maybe he could go all "Vince Carter"-like in Toronto.

Raptors are getting better. The 12th pick the Thunder had this year was originally Toronto's pick before Toronto sent it to Houston for Kyle Lowry and Houston sent it to OKC in the Harden trade.

Sacto is like a Midwest city. People boat & fish on the American River. Kind of flat and easy to bike around. No palm trees like LA. Hot in the summer, not cold like SF. Surrounded by farmland. Lake Tahoe pretty close for skiing.

So Ben ended up choosing Blackstock as his agent and he sat at the draft table with Ben McLemore and Bill Self. Talk about something very uncomfortable.

I'd like to think that Ben did not do the choosing.

Ultimately it is Ben’s choice, no?

WIggens will be #1 pick next year undoubtedly...even if Charlotte wins the lotto....no one could pass up on that talent in their right mind.