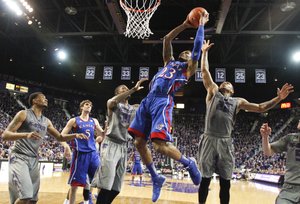 Images from Tuesday night's game against Kansas State in Manhattan.

KU coach Bill Self talks after win over KSU

Manhattan — The 30 three-pointers attempted were not a fluke.

It nearly worked in the Wildcats’ 59-55 loss to the Jayhawks.

“It’s something they give you,” KSU coach Bruce Weber said. “That is why Iowa State had a chance to beat them at their place. You’ve just got to hit the open (threes), then you’d make them defend you a little bit different. But we didn’t do that.”

Weber said his coaches have a saying: “Closer is not better. Open is better.”

The Wildcats — a 35-percent three-point shooting team coming in — made nine of 30 three-pointers (30 percent), getting 49 percent of their points from behind the arc. They also held Withey without a block for the first time this year.

“(Coaches) told us that they were going to be packed in, and they get not really lost on defense when you drive them, but they sink into the ball because they’re a great defensive team, and they’re so athletic that they swarm,” said KSU junior forward Shane Southwell, who hit five of 11 treys. “Out of our 30 three-point shots, I felt like 20 of them were open shots or shots that we usually make.”

KU coach Bill Self admitted afterward that his defensive strategy was to try to keep KSU out of the lane.

The Wildcats certainly noticed, countering by taking 53 percent of their field goals from three-point range (30 of 57).

“They weren’t coming out,” KSU sophomore guard Angel Rodriguez said. “I think pretty much their game plan was to just let us shoot threes. I feel like everybody was in the paint. I guess (we needed) to just make shots.”

This isn’t the first time opponents have tried to beat KU’s tough interior defense from the outside.

Coming into the game, according to Ken Pomeroy’s website, 34.5 percent of the points scored against KU’s defense had come from three-point range — the 11th-highest split nationally.

With its season-high 30 three-point attempts Tuesday, KSU put up 0.93 points per possession according to StatSheet.com, the fifth-highest total against KU’s defense this year.

Weber was asked about KU’s grind-it-out victories in the Big 12 following a dominant nonconference stretch.

“If you study basketball … to beat Belmont, Colorado and Richmond — those are good teams — and they were not just beating them, they were killing them, destroying them,” Weber said. “I think all of us in the league were like, ‘Oh my goodness.’ I think you guys and people around the state are like, ‘There’s no way you can compete with them.’

“I think they got into the league ... people scout. They know things that you can do to attack them. People take care of the basketball better. I think that’s a big key against them.”

I don't ever remember a year in which teams shot so many 3's against us. Must be the Withey effect. I wonder if we're leading the country in that stat.

This win may have sealed the conference for us. Two important road wins already: at Texas and at K-State. If we win at either ISU or OSU, then it's over.

It's early. As good as we are, even with this great start, doesn't mean there might not be a bump in the road up ahead. Yesterday didn't "seal" anything yet. I do like where we stand currently - and our defense is exceptional. Amazing how BMac has bought in on the defensive emphasis & made that part of his game.

After watching the OU-TX game Monday evening the remaining bump I fear as much as any is OU in Norman. I hope even with the game in Lawrence the Hawks do not celebrate too much prior to this Sat game. Kruger is developing, not unlike Self, a good compliment of transfers and freshmen to go with Osby and they are getting better with the experience every game. I hate to admit it but OU executed a lot better against the TX defense that we did the preceding game. It was like a throwback to when Kruger played at KSU. The executed well, do not miss free throws, do not turn the ball over and play a team game. In Norman they could be a tough out.

I'm not sure I like Coach throwing the dice and tempting teams to beat us from the outside. I've seen too many teams shoot way above seasonal averages to upset KU. So is he just playing the odds? Doesn't sound to strategic to me.

IF it is a game plan to start a game with, I hope KU can make defensive changes to counter how the game is actually flowing.

After watching KSU's guards...I was kind of hoping we could see similar perimeter defensive play from Johnson and Tharpe. Why not take your chances there and allow Jeff to protect the rim?

My favorite part of the game was when Shane Mouthwell was flapping his lips in KY's ear all the way down the court after he had made a basket.

I'm sure it was something like " I know you're going to kick our a$$ for the bazillionth time, but give me some props for that last basket ".

Haha, yeah, and Franshilla said there was some back-and-forth going on, but Kevin clearly never said a word to him.

nuleafjhawk, I wondered if anyone would 1) tell us exactly what Shane said or 2) take a shot (pardon the pun) at guessing. Until I hear different I taking your version.

I just read your handle, slowly without my ricochet rabbit learning disorder for the first time. Nice! I thought Kevin handled himself perfectly. I've had someone scream in my face like that and my reaction was less than adult. Like most of my reactions. Maybe Kevin went "Golden Child" on him, "wanna Tic-Tac I've got one right here, take the whole box".

I would think the Jayhawks would play better defense on the 3pt'ers knowing Whithey is in the lane. Oh well, great game great win.

I'm really looking for some insight on this one.

The guys are saying that KU's strategy not just tonight but all year has been to keep opposing teams out of the paint.

This certainly jives with the stats showing that teams shoot an inordinate amount of three pointers against KU.

But it's also strange because all year Self has railed on his team about how they are not guarding the three point line well though. And saying that the defense hasn't been good because they're allowing too many three point attempts.

Maybe it's Self trying to disguise the strategy in front of the media? Maybe what he really means is that he wants to force opponents off of the three point line and stop them short of the paint forcing two-point jumpers, or maybe he's getting at the team for not forcing enough turnovers and getting enough steals.

What is the deal?

ralster probably has a big part of it.

But there is another side of Self in which he is telegraphing disinformation.

Self railed about wanting EJ and Dir to play like Tyshawn for a bunch of games, but then the game would come and neither player would do it. Inference: Self was broadcasting disinformation. He wanted opposing coaches thinking his PGs' were going to penetrate, when they never were.

Self apparently does this about all kinds of things.

Self says they have to get a 4 that can make the 18-20 foot defense stretcher at the top of the key; then no one even takes the shot.

Self says they may have play KY and Travis at point, then he never seriously tries it.

Self is like a squid full of ink in the run up to games.

He'll say almost anything to give an opponent something else to prepare for.

Self apparently believes strongly in the value of disinformation.

We gain some space this weekend...KSU loses at ISU.

I really don't care for Bruce Weber. I get that he's widely known as a good person and a good coach. He just bugs me. It might be the 'funeral' he did when he took over at Illinois. I thought that was bad form, and perhaps I've had no reason to like him any more since then.

He reminds me of Lord Farquaad from "Shrek".

It's the way he talks that does it for me. Like, the sound of his voice.

I fail to see the logic for claiming our 3 point defense is so bad. With the exception of two blatant moving screens, TRel basicly shut McGrudder down. EJ and Tharpe shut out Spradling. Southwell went a little crazy mainly because KY is not used to guarding the 3-point line. Any way you look at it, the Hawks played pretty damn good defense all the way around.

“Out of our 30 three-point shots, I felt like 20 of them were open shots or shots that we usually make.”

Coming from a guy whose team only shoots 35% on the year. How does this make any sense at all?

Self's defense has always been susceptible to the three point shot due to its emphasis on dropping off to heip. Clearly an opponent has to knock down the shots. One cannot argue with the success of Self's help philosophy.

It's not that I disagree with Newell, that you can't control 3 pt makes, only 3 pt attempts. Or rather, makes are not attributable to team defense. But this KU team seems an outlier - is the fact that their opponents' 3 pt % is consistently low fool's gold?

What was Weber smokin' when he gave that interview?