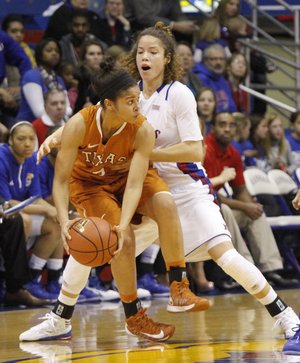 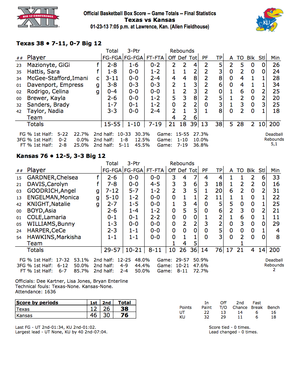 How did Texas get so bad???

It's karma. The evil that is DeLoss Dodds is catching up with the UT athletic department. Let's enjoy it while it last.

That, and no more Jody Conradt, if we're just talking women's basketball.

I hardly know what to say about this one. Obviously, the win is nice, but it's not clear as to just what it really says, either about us or Texas. But it's definitely not good for them.

When are the women's standings ever going to be updated?

It seems they've really cut back on the women's basketball page. I don't know, but they don't even have the roster listed anymore. I noticed that it hadn't been updated until well into the season, and now it's just gone. : (

I just remember not that long ago, the Lady 'horns were always Top 10.

Feel bad for UT that they seem to be falling apart at the seams, but on the other hand KU could have used the win any way they can. I was not impressed with all the number of turnovers while competing against an undermanned/less talented team. If they can do this against better teams then I will celebrate, until then I will reserve my celebration. It was good to see the other players getting some minutes like LC and MH.

Everyone's apparently forgotten Angel Goodrich! How can that be? Congratulations, Angel, on scoring 1,000 points and thanks for being tough and resilient to become a standout Jayhawk! RCJH!

TEXAS NOW A COMBINED 0-12 IN MENS AND WOMENS HOOPS!

KU must have fired Bonnie!