Notebook: Jeff Withey ties KU blocks record; Bill Self not panicking about being behind in league race

Kansas center Jeff Withey hits a wall as he tries to make a move against Oklahoma forward Romero Osby during the second half on Saturday, Feb. 9, 2013 at Noble Center in Norman, Oklahoma. 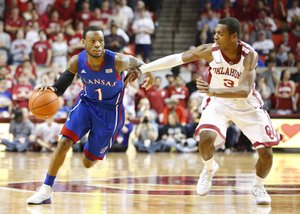 Images from Saturday's game against Oklahoma in Norman, Oklahoma.

KU coach Bill Self talks after loss to Oklahoma

Withey had one block in KU’s 72-66 loss to Oklahoma on Saturday in Noble Center, moving into a tie with Greg Ostertag as No. 1 human eraser in school history. Ostertag and Withey have 258 blocks; Aldrich 253.

The record-tying block came off a driving layup try by Andrew Fitzgerald at the 19:13 mark of the second half.

“I am so proud to have played for such a great school and loyal fans. It is with great pride that I congratulate Jeff on breaking the all-time block record,” Aldrich of the Houston Rockets wrote in an e-mail to the Journal-World.

“Jeff is a great guy and has been working so hard improving his game every day. Past and present players always hope to fill their chair with someone they can continue to watch and be proud of. Jeff has made it easy for me to do that,” Aldrich added. “I am so proud of all that the current team has done this season and am excited to continue watching their successes. I know I can count on our fans to cheer them on along the way. Let's raise another banner in the fieldhouse!” added Aldrich, who played at KU from 2008 to ‘10.

“It’s a testament to his hard work, the coaching staff working with him, everything. I’ve met him a couple times coming back for games,” Chenowith, a 7-footer from Villa Park, Calif., said of San Diego native Withey. “I’ve always pulled for him, being a Southern California kid. We always kind of pull for each other.”

Like Ostertag and Scot Pollard, who have gushed about Withey’s defensive prowess in interviews with the Journal-World the past couple weeks during Withey’s pursuit of the record, Chenowith loves Withey’s form.

“Jeff does a great job of keeping the ball in play,” Chenowith said. “Sometimes if a little point guard is driving down the lane, you want to make the point and swat it out of bounds. For the most part, you are trying to get the ball back.

“Bill Walton, it’s kind of funny, always told me to try to block it to a teammate and get the ball. No. 1, it’s great to give your team the ball and No. 2, it’s good to pad your rebound stats. You get a block/ rebound,” Chenowith added, laughing.

“Guys in the NBA in a contract year, if anything happens to them they are taken care of. Musicians ... you put them in disability in the event something catastrophic happens and they can’t perform anymore. They are taken care of as well,” Chenowith explained of benefits of getting disability insurance. “It (job) is something good for me. I can stay in Southern California and do this forever. I won’t have to move around taking coaching jobs here and there.”

Back to the bottom line on Withey’s accomplishment. “I’m proud of him. I’m happy for him,” Chenowith said. “He’s worked very hard. There were doubts about him when he came over from Arizona. He proved all the doubters wrong, which is great. As far as breaking the record ... it shows progression in Kansas basketball. If guys continue to break records it shows things are not at a standstill. It’s good for Kansas basketball. I like to see records broken, personally.”

• Coach Bill Self is not panicking with KU a game behind KSU in the Big 12 standings.

“We’ve been behind a game in the league race going into the last seven-eight games of the season before,” Self said. “We were never quite as good as our record, but we are better than what we have played here this past week. Does it surprise me we are in a dogfight? Not at all. This talk people had that the whole deal is who is going to finish second? I never had that feeling at all. We are going to have to play our best ball to have a chance to win it. Every game is lose-able on the road especially when you have Baylor, Oklahoma State and Iowa State left.”

• Elijah Johnson was asked if KU relaxed as a team. “No,” he said. “I think we took a little more time off than we should have. They set it up some steps for us to step backward and we didn’t realize it. I don’t think we relaxed much but we definitely relaxed a little.

Stats, facts: Oklahoma announced a sold-out crowd of 13,490 and estimated an actual attendance at 10,503, the most for the Sooners since playing the Bedlam game (12,695) against Oklahoma State to open Big 12 play Jan. 12. ... Ben McLemore led Kansas in scoring for the 12th time with 15 points. It also marked the 22nd time in 23 games that McLemore has reached double figures in scoring. ...Elijah Johnson scored 10 points, his ninth game this season in double figures. ... Kevin Young returned to the starting lineup after coming off the bench for the first time against TCU. He grabbed an offensive rebound and scored KU’s first points on a put-back dunk in the first minute. Young had two put-back dunks in the first half and scored six points before running into foul trouble in the opening minutes of the second half. He finished the game with eight points before fouling out with 57 seconds left. ... Freshman Jamari Traylor was the first player off the bench for Kansas and scored a basket for the second consecutive game.

In addition to the 43-point game last night, Frankamp hit the game winner tonight during a 31 pt. effort. He is averaging 40.6 ppg in his last 3 games.

With that said, I want to get back to my argument that Conner will play significant minutes next year. He has amazing ball handling skills, and is a coach's son that wants nothing more than to make his name a legend at the University of Kansas. He will quickly learn to play defense at the D1 level, which will garner him a spot in the rotation.

Congratulations Jeff. Try to put that record out of reach by the end of the season!

I totally agree with you CaliHawk. Conner had 48 points Tuesday against East High, including 21 of 22 free throws. Talking about his practice routine, he sounds like a shooting coach.

The 31 points Saturday were due to fatigue - he didn't catch his second wind until the second half. He played 48 minutes Friday against Kapaun when he had 43. That's a tough kid. A point guard that can hit free throws and treys when he's tired will be hard to keep off the floor.

"Frankamp finished with 31 points, hitting 4 of 4 three-pointers in the fourth quarter. He also had four rebounds, a steal and four blocked shots in the game. ...Frankamp, who scored 122 points in three games this week..." 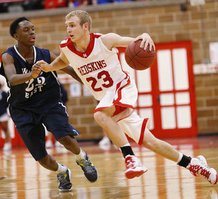 His defensive play, as you said, will be the key to how fast he enters Self's lineup.

Cali --- I have a feeling Frankamp will play huge minutes next year and I think he's going to wind up being one of our favorite Jayhawks off all time.

Withey isn't getting blocks anymore, and we can't blame it on teams deciding not to enter the paint anymore. It's obvious that teams have studied how to attack him in the paint to avoid the shot blocks. Also, I think he has lost a little shot blocking "mojo," as HCBS would say. The whole team has lost the fire, mojo, swagger. Whatever.

I counted 3 blocks during the game with a questionable 4th. Not sure how he only got credited for one. Sure looked to be like he passed the record yesterday.

It doesn't matter at all what these kids in high school. College is so very much different. How many times have we heard of a kid being all this and that and go to college and are mediocre. Yes, I will wait until this time next year to see what CF can do and not only him but all the rest of the recruits. Nothing like penning your hopes on fools gold. I'd think as adults all of you would simmer down and stop saying "next year, next year." We are in the here and now and things are spiraling downward. I have confidence Self knows what to do but will he? Time will tell.

I'm with you Keith. Since CF is a Kansas boy, I'm happy Self is giving him a chance with Kansas. However, he remains only 6'0" and will have a difficult/impossible mission covering the big elite guards. Additionally, after watching Ellis play, I'm more than suspect about the quality of Wichita HS bball.

Congrats to Jeff Withey for tying the official record. But it's incorrect to use phrases like "all-time" and "No. 1 in school history."

Wilt Chamberlain's 302 blocked shots at KU is the all-time record. Sure, he played before blocks were an official stat, but that doesn't mean they didn't happen. They were counted and recorded in old KU media guides and newspaper accounts. Even Bill Mayer wrote about Wilt's blocked shot record in recent years in the Journal-World.

Gary, you've been covering KU basketball for many years, you surely have heard of Wilt's 302 blocks. Why do you continue to completely ignore his accomplishment? Put an asterick beside the number, explain they are unofficial. But don't ignore Wilt and write Withey is the all-time, #1 shot blocker in school history.

and Wilt did that in 2 years.

And so has Jeff which makes comparing his record to Ostertag (4 yrs) and Aldrich (3 yrs) equally unfair.

Except there was no rule barring Withey from playing as a freshman. He lost a semester due to the transfer, but the lack of playing time was his own merit.

I hope he gets it. If he doesn't it will mean we've continued to play from behind. Rather than teams, learning how to attack him, it more likely has to do with teams having leads and not needing to take poor shots.

Rock Chalk!!! We love our Jayhawks!!!