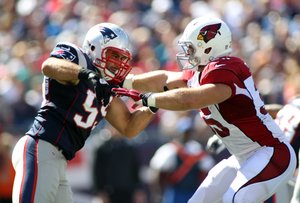 Rivera, a three-year starter and member of the 2007-2008 Orange Bowl championship team at KU, returns for a second stint with the Dolphins. He was signed by Miami in December 2010, staying until just before the start of the 2011 regular season.

Rivera played in two games with New England earlier this season, getting cut on Sept. 19. Rivera, a 6-foot-2, 255-pound native of Shawnee, signed as an undrafted free agent with the Chicago Bears in 2009 and spent time on the practice squads of the Tennessee Titans and Green Bay Packers before coming to Miami.

The Dolphins also resigned safety Jonathan Amaya, who spent 2011 with New Orleans after playing for Miami as a rookie in 2010. The team waived tackle Ray Feinga and safety Troy Nolan to make room on the roster.

Sorry... Just had to remind myself that my fan-hood and heartbreak with the Jayhawks can be worth it. Cheers to better times in the past AND the future.

Mike Rivera was a true student athlete. I remember I had a class with him and he wasn't the typical uninterested athlete (cough Brandon Rush cough). He was a contributor every day and showed that he could not only anchor an awesome defense, but also TRULY earn a college degree. Hope he finds his fit!

You always here stories in the NFl about guys who just keep sawin' wood, and eventually break through in the right place at the right time. (Andre Brown)

Unfortunately, he has already been released....