Seniors give thanks to fans 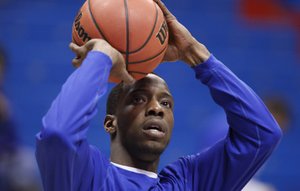 The senior speeches followed a pair of videos — one recognizing the Jayhawks for their eighth-straight Big 12 regular-season title and the second a highlight film of the three seniors.

Coach Bill Self served as emcee, telling the fans, “They say a team is only as good as your seniors. I guess we’ve had pretty damn good seniors for eight years straight.”

Juenemann, 6-foot-3 out of Hays High, began the proceedings with an eight-minute speech.

He opened by citing a Bible verse, indicating he wanted to “give all the glory and honor to God my sustainer.”

He thanked a batch of family members, including his dad, Jerry, for telling him at an early age: “It’s nice to be important, but more important to be nice.”

Juenemann, who broke down and cried early on in his speech, had a lighter moment in revealing that one of his cousins was responsible for his nickname, “Flash.”

He thanked KU All-American Wayne Simien for working out with him prior to tryouts his freshman year: “We ran laps, stairs. He said, ‘Do you really want to run out of the tunnel? A lot of people want to do that. You know what you’ve got to do. Work toward it.’’’

Juenemann made the team in tryouts his freshman year.

Teahan, 6-6 out of Kansas City (Mo.) Rockhurst High, was second in line to speak. His talk lasted 13 minutes.

He thanked trainer Andrea Hudy. “She transformed a slow white guy to not-a-slow white guy, I guess,” he said to laughter. “Some still say I’m slow. She gave me some six-pack, I guess.”

He recognized Self, indicating: “At times I’ve been frustrated at KU with playing time or whatnot. I’d not play for any other coach, ever. He is the best coach, not only for what he teaches on the court. He teaches you be a man ... to face adversity, qualities important in life. I respect that man as much as anybody.”

Teahan broke down and cried when speaking about his older brother/role model, Kyle, as well as his dad, Mark.

Taylor, 6-3, out of Hoboken, N.J., was the last to speak, following Self’s introduction of Thomas Robinson to the fans. Taylor spoke for six minutes.

“I’ve had people ask me, ‘Can anybody speak besides seniors?’ It’s not Junior Night, but before we leave out of here ... you’ve all been blessed to watch a kid grow up before your eyes. A kid who has a legitimate chance to be national player of the year that has sacrificed so much for the good of all of us,” Self told the fans, referring to Robinson.

Robinson received a standing ovation and waved to the crowd but did not speak.

“If you want to speak,” Self said to Robinson, “you could stick around another year.”

Taylor wiped away tears when thanking his mom, Jeanell, for her support.

“I can’t explain how much you mean to me ... I think of you all the time … being at Kansas the last three years (with her living here) and making this home, being with me with all my ups and downs. I love you.”

He thanked the fans: “I’ve grown up here as a man. You’ve seen me at my worst and at my best. I appreciate you all for sticking with me,” Taylor said.

Flower shower: Juenemann, Teahan and Taylor were introduced with family members amid a flower shower before the game.

The three hugged Self before walking to center court, where they received framed jerseys.

Self gave Taylor a slap to the face after the hug.

None of the players broke down emotionally or needed to wipe away tears during the ceremony.

What an anthem: Jim Cornelison of Chicago Blackhawks fame sang the national anthem. He’s a former opera singer who has worked full time for the NHL team for the past four years.

“I heard there’s great tradition and it gets crazy in there,” Cornelison said of the fieldhouse while chatting with reporters prior to the game.

His rendition was stirring, though some students did continue their puzzling habit of singing “Home of the Chiefs” and performing the tomahawk gesture at the conclusion of the anthem.

This ‘n’ that: KU students chanted “One more year” at Robinson as he exited the game in the final seconds. Though Self in his postgame chat with his media said, “Thomas in his last game, played well,” he later indicated there was no official word on Robinson heading to the pros after this, his junior season. “Nobody should get their hopes up, though,” Self said with a smile. ... KU will next Texas A&M or Oklahoma at 2 p.m. Thursday in a Big 12 tournament quarterfinal on Thursday at Sprint Center in Kansas City, Mo.

Big props to everyone involved for such a great regular season. Continue to roll, please. Rock chalk.

Winning is the key metric in sports.

Bill Self is a champion and a stud. A man of humility, integrity, incredible drive and competitive tension, of self control and a man who is accountable.

He just turned 3 more, er 4 more into the world. And, there is no doubt, they are better for it.

You learned from one of the best, gentlemen.

Best of luck to each of you.

Remember, every choice you make from hear on out, reflects on your good name, but also on his. Make him proud.

and please, don't take spelling lessons from me.

This whole crap about the students doing the tomahawk chop and singing "Home of the Chiefs" is getting nerve racking.

We have a great, great student section but this stupid habit of the chiefs stuff is just disgusting and very disrespective of the team and Coach Self. He has specifically asked them to stop but yet they do it. Grow up kids.

I am beyond disappointed that this happened after they were asked not to. They don't belong in AFH and anyone doing it should be removed permanently. I don't like to resort to name calling on this board because its mostly harmless opinions. However, these kids are disrespectful idiots who don't deserve to be in AFH. Kids, its not funny or cool. No one likes and you look like fools.

I was at the game; in the student section, and I didn't hear more than one or two people say chiefs. I'm surprised they put it in the article to be honest.

At this point it's really a non-issue, as far as it only being a hand-full of people saying it, who apparently haven't gotten the memo yet.

Of all the things the students could possibly be doing, don't you think yelling home of the chiefs is pretty harmless by comparison?

As for being an affront to your jingoism, they're not burning the flag, they're just playing around with the words in a song that has been drilled into their skull at every major sporting event they've attended since birth.

Do you listen to the National Anthem on repeat in your free time? Can you just not get enough of it?

Do you write to your congressman requesting death by dismemberment every time a celebrity butchers the words?

I think it's great!

Well done, gentlemen. I'm proud of you. Now best of luck in the upcoming tournaments.

Would somebody please throat punch these moronic fans who keep doing the ridiculous home of the chiefs gag? The Chiefs are from Missouri, not Lawrence and are an NFL team. Besides, it's tacky, even for people at Arrowhead.

any video links to the speeches?

They are included above next to the story.