End all, be all: Versatile Toben Opurum settling in 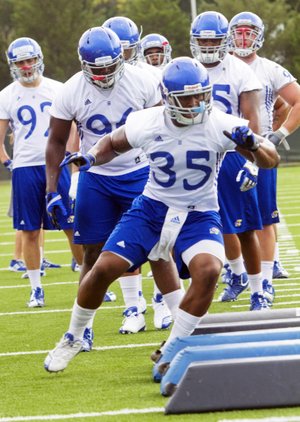 From promising running back to adaptable defensive end and several stops in between, Kansas University senior Toben Opurum has done plenty during his first three years in a KU uniform.

But as the co-captain prepares for his final season with the Jayhawks, the one thing many fans are dying to know is exactly what position Opurum will play.

“You have a strong-side end and a weak-side end, and Toben is a rush end (weak-side),” Weis said. “But if you teams try to mismatch you and get bigger on you, then Toben would slide out to (Sam) linebacker, and we’d put another defensive end on the field so you didn’t have a position where a 245-pound guy was your defensive end and 300-pound tackles were blocking him, and they’re running at you on every play. ... If you’re small, that’s what teams could do. They’d just line up and bring up the big boys and just pound away. So you need to have a plan in place in case they decide to do that.”

That plan, though not necessarily centered around Opurum, would not be easy to execute if not for Opurum’s intelligence, Campo said. While some teams are forced to shuffle new personnel on and off the field to adjust to changing offenses, the Jayhawks at times will simply be able to ask Opurum to step up or drop back on the fly.

“More than my mind, I have to change my mind-set,” Opurum said. “It has to change a lot because, playing defensive end, my first step is forward. But when you’re playing linebacker, your first step depends on what everybody else does. So it’s a different mind-set.”

Campo believes Opurum’s mind is as important as his 6-foot-1, 250-pound frame.

“He’s a smart guy,” Campo said. “And I think with the confidence level of the team picking him as captain, I think that helps. So you’ve got a lot of things that are positive. I’m more impressed with him now, after seeing what he did in the offseason, than I was even before. And I think he’s just gonna go forward.”

Opurum admitted that moving forward had not always been easy for him at KU.

“It’s tough,” he said. “You get to the point where you’re finally comfortable doing this, and then they say they want to see how you look doing this. It gets a bit frustrating at times, but once you finally learn it, you’re glad you did it, and you realize you can help your team the best because they have different positions they can put you in.”

When Opurum arrived at KU, he was a running back in mind, body and spirit. Today, after undergoing a couple of physical transformations and multiple position changes, the native Texan said he’s much more concerned with winning than worrying about what position fits him best.

“At this point, I don’t even know any more,” he said. “If they ask me to go do something, I go do it, whether it’s running back, linebacker, defensive end, left tackle on punt.”

Opurum has played all of those positions during his first three years as a Jayhawk, with injuries and opportunities popping up with regularity.

While his performance at each spot has made him one of the best-known names on the KU roster, Opurum said he hoped his final season would make him remembered.

“It’s definitely been a different experience than I was expecting to have,” he said. “At this point, I figured I would still be on the offensive side of the ball, getting ready to enter the draft as a running back. Obviously, after I hurt my leg it just changed everything around. But I’m a firm believer that everything happens for a reason, and this has happened to me because something special is supposed to happen to me my senior year.”

I can't wait to see what kind of season TO and the rest of the team has!

My fav player on the team since he arrived... I kinda miss him as a RB but he is tearin' it up on D. Gotta sympathize with him a bit, he's on his third coach of his college career.

hawkinator, i feel the same way. i saw a preseason interview with him before his frosh campaign began, and his apparent confidence, smarts, and wisdom won me over instantly. i was sure the kid was going to be a star. he still is in his own way, but after what he's endured, i don't think he's going to end up getting what he truly deserves after sticking with this program and honoring his commitment to it. it's kids like him that make those 'character counts' words actually mean something to me.

How did Perkins sabotage the team when they were 5-0? You lost me there.

I agree. What was Perkins' role? Personally I think Mangino should have left TO in at RB that year and moved Sharp to the slot. Sharp wasn't nearly as effective upon his return from the injury. Defense was horrible that year. After Colorado, it was all downhill. What a bummer season that was.

Simple. Perkins held a players-only meeting (w/o Mangino) just prior to the Colorado game. The season went downhill from there because (as anyone familiar with organizational management issues would know) Perkins had seriously undercut Mangino's authority.

A players only meeting held by the AD is a substitute for actually knowing what to do. It was a terrible move. It communicated to players and coaches alike a lack of confidence in the staff. You are right on, 741hawk. Zenger is a lot more subtle so I don't see that ever happening again.

Truth is, we hit the hard part of our schedule and because of poor recruiting after the Orange Bowl season we just didn't have the horses to compete, and Todd was clearly not healthy either.

It was an obvious distraction when Perkins came out and handled that investigation the way he did.

Many folks know...and perhaps some don't know...is that Perkins wanted Mangino out a long time prior to his "resigning". The 2007 season and winning the Orange Bowl put a big damper on Perkin's plans.

So yeah - I agree with Crimsonand blue...that Perkins knew handling matters the way he did really screwed up the focus of the whole program...players and coaches.

I'm sure that didn't help general morale, but it seems to me the biggest problem was that Mangino had built his entire game plan around Todd, and when he got hurt and couldn't keep up his end, everything fell apart.

Not buying the players only meeting as the reason why the team lost their last 7 that year. That team was flawed from the beginning of the season and very easily could've gone 3-9 that year. KU's defense was terrible that year, they couldn't run the ball to save their lives, and Reesing was playing with an injured groin for most of the season. That groin injury happened during the Colorado game and Reesing wasn't the same player after that injury because he lost most of his lateral mobility. The combination of those 3 facts played a much larger role in KU dropping the final 7 games than the players only meeting did that year.

I still think KU should have kept Toben as a running back.

Over the RBs we have now?

I've always thought the same thing. As a frosh, Toben looked great in the backfield. For Gill to say that Toben wasn't showing enough was pretty short-sighted. I think our O line hadn't developed enough to allow any of our RB's to get significant yardage the past couple of years. Plus, our passing game didn't do anything to stretch the field and open up our running game (and vice versa). I guess we'll never know.

A great year, stays healthy, the versatility, the coaching he has received, our "TO" might find himself playing somewhere next year on Sunday afternoons. He would be a great special teams player at the next level as a door through which to break in. The different coaching staffs, the changes, transitions, different positions...in the end this may all pay off for TO. They love versatility at the next level. To be a pure specialist limits your options. Have a great year. You deserve it.

From the picture, it looks like the guys are in good shape. To me, though, they look undersized to be going against the 300 pound guys on other teams.

As a former DLinemen, I can tell year that a DLinemen will be smaller than an OLinemen 9 times out 10 and you have to use the advantages that come with being smaller to be an effective player. Now what are those advantages? Well, when you're smaller than someone, odds are you're also quicker and more agile than the bigger person. If you let the OLinemen get his hands on you, he will do as he pleases with you. That's why you see DLinemen always moving their hands around to prevent the OLinemen from getting a good grip on them. That's where the chess match in the trenches. Can the bigger, stronger OLinemen get his hands on the DLinemen to keep him from doing his job or can the smaller, quicker, DLinemen keep the OLinemen from grabbing him and preventing the DLinemen from plugging the holes and filtering the RB to the LB's to make the tackle or make the tackle themselves if the RB can't find the open hole in the OLine.

Jayhawkintexas - we will soon find out that ur assumptions about the d-line are correct.

I could still see him playing a utility fullback role in the NFL.

I have thought that for a few years now the biggest problem with our defense was that the players were tentative in two ways. 1) They were too afraid of making a mistake so they were slower to pull the trigger on what they know they needed to do. 2) Because of all the changes in coaches, players shifting all around to new positions that they were behind the learning curve which further added to their hesitation.

If there is anything I would like to see it would be recognition of the assignment and quick to close with reckless abandon. I especially believe our LBs will be a lot more effective this year.

Please don't call him TO. There is already one of those and he's a tool. Is it really that much harder to say Toben?