As the Jayhawks move toward the end of the second week of fall camp, the only thing settled about Kansas University’s back-up quarterback competition is that playing the position can be unsettling. 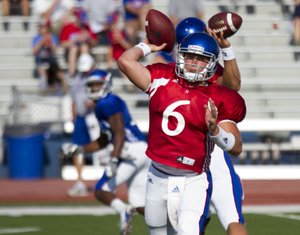 Kansas quarterback Turner Baty looks to the sideline to make a pass during a drill at the Fan Appreciation Day open practice Saturday, Aug. 11, 2012, at Memorial Stadium. 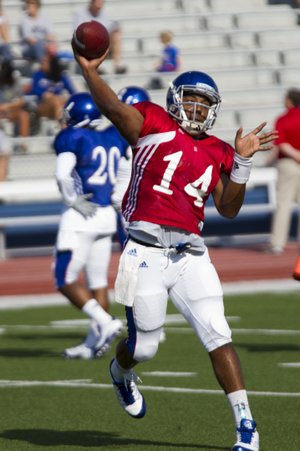 As sophomore Turner Baty and red-shirt freshman Michael Cummings vie to become the guy behind starter Dayne Crist, both have figured out it’s going to take a lot of work to win the job. That’s mentally and physically, as the Charlie Weis offense puts severe strain on both areas.

“There’s a lot of communication,” said quarterbacks coach Ron Powlus, who praised both guys for their work ethic. “A lot of things get identified at the line of scrimmage, so there’s a lot of nuances that they have to see and make decisions on quickly for us to have a successful play. So they’re not in a situation where they just call a play and walk up and run it. There’s a lot of thinking that has to go on every second.”

Student manager and head coach’s son, Charlie Weis Jr., who knows the offense as well as anybody on the KU roster, recently provided a glimpse into just how much there is to keep straight.

And that’s just one play.

Weis said Monday that if he had to play a game today, Cummings would be KU’s No. 2 quarterback. Seconds later, he emphasized that Baty and Cummings were in an ongoing competition and it seems likely that a winner will not be named for a couple more weeks.

According to both Baty and Cummings, the best part about the competition to be No. 2 is the teamwork that has gone into it. Unlike some competitions, where tempers can run hot and intensity can take over, the battle behind Crist has been very friendly.

“Turner’s a cool guy,” Cummings said. “Of course there’s the competition between us, but, at the same time, we’re all on the same team, we’re in the quarterback room and we’re all working together to get better.”

Added Baty: “We all have a common goal. We all want to win. That’s the bottom line.”

Although Cummings was on campus last season, Powlus said he did not enter camp with any extra advantage on Baty, who transferred from City College of San Francisco.

“It’s a whole new system for both of those guys,” Powlus said. “Really, Dayne’s the only one that had any familiarity with our offensive system. Right now, they’re both learning and both working to get consistent and working hard at it.”

Powlus did not indicate any time frame for making a decision, only that the coaches would continue to push both players throughout camp.

“Reps help and practice helps,” Powlus said. “The experience of it all helps. But you have to be knowledgeable and once you’re knowledgeable, then you can be confident. That’s what we’re trying to get those guys to.”

As long as Crist is upright and healthy, I think KU can be competitive. If he goes down, the inexperience of these two guys will show and KU will suffer.

Looks like we are in decent shape at the QB position for years to come. Aside from Reesings sophomore year, when was the last time we could say that? Obviously things tend to happen, people get hurt, players don't pan out, and so on. That said, our most important position looks to be filled by a big, athletic kid for the foreseeable future with guys we have on the team or guys who have committed.

I like the thinking. I'd even go so far as to put Darling/Cozarrt down for 2016 as well, as I would expect redshirt seasons out of them their first year on campus.

One other note: Baty is a sophomore this year, so he won't be around in '15.

If he red-shirts this season, though, he would/could be here in 2015.

Not saying that's what will happen, but if Crist stays healthy I think there's a good shot that Baty will save the eligibility. A lot of that depends on Cummings, too. Time will tell.

Watch out for Baty battling Heaps next year for the starter, he won state in HS and National Champ at Juco, has to be a winner. Heaps is good no doubt and will probably get the nod but watching Baty's videos and his wins he may give Heaps a battle.

Agree and hope there is a good competition. At this point in time, it looks like Heaps job to lose.

As an aside . . . if the color reproduction in the photos is accurate, and the game jerseys are like these practice jerseys, it looks like we're going back to the "crimson" shade of red, instead of that orange-ish shade. Not important, but I like it.

Let's hope we never have to know who won this competition. This year or the next two.

From what I've read on this website, Heaps is much better technically than Crist (and it isn't even close). I've heard he has better release, touch, accuracy and arm. I haven't even touched on his legs.

I think if you talk to most BYU personnel, he struggled with the leadership as a freshman, which can be overlooked if you are winning; however, if he is able to glean the leadership skills from Crist, and the execution he already has, I like our chances.

I just hope that our no. 2 gets some quality reps early on and at every chance. Keeps our no. 1 safe and healthy and bodes well for the future.

Jordan was named the starter for Colorado, I wish him the best of luck for the Buffs!