Boston's Raef LaFrentz shoots over Houston's Derek Anderson (8) during the first quarter. The Celtics won, 102-82, Sunday in Boston as LaFrentz tied his career high in points and went 7-for-9 from three-point range.

“To be considered for the Kansas Sports Hall of Fame is a great honor,” LaFrentz said. “There is a long list of athletes from all sports that achieved at very high levels, and to be added to it is very humbling. It always feels good to be recognized for the work done during competition.” 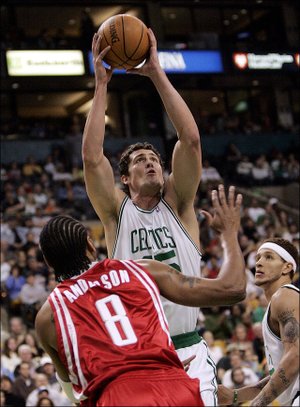 Lefty sharpshooter LaFrentz averaged 15.8 points off 55.5 percent shooting and grabbed 9.1 rebounds per contest while helping KU to a 123-17 record in his four-year career.

“I think Raef is the most prolific low-post scorer we’ve had at Kansas in the last 30 years,” said former KU guard Ryan Robertson, a teammate of LaFrentz at KU. “When Raef would post down on the block and do one of those fadeaway jumpers, it was as close to a guaranteed basket as there is in basketball. It was one of the most unstoppable moves we’ve seen at Kansas.

“What made Raef so tough,” Robertson added, “was not only his ability to score with his back to the basket, but that face-up jumper he developed as he got older and more mature. He was a very, very rare talent because of his height and skill. When you are an athletic 6-11 guy who can shoot it, you will end up being a lottery pick, and that’s what he was.”

LaFrentz was taken third overall by Denver in the 1998 NBA Draft.

He played 11 seasons with the Nuggets, Dallas Mavericks, Boston Celtics and Portland Trailblazers. He had career averages of 10.1 points and 6.1 rebounds per game.

“Raef was a great teammate,” Robertson said. “He wanted the ball at crucial times. Everyone respected him for that. Whoever does the rankings ... he has to go down as one of the all-time great Kansas basketball players.”

LaFrentz, 35, who has been retired from the NBA for three years, lives in Iowa with wife, Joie, and sons Cael and Rex.

“I spent many years traveling playing basketball. Raising my sons takes up most of my time, and I wouldn’t want it any other way. We waited until my career was close to an end to start a family for that reason,” LaFrentz said.

Frederick, who played hoops at KU in 1960-61, served as KU athletic director from 1987-2001. During his tenure, KU teams won 32 conference championships and produced 41 Academic All-Americans. He served on the NCAA basketball tournament’s selection committee from 1992-96 and was the chair in 1995 and ’96.

The Senior Scholar Athlete Award at KU is named in his honor. In 2010, the NCAA created the NCAA Bob Frederick Sportsmanship Award, which honors an NCAA administrator who shows the highest respect for intercollegiate athletics. 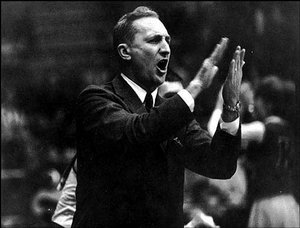 Harp compiled a 121-82 record as head basketball coach at KU from 1956-64. His Wilt Chamberlain-led 1957 team lost to North Carolina in triple overtime in the national championship game. The 1960 Jayhawks won the league title but lost to Cincinnati in the Midwest Regional. Harp was an assistant coach under Phog Allen from 1948-56 and a starting guard on KU’s 1940 team that placed second in the NCAA Tournament. He later served as an assistant coach under Dean Smith at North Carolina from 1986-89.

— Harold Bechard, formerly of the Kansas Sports Hall of Fame, contributed to this report.

Anyone know whether Raef was at the Legends game?

No he was not, unfortunately. Maybe we'll see him next time.

Heard he was golfing at Alvamar with Kirk smoking cigars for the celebration of his newborn child. And shot even par with Kirk at -3 under. LOL JK Not sure though.

He did not attend.

Raef perhaps feels torn between Roy and KU in a way that Paul Pierce and Scott Pollard do not.

Perhaps Raef and Bill did not get off on a good foot the way Self has managed to do with many of Roy's other players.

Or perhaps Raef's kids had an event.

I would opt for my kid's event, if I had to choose.

But if I had to choose between Roy and KU, well, show me to Naismith Court and then to the Wheel for a beer afterwards. And I would save a great big outpouring of love for Roy for when he finally pays KU the recruiting curtesy he paid UNC, or retires.

Can't get em all...let's hope though they do thiat event again soon!

Jacque is an assistant coach for the Spurs. I believe labor issues prevented him from participating with locked out NBA players.

Raef is one of the best hawks of all time...injuries plagued him in the pros but at least he made serious money and seems to be a huge landowner in Iowa now...Good for him.

~Raef was a quiet big man, who got it done. Ryan Robertson nailed him perfectly above. Automatic from the block and a face up trinitizer standing 6'11" that could transition in a running game. Lottery LaFrentz. I agree with Ryan that I among many have been remiss in giving him as much credit as he deserves. If he had played for Bill Self, Self probably would have played through him way more than Roy did. Bill played through Wayne Simeon, when he had the chance. Bill would literally have lived and breathed through Raef had he had him. There are some big men that it just does not make sense not to play through. I always believed Roy should have given Raef at least another 5 shots per game and three of them should have been step outs from trifectaville. Raef was value based currency, not Fed debt notes. That's why there aren't endless printings of him. He was the real thing. He was just Tim Duncan quiet. There was one Tim Duncan. There was one Raef. For awhile, it seemed there were going to be a lot of big men that could do it all. And then there weren't. For awhile it seemed there was going to be a steady run of Wilts and Bills, and then there weren't. Then it was Waltons and Akeems. Then there wasn't. Now college basketball is in an extended drought of bigs that are money. Kevin Love turned out to be an anomaly.

~Could Kaleb T be the next quiet money big? Hope so. Hope the House of Great Centers aka KU gets him rather than "I was recruited by Cal to Pitt, I was a grad assistant for Stu Jackson at Mad Town, assisted Slick Rick's alter ego Ralph Willard at Pitt, and was polished by Herbie Sendek and Thad Matta" Miller. What a waste, if Kaleb chooses Miller over Self and Manning. What a waste. Wilt, if you are up there. Make an in-home visit to Kaleb, kind of like Harold the angel in Frank Capra's "Its a Wonderful Life" with Jimmy Stewart. Take Kaleb for a walk through his future life as a center and show him what it will be like if he were not to choose KU. Show him how many times he will get eaten and beaten, if he does not learn his trade from Danny and Bill. Show him how far a jump hook can take a big that can transition and face up, too. Show him what life would be like without getting Hudy-ized. He'll listen to ya, Wilt.

~Ryan Robertson has convinced me that he should become KU's Jay Bilas. Jay left the law for broadcasting basketball. Ryan should consider doing the same, or at least part time. He has an impish face suited to dishing wit, which he has in surplus. We need a face of KU basketball on the Eastern Sports Partiality Network (ESPN), but probably can't get one due to ESPN's demographic biases. So as good Kansans have been doing since the time of the Populists and James Naismith, when Kansans just created their own politics and game that eventually swept the nation, and just as Phog Allen largely developed the profession of basketball coaching to improve the game, and the national tournament to remove the media bias from selecting champions, we now need to come up with our own broadcast format able to exploit ESPN's heavy bias. We need to create a National Basketball Nework that specializes in basketball.

~ESPN is basically a sports conglomerate lacking sufficient specialization. It is trying to do too many sports and so is not doing any of them justice. ESPN is not a conspiracy against KU, so much as a General Motors against KU. The ESPN business model is not based on quality and reliability and user friendliness. It is based on high volume, value-engineered broadcasting, which are auto industry terms that when relied on for several decades lead to the eventual bankruptcy of GM.

~ESPN is vulnerable to an internet-premised competitor. A basketball media outlet based on an internet model, not a cable/network model. The cable/network news business is inexorably being withered on the vine by internet news outlets. Something analogous can happen in sports.

~The National Basketball Net can be a start-up that provides exactly what ESPN's slavish devotion to east coast eye balls cannot. It can, for example:

-provide a basketball talk show in which each talking head represents a different region of the country.

-provide another show perhaps called White Collar Hoops that could focus on the programs that are always pretty good, but a step down from the Bluebloods.

-provide a program called Midmajor Giant Killers that could talk about the Mid Major teams and analyze who is doing what and how, and how the Mid Majors will attack the Madness.

Each program is a feed that can be watched any time 24/7 and as often as one wants.

The talking heads used would be locals from schools in each classification.

~The National Basketball Net (NBN) talking heads would also link up for games carried on ESPN/CBS and would "simul-commentate" in an NBN window, while computer viewers are watching the game in another window, or watching the game on TV with the sound off, while watching and listening to NBN on their iPad.

~"National Basketball Net-Bringing the People's Game Back to the People"

You read it here first.

If I recall correctly, some on this board have said that Dick Harp invented pressure defense. If this can be confirmed, then it should be added to and placed at the top of his list of accomplishments.

Harp's innovation of pressure defense, along with Hank Luisetti's innovation of the jump shot (developed under former KUer John Bunn at Stanford) probably ranks as the two most influential innovations that lead to the contemporary game.

Dick Harp was a great basketball mind, who was not quite such a great bench coach, or recruiter.

If he invented pressure defense, he needs to be recognized for it.

I heard that Raef hasn't returned to KU once since he left. What's up with that?

LJW headline editor - those men are Jayhawks, not ex-Jayhawks.