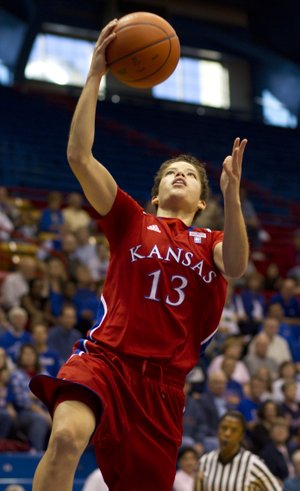 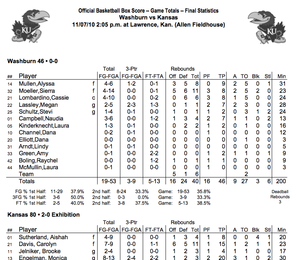 Kansas University women’s basketball coach Bonnie Henrickson sat at her postgame news conference following the Jayhawks’ 80-46 trouncing of Washburn on Sunday and was slightly apologetic about her voice — which she said had been under a bit of strain this past week.

A week’s worth of yelling about two things — defense and ball security — was the cause.

“For the last couple of days, you turn it over, you’re going to get subbed out,” Henrickson said. “And you can stand and watch somebody take care of the ball, because we’re going to have to.

“It’s a game of possessions. No sense giving it back to somebody.”

The Jayhawks held the Lady Blues to 35 percent shooting, forced 27 turnovers and committed only 13 in an exhibition game at Allen Fieldhouse, all pretty strong indicators they heard Henrickson’s message clearly.

“She was on us this week,” senior guard Marisha Brown said. “But I feel like it paid off today.”

The Lady Blues swarmed the Jayhawks early, pounding the ball inside on offense and defending well in the paint.

Once KU decided to match Washburn’s hard-nosed style, though, it was a pretty one-sided battle.

“I’m not a weak player,” junior forward Aishah Sutherland said. “I’m going to go out there and bump them back.

“I wanted to show them that I’m not going to back down just because you come out aggressive.”

KU’s defense in the second half was stifling.

“Defensively, in the second half, they were as good as we’re going to ever see this year,” Washburn coach Ron McHenry said. “I don’t care who we go and play.”

McHenry added that while the first half was respectable, the second half — in which Kansas forced 15 turnovers and held Washburn to 19 points — felt like a blur.

It sure looked like one, as red jerseys flew around the court, swiping passes and diving on the floor for loose balls.

It certainly helps that Henrickson has players who buy into the importance she places on the defensive end.

“It was really exciting,” Brown said. “I know that’s the one thing I can bring to the table if I don’t bring anything else.”

The Jayhawks, who shot 50 percent from the field, weren’t too shabby on offense, either.

Fellow sophomore Monica Engelman was more aggressive, scoring a team-high 20 points — including the first 10 KU points after halftime — on 8-of-13 shooting.

Freshman Keena Mays also stood out, looking comfortable running the offense when sophomore Angel Goodrich was on the bench.

The 5-foot-7 Mays only finished with three assists, but showed great speed in transition.

“She’s probably as good as anybody in the gym one-on-one,” Henrickson said.

Mays also used that quickness on defense, after being called out by Henrickson for her defensive effort last weekend.

“I think she’s accepted that challenge from her teammates to be better there,” Henrickson said.

Senior center Krysten Boogaard saw her first minutes of the season after missing the game against Fort Hays State because of patellar tendinitis in her knee. The 6-3 Boogaard played 16 minutes and scored two points with four rebounds, two blocks and one steal.

This is a fun team to watch. If you aren't coming to the games, you are really missing some good basketball.

Sadly, these girls could be playing for the National Championship and some people wouldn't care on this site.

True, despite claims to be a "basketball school"

This is a very young, and fun team to watch. I can see that the future will be bright for the Jayhawks. Balanced scoring is something that will take this team far. Good job Coach Bonnie and your staff! Rock Chalk Jayhawks !!!!

I think that Bonnie actually now finally has the players, and she has good ones comingi in. Unfortunately for her, expectations have gone up. If she meets those people are going to love her and the team,if she does not, well then there is going to be a new AD.

Two parts to communication, saying the right things, and having someone really listen and understand what they've heard. Bonnie's now got the players to use depth as discipline, this is what Bill Self has had for a long time. I am sure she will use it.

Can't get too excited about the exhibition season. I think the Free State girls would have given Washburn a run for the money. That said, I'm impressed with the overall athleticism of the team. Wisconsin will be the first real test as they are returning 4 starters from last years NCAA tourney qualifying team.

Yeah, slowplay, Washburn Women are ALWAYS good, and have been for quite some time. Not a very basketball-savvy comment. Watch them play most any team that's at their level, and you'll be watching some good basketball actually. You should go watch a game: it's close, and it's a pretty cheap ticket, and you can find pretty good seats. Better yet: we should ALL start going out and supporting OUR ladies in AFH.

She's a gamer. Sort of a Nick Collison for the women.