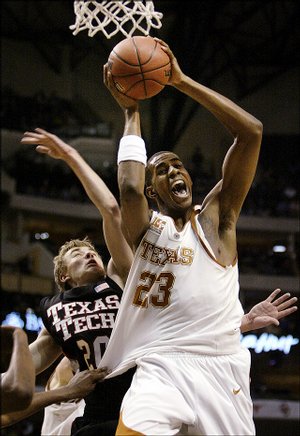 Playing in an NBA arena, Texas center LaMarcus Aldridge sure looked like he was in the right place.

From dunks to long jumpers, altered shots to broken-up passes, plus rebound after rebound, the 6-foot-10 sophomore was at his menacing best on both ends of the court Friday, carrying the No. 8 Longhorns past Texas Tech, 77-70, in the quarterfinals of the Big 12 Conference tournament and sealing Red Raiders coach Bob Knight's worst season in 35 years.

Aldridge finished with 20 points and 16 rebounds and left no doubt why he won the conference's first-ever defensive player-of-the-year award.

The Longhorns (26-5) just tied the school record for victories, a mark they can break today in a semifinal against Texas A&M.

The Red Raiders (15-17) appeared headed to their third lopsided loss to Texas this season, then rallied for a brief lead. They tied it with 8:29 left and were within four twice in the final minute but couldn't finish the rally, despite 28 points from Big 12 scoring leader Jarrius Jackson.

"The one thing I really enjoyed today was our press conference," Knight said while walking out of the room after no questions immediately were asked.

Dallas - Texas A&M enjoyed its first Friday game in the Big 12 tournament. Joseph Jones had 21 points and Josh Carter 15, including four of A&M's season-high 12 three-pointers, and the Aggies won in the Big 12 tournament for the first time. In what might have been an NCAA elimination game, Colorado (20-9) was only 18-of-60 shooting and was never in the game after jumping to a quick 9-2 lead.