Dallas — Letting teams stick around finally got the best of Oklahoma.

After the Sooners won five Big 12 Conference games by one point during a wild regular season, it was sixth-seeded Nebraska that stung third-seeded OU, pulling away late for a 69-63 victory in the league tournament quarterfinals Friday in the American Airlines Center.

"Tonight was sort of an ambush," OU coach Kelvin Sampson said. "I didn't see this coming."

Few did. But with the tournament's first seeded upset of the week, the Huskers will stroll into the semifinals and take on second-seeded Kansas University at 3:20 p.m. today.

"We're not satisfied yet," senior Jason Dourisseau said. "We've got another one (today) we've got to be ready for."

The Huskers (19-12) went back and forth with the Sooners (20-8) the entire second half, and it was - of all people - a pair of Nebraska freshmen who finally took over.

Marcus Walker, a Kansas City, Mo., native, and Jamel White scored Nebraska's final 13 points. The string started with OU up 55-54 and ended with Walker chest-bumping Herbie the Husker as he pranced off the court a winner. 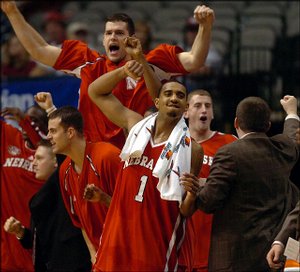 "That was huge. They grew up today," Dourisseau said of the two, who combined for 32 points and 10 rebounds. "This was a big game on a big stage, and they both stepped up when we needed them to."

Now, the stage gets even grander. Nebraska and Kansas will meet for the third time this year, and both times were crippling Nebraska letdowns. KU won the first meeting, 96-54, and the second, 69-48.

"The first game was a nightmare, and the second one was at least a bad dream," NU coach Barry Collier said. "They've had their way with us, and they've had a very good team. I had them all over my ballot for postseason honors. It's a tough, tough matchup."

Added Dourisseau: "They are a good team. They are young, but they are extremely talented, and we have another challenge ahead of us (today)."

Despite the quick turnaround into today's tilt, the Huskers spent a lot of time celebrating late Friday. The assistant coaches hugged each other with the seconds ticking down, the players sprinted to the locker room with newfound energy, and the fight song was bellowing down the hallway outside their door.

You never would've guessed two games still remained between the Huskers and the Big 12 tournament championship.

"On the night, I am just so proud of this team," Collier said, "because they want to keep playing."