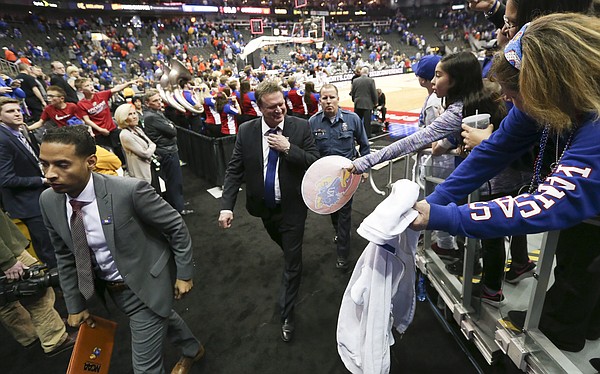 Kansas head coach Bill Self loosens his tie as he makes his way from the court following the Jayhawks' 82-68 win over Oklahoma State, Thursday, March 8, 2018 at Sprint Center in Kansas City, Mo. by Nick Krug

Add Kansas basketball coach Bill Self to the list of people in the area who are in full support of Kansas City, Mo., making a push to become the temporary home of the Toronto Raptors.

Self was asked on Friday about the Raptors’ potential need to relocate for the 2020-21 NBA season because of travel restrictions brought about by the COVID-19 pandemic, and he did not hesitate to offer his opinion about the move and Kansas City’s attractiveness as a pro town.

“There’s no question (that) having an NBA team play here, even if it’s only temporary, (would) put us in a position to show what we can do to attract a team," Self said. "Personally, I think it’s a must. We’ve got to go for the throat on that.”

While Self resides in Lawrence and has spent the past 18 years of his professional life there, Kansas City has always been a second home of sorts to the Kansas basketball program.

The Jayhawks routinely have played both regular season and postseason games at Kemper Arena and Sprint Center (now T-Mobile Center) and the support Self has seen and felt for his team during its time in Kansas City, Mo., has stuck with him.

“This place is obviously a hotbed for basketball,” Self said. “This place obviously loves their ball and we’ve shown that we love ball historically.”

Self said the T-Mobile Center set-up, along with the atmosphere of downtown Kansas City that surrounds it, would be reason enough for the Raptors "to seriously consider Kansas City.”

According to reports, Kansas City's mayor, along with other elected officials in the area, recently have been in contact with the NBA to express their interest in being involved if the need to relocate the Raptors arises.

Self likened the potential move, and what it could lead to, to what Oklahoma City experienced with the New Orleans Hornets when Hurricane Katrina forced the franchise to relocate from 2005-07.

The reception the Hornets received and the support they got from the state of Oklahoma paved the way for OKC to attract the Seattle Supersonics when that franchise decided to leave its longtime home in the northwest prior to the start of the 2008-09 season.

“I can see Kansas City doing the same thing,” Self said. “I think people would rally around it. … I think it would be an unbelievable move if the Raptors have to go somewhere.”

Head coach Bill Self speaks to media after Jayhawks are picked 2nd in Big 12 preseason poll by KUsports.com

FWIW, Hornets are Charlotte, N'awlins is ya Pelicans.

They were the New Orleans Hornets at the time of Katrina and when they moved to OKC temporarily... Moved to NOLA from Charlotte in 2002-03.

Aw, hell no! No NBA team in Kansas City! The NBA is beholden to Red China and is a hotbed for anti-American, anti-Trump sentiment. We don't need the NBA in the Heartland!