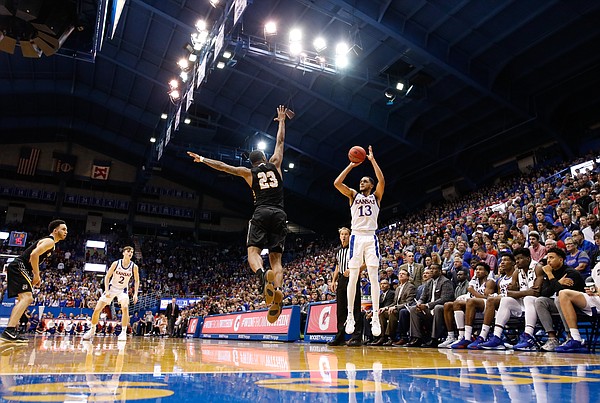 Kansas guard Tristan Enaruna (13) pulls up for a three over Fort Hays State guard Calvin Harrington (23) during the second half, Thursday, Oct. 24, 2019 at Allen Fieldhouse. by Nick Krug

Thrown into the mix a season ago as a true freshman, but only occasionally and rarely with any consistency, Tristan Enaruna appeared in 30 games for the 2019-20 Jayhawks.

The Jayhawks are hoping that that experience, though limited, was enough to springboard the 6-foot-8 sophomore into an impact season in 2020-21.

Whether that happens or not remains to be seen. And it certainly will not come easy if it does.

Enaruna is just one player in a loaded KU backcourt that features athleticism, shooting, defensive prowess, size and versatility.

The unique thing about the second-year player from the Netherlands is that he is one of the few Jayhawks who possesses all of those traits. The key now if figuring out how to utilize them to unlock his potential.

Enaruna led all scorers in the Jayhawks' recent Late Night in the Phog scrimmage, and his assertiveness that night opened a few eyes.

Here's a quick look at what else you can expect from Enaruna this season, as he tries to transition from spot usage to a significant role on the 2020-21 team.

He will: Catch your eye with his added size and strength

His height and weight on this year's roster are exactly the same as they were a year ago, but Enaruna's look has changed.

He appears to have bulked up and filled out a little more, adding lean muscle, particularly to his upper body.

While his size was never an issue for him a season ago, the new physique should bring with it plenty of confidence for a player who was already firmly on the radar of NBA scouts.

There's no telling what that could do for his game. But it should make him even better in the paint and could transform him into an even better defender, as well.

With his height and length, Enaruna has the potential to be terrific on the offensive glass. Being able to use his added strength should help keep him around the rim instead of allowing him to get bumped off of his spots.

Defensively, with his long arms already posing as a weapon, Enaruna could become tougher to attack if he's able to put more physicality into his defense on the ball.

He won’t: Have a bunch of 3-point shots drawn up for him, but he might take several anyway

This was exactly the way Enaruna scored six of his 10 points in the Late Night scrimmage and that could have been a little foreshadowing of what's to come.

Questions still linger about Enaruna's ability to play with fire and elevate himself beyond a casual approach, and, generally speaking, players who are a bit more passive tend to hang out around the 3-point line instead of finding a spot to attack in the middle of the floor.

With the playmakers the Jayhawks have on offense — Marcus Garrett, Bryce Thompson and Dajuan Harris to name just a few — if Enaruna continues to do that, he could be the recipient of a whole bunch of kick-out passes to the 3-point line.

Those shots, like they were at Late Night, would likely be wide-open, easy-rhythm shots and could help turn the career 26% 3-point shooter into a much more dangerous option from behind the arc.

During a recent meeting with the media, Kansas coach Bill Self said Enaruna had a chance to start.

“I don't know if that'll take place,” Self noted. “But I would anticipate at some point in time this year that he'll definitely be a starter for us.”

The thing Enaruna brings to the table as a potential starter is versatility. In addition to his length, ability to run the floor and potential to get on the glass on both ends of the floor, he has the make-up to play multiple positions, perhaps as many as three or four.

That makes him — and several others like him — a valuable option in the face of injuries or off nights by any of his teammates.

Remember those seasons when Self has claimed to really have six starters because his sixth man has played such a big and important role and could have been a starter?

This could be one of those seasons only instead of saying he has six starters, Self could say he has seven or eight.

If that's the case, Enaruna almost certainly will be one of them and he could be poised for a breakout season.

From what I saw last season, Enaruna's only problem was he seemed to lack confidence, he spent too much time thinking and worrying about making a mistake (and thus getting pulled). Bottom line is he was offered the scholarship because the coaches saw what he can do and saw what he can become. Now he just needs to listen to the coaches, and then just get out there and play. He has the talent. No question about that. I look forward to watching him grow as he learns to relax and just play. And enjoy himself doing it.

That’s 8 with starting potential plus a 5* freshman and another RSFreshman. Harris won’t have a lot of minutes behind Marcus, but might get some extra time alongside him. Bryce would certainly seem destined for significant minutes.