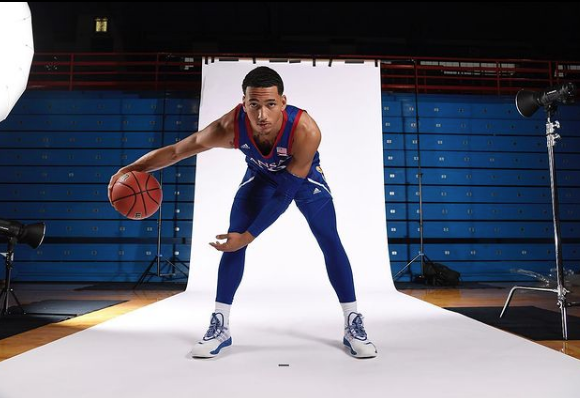 With a new 'do and rebuilt body, Kansas redshirt freshman Jalen Wilson is eyeing a breakout season in 2020-21. (Photo courtesy of Kansas Athletics) by Matt Tait

Away from the game he loves for longer than ever before, Kansas guard Jalen Wilson wasted no time getting back after it when the broken ankle that cost him the 2019-20 season healed.

And while rehabbing his leg and trusting the ankle again was a major focus for Wilson during the offseason, he also looked elsewhere to make sure that his time off would not set him back.

Specifically, he looked at rebuilding his body, inside and out and from head to toe.

“It was really just me, you know, nobody told me go home and lose weight,” Wilson said recently. “I went home and just reevaluated my season and what I needed to improve on and I figured that my weight and my body was you know going to be a main thing that I needed to work on to get to where I wanted to be.”

That destination is playing major minutes at Kansas and contributing to KU victories. And that work led to Wilson dropping 14 pounds of fat and returning to campus a much leaner version of the player who arrived.

In many ways, the 6-foot-7 redshirt freshman is unrecognizable. Gone are the endless rows of frizzy hair and his upper body looks narrower and his lower body stronger.

Even his face is thinner, the product, Wilson said, of emphasizing his diet as much as his workout routine.

“I just really took pride in what I ate during the summer,” Wilson said. “Being at home, things can really go south if you're just laying down all day. So I just ate right, worked out a lot and I still continue to do that now because I don't ever want to go back to how my body used to look like.”

Wilson said the new frame has helped him with “everything” on the basketball court.

“Speed, athleticism, I'm able to jump higher now and just faster on the court running,” he explained. “I don't think I had enough bounce last year, no explosiveness, so I'm definitely out of that.”

As a result, he's also right there in the hunt for major minutes and perhaps even a starting role for the Jayhawks this season.

Kansas coach Bill Self said recently that Wilson plays like a starter two days a week and has had “a tremendous fall.”

“I think Jalen's mindset is, 'I didn't like the way last year went, I didn't like sitting there and watching, I learned what I had to do to get better to put myself in a position to play,' and he's done it,” Self said. “You guys will be amazed at how he's changed his body and how much more explosive and everything he is this year so I'm very excited about him.”

Wilson's teammates have noticed, too.

“Jalen has been great,” KU freshman Bryce Thompson said. “Knockdown shooter, good slasher, he's bulked up a lot since last year and he's been very good in practice. I'm excited for him.”