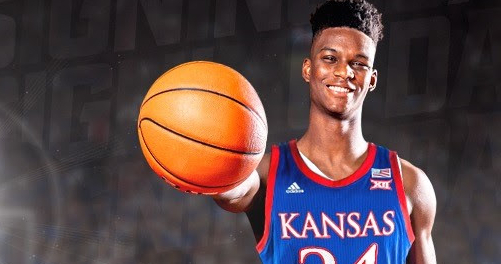 Class of 2021 Kansas basketball recruit KJ Adams made his commitment to KU official on Wednesday, Nov. 11, 2020, when he signed his national letter of intent to become a Jayhawk. (Photo courtesy of Kansas Athletics) by Matt Tait

Future Kansas Jayhawk KJ Adams waited until late evening Wednesday to make his commitment to the KU basketball program official by signing his national letter of intent at a ceremony in his hometown of Austin, Texas.

But waiting until the end of the first day of college basketball's early signing period, instead of signing bright and early like a lot of prospects do, did nothing to temper Adams' excitement about his big moment.

“You just dream and dream about what you want to do and how you want to achieve it,” the 6-foot-6, 220-pound, four-star forward from Westlake High said Wednesday during an interview with Austin television station Spectrum News 1 Texas, shortly after signing on the dotted line. “But then when you put all the work into it, it's draining. It drains your body. It drains your mind. So just taking a couple days off just to reflect (on) all the hard work that I've been doing, it's just amazing how far I've come.”

Although Wednesday's ceremony, which featured one of Adams' best friends, Coleton Benson, from a rival school signing with Army at the same time, was a celebration, it also marked the culmination of the journey Adams spoke about.

“All that was just a dream,” he said of the moments leading up to Wednesday. “And now that it's finally happening it's just crazy to even think about.”

Adams told Spectrum 1 on Wednesday night that KU's pitch as a family-oriented program, along with all of the positive things he had seen and heard about Bill Self's program throughout the years, made Kansas a no-brainer choice.

“With COVID and everything, you get limited to stuff, and you just go with the people that you ride with,” Adams told Dennis de la Pena of FOX 7 TV, explaining his decision to have a joint ceremony with Benson. “I knew him forever. He knew me forever. And it just sounded right.”

KU on Thursday morning announced that Adams' signing was official, with Self offering his first public comments about his newest player.

“KJ is a jack of all trades,” Self said in a news release. “I think KJ is a big guard that can play inside. He’s definitely strong enough. He’s a physically gifted youngster that can defend the five too. KJ is a guy that can play with the ball in his hands. He can play without the ball. He can be a tremendous physical presence in the game and certainly he is well beyond his years in that regard. I look forward to coaching his versatility.”

Later this week, the Jayhawks are expected to receive another letter of intent when four-star forward Zach Clemence makes his commitment official.

Most district foes don't celebrate #NationalSigningDay together.
That said, @AISDBowie's @BensonColeton (Army) and @ChapBasketball's @kj_atx (Kansas) are lifelong best buds - originally bonded by youth sports - so how could they not share the moment? @fox7austin 📹: @jsala123 pic.twitter.com/HIzK9tNkSE

None by Dennis de la Pena

Welcome to Jayhawk Nation, KJ! We can hardly wait to see you in action. Also, what a great way to do your signing, with one of your best buddies who you won't get to see as often after high school.