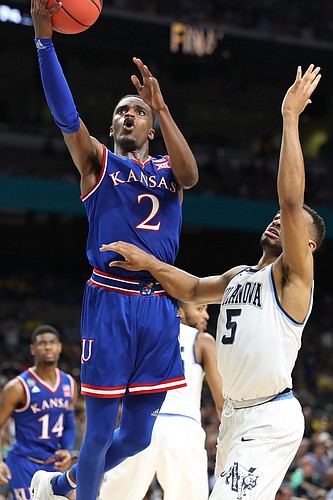 Kansas guard Lagerald Vick (2) elevates to the bucket past Villanova guard Phil Booth (5) during the second half, Saturday, March 31, 2018 at the Alamodome in San Antonio, Texas. by Nick Krug

It remains to be seen if it’s the game of the season. And given the hype and recent history between the two programs, it has to be in the running.

But we now know exactly when the Kansas-Villanova Final Four rematch will tip off and where it will be televised. And it sounds a lot more like a football kickoff time than a basketball tip.

The time and network became official Thursday, when the Big East released its full set of schedules. Let the countdown begin.

Along with KU’s meeting with Michigan State in the Champions Classic, another game at Rupp Arena against Kentucky in the Big 12/SEC Challenge and a pair of conference games against Big 12 foes Kansas State and West Virginia, the KU-Villanova clash figures to be one of the most anticipated games of the 2018-19 Kansas basketball season.

The official tip time brings the total number of 11 a.m. KU games during the upcoming 2018-19 season to four, with another slated to start at 1 p.m. and one more potential 1 p.m. tipoff that has not yet been finalized.

Those are some pretty early start times by Kansas basketball standards, which typically have the Jayhawks playing in prime time and in the 7 or 8 p.m. television slots.

That still will be the case for most of the season. KU currently has 15 games scheduled for 7 p.m. or later. And it’s possible that KU could have three more start times in that range when all is said and done.

Tip times for Big 12 games against Texas Tech and West Virginia in February are still pending and KU’s second game in Brooklyn, N.Y., at the NIT Season Tip-Off in November will start after 8 p.m. if KU wins its first game (Nov. 21 vs. Marquette) and 6 p.m. if the Jayhawks lose to Marquette.

Any word on the tip time for Stanford?