NBA Combine 2018: The measurements are in 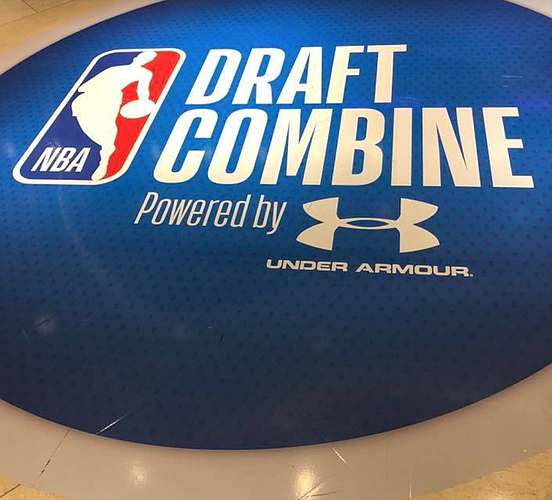 Just before Noon on Thursday, the NBA started releasing the various measurements of the 69 NBA Draft hopefuls participating at this week's combine in Chicago.

Most of the measurements — height, weight, hand size, body fat, etc. — were taken Wednesday but some had to finish up on Thursday morning before getting to the fun part of the combine this afternoon — on-court drills, athletic testing and, of course, 5-on-5 scrimmages.

While we wait for that stuff to get going, the numbers are worth looking at. First a chart to track the notable measurements of the five Jayhawks in attendance. And then a few quick thoughts about what you're looking at.

It's always interesting to look at these numbers and then compare them — heights and weights, at least — to the numbers these guys carried with them throughout their college careers on KU's official team rosters.

Without further ado, here's a quick look at the five Jayhawks in Chicago, by the numbers:

Now, a few quick thoughts on those numbers (as well as relevant comparisons for perspective) before hopping on to watch some of the workouts, which can be seen from 2-6 p.m. today on ESPN2 and the WatchESPN app.

• First off, Graham's 4.8% body fat is just insane. I mean, wow. There's a reason that guy was able to play 40 minutes — or at least 38+ — during most of KU's games last season and it has everything to do with his conditioning and the way he took care of his body. He did not carry any extra weight, which often is the reason behind injuries, and was a physical specimen out there running all over the floor. For perspective, I recently joined Genesis Health Clubs, will be 40 this summer and my body fat percentage is a shade over 22%, which my trainer said still puts me in the healthy range for my age, height and weight. And I'm a pretty active guy who still plays ball twice a week and works out 3 or 4 times a week. Graham's 4.8 percent, along with Azubuike's 7.95 number for that matter, just blows my mind.

• Let's stick with Graham for a quick minute. It's always a big moment for guards when they register taller than 6 feet and Graham got there, both in shoes and out of shoes. I know there's not a huge difference between 5-11 and 3/4 and 6-0 1/4 in terms of actual height, but there is when it comes to the sound of it. A lot of NBA execs are turned off immediately by guys who are listed under 6 feet tall. Big news for Graham that he got over that benchmark. As for the other heights, I thought it was interesting that Preston was nearly 6-11 in shoes and also think it's good news for Azubuike than he is a legit 7-footer in shoes. Newman topping the 6-3 mark was a little bit of a surprise but not much.

• Let's look at wing span real quick. If you've looked at him even just once in your life, it should come as no surprise to you that Azubuike's wing span was massive. When that guy walks up and down the floor, his arms hang down past his quads and his long arms have played a huge role in him getting good position and scoring with such ease inside. Azubuike's wing span was the second biggest as the entire combine, second only to Texas' Mo Bamba, who checked in at 7 feet, 10 inches. Graham's 6-6 wing span was pretty impressive for a guard who barely topped the 6-foot mark and, as I'm sure most of you have heard throughout the past couple of years, Svi checked in with the shortest wing span of all of KU's players at a shade under 6-5. Although that does not have a huge impact on his game, it is one of the things that hurts Svi a little in the eyes of the scouts.

• I know hand measurements are important, that whole being able to grip the ball and get into passing lanes and such thing, but I've never really paid much attention to them. So today I went out and measured mine just for comparison's sake. Again, I'm a 6-foot tall, pretty average 40-year-old dude when it comes to height, weight and things of that nature. So keep that in mind here. My hand width, fingers spread from outside of the thumb to outside of the pinky: Just under 8.5 inches. My hand length, top of my middle finger to where my wrist meets my palm: Right about 8 inches even. So take those measurements into account when you consider that all of these guys had hands of 9.5 inches wide or better and most were 8.5 inches long or better. It might not seem by much, but it makes a big difference when it comes to release and handling the ball. I can palm a ball, but have never been able to dunk. That's mostly because of the flat feet and lack of vertical jumping ability my parents blessed me with.

• As for body weights, most of those are right where we expected them. Graham and Newman are both built very solidly. Having all of that muscle and less body fat will do that for you. Azubuike's low-270 number shows he's been putting in some serious work in recent weeks. He was listed at 280 on KU's 2017-18 roster. And Preston, who also is really lean at 222 pounds, was listed near 240 when he arrived at KU. I've seen some stuff from his trainers and those watching his workouts who have said that he looked like the best athlete in the gym during the combine prep.

More to come later this afternoon after drills and such get going.

How is it that Udoka's shoes add 2.25" to his height but Newman's shoes only add 0.75"? Really makes me question the accuracy of these measurements.

2 and a quarter inch heels on basketball shoes are pretty insane.

If you've seen them up close you might not be all that surprised. Azubuike wears a much different shoe than Newman and the guards to handle his size.

It also could be because of things like posture and the minor difference in the people measuring, aka human error.

I did. I was correct.

A huge part of Devonte staying on the floor this year was a result of him giving up sodas. The calories are a negligible factor but eliminating the phosphorus that comes with it was absolutely critical. Not once in all those minutes was he the cramp magnet of the past. His body fat is almost on par with a competitive distance runner (2-4%).

dang it tait, now you have me wanting to join a gym. i had sub 5% in high school but now i also am that 40yr old dude.

Do it! I think the best I ever had was around 11 percent and I'd be thrilled now to get it back in the high teens... Father Time's a mother, eh?

Actually, having such a low level of fat can be detrimental even for elite athletes.