The good and the bad of Malik Newman's two-way contract 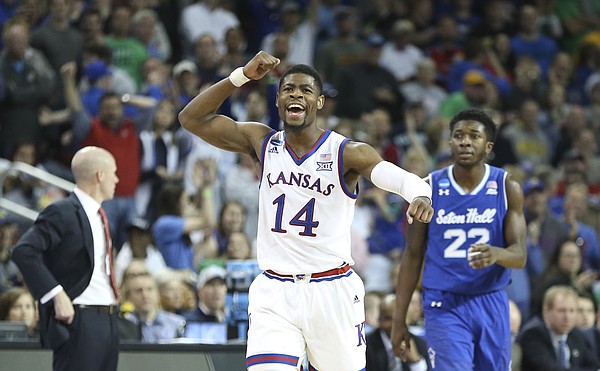 Kansas guard Malik Newman (14) pumps his fist as the Jayhawks lock up the win against Seton Hall with seconds remaining in the game, Saturday, March 17, 2018 in Wichita, Kan. by Nick Krug

It did not take former Kansas guard Malik Newman long to catch on with an NBA franchise after going undrafted during Thursday night’s 2018 NBA Draft.

Newman, who was a projected second-rounder by most mock drafts leading up to the draft, watched 60 other players hear their names called and then, just minutes after the draft had ended, agreed agreed to a two-way contract with the Los Angeles Lakers, as first reported by Yahoo Sports’ Shams Charania.

What that means is simple. Newman knows where he’ll play next season and he will get a shot at impressing the powers that be in the NBA.

What the two-way contract does for him is provide stability with the Lakers’ G League affiliate, the South Bay Lakers in El Segundo, Calif., and provides him the opportunity to be called up by the L.A. Lakers for a maximum of 45 days during the 2018-19 season.

While the two-way contracts provide a better opportunity for players in a financial sense, — they’ll make the pro-rated rookie minimum for every day they’re with Los Angeles, which could exceed $200,000 if they’re up for all 45 days — they also limit the opportunity to make the jump to just one team. In the past, players in the NBA’s Developmental League could be signed to an NBA contract by any franchise. Now, with the creation of the two-way contracts, which essentially serve as two extra roster spots for NBA teams, only the franchise that the player has a deal with can bring you up to the big leagues.

G League contracts can be worth as much as $75,000 these days, which, combined with the call-up possibility, gives these two-way players a clear path to making six figures right out of the gate.

While those facts are now Newman’s reality, the natural question exists whether he made the right move to leave Kansas early?

Even KU coach Bill Self asked it during a conference call with reporters following Thursday’s draft. But one breath after asking the question, Self also answered it.

“Did he make a bad decision to come out,” Self asked. “I don’t think so. He’ll do it the hard way like Wayne Selden did, but he’ll get there.”

Self said his experiences have shown him that the biggest negative for a player who goes undrafted often is the hit to his pride. Every player dreams of being drafted into the NBA and having a franchise tell the world that they want him.

But just because Newman did not get to hear his name called and is not being celebrated quite the same way that Svi Mykhailiuk is by the Lakers, who drafted him with the No. 47 overall pick on Thursday night, does not mean that Newman can’t find a way to make the roster and enjoy a lengthy NBA career.

He’ll have to put in the work to do it and it may be a little bit harder since the team has not invested as much money or commitment in him as they do the draftees. But all these guys seem to want is a chance and Newman is getting one — quickly, at that.

He may not have heard his name called but he did not have to wait long to find out where he was headed in the immediate future and that, coupled with the excitement of having a team tell you they want you, had to take away some of the sting of not getting drafted.

Newman is expected to begin his pro career with the Lakers' summer league squad next month in Las Vegas.

Great news for Malik. He worked hard last year, glad to see it pay off.

Can you afford to live in southern California on $75k per year?

A single guy can most definitely live in SoCal on $75k+. He may be renting and not pimping all sorts of glam, but he most definitely can live on that. Especially with the motivation of almost 3 times as much.

All he really needs is a gym membership/trainer and a motorhome.

Yes, you can. El Segundo is only a mile from the beach.

I predict that Malik will do just fine. I believe that he made the right decision to come out early. He's at an age where making a living is extremely important if it is to be in the sport of basketball.

Draftees are becoming younger and younger with all of the one and dones, and the trend is only going to continue.

aaaaarrrrgggghhhh.... I love that Malik and Svi are getting a shot but does it have to be with the Lakers? As a lifelong Celtics fan and coming of age during the Larry Legend/Magic era I hate the Lakers! This is worse than when the Raiders drafted Ben Heeney!

GM's that passed on Malik will be sorry

I'll be the first to say it, no he did not make the right move. He's a 6' 3" shooting guard. Those guys are a dime a dozen in the NBA. He was very inconsistent at KU. We saw Frank, Svi and Devonte all get drafted after their senior years. Malik would have been option 1 or 1A at KU next year, especially from the perimeter. A solid and consistent year would have raised his draft stock considerably. $75K is the max G league contract, it doesn't mean he is going to make the max. He would have made more by coming out next year.