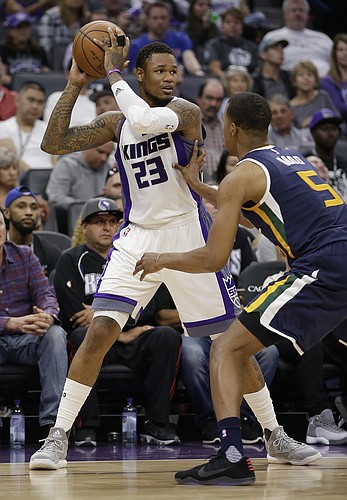 The Memphis Grizzlies are down a Jayhawk and Ben McLemore is headed back to the place where he began his NBA career.

That much became known early Tuesday, when ESPN.com's Adrian Wojnarowski reported a trade between the two franchises that sends McLemore back to Sacramento — along with forward Deyonta Davis, cash and a 2021 second-round draft pick — for guard Garrett Temple.

McLemore, who has struggled to get his NBA career off the ground since becoming a lottery pick in 2013, averaged just 9.1 points per game on 41.7 percent shooting in 24.5 minutes per game for his career during his four NBA seasons.

Last season — McLemore's first in Memphis, where he signed a free agent deal following the end of his rookie contract in Sacramento — the former KU guard averaged 7.5 points and shot 42 percent in less than 20 minutes per game over 56 games, 17 of them starts.

Each summer, when McLemore has returned to Lawrence for various charity events, he has wowed crowds with his athleticism and explosiveness while discussing that he just needs to find the right fit and get a real chance with a franchise to take his career to the next level.

In four seasons with Sacramento, who made him the No. 7 overall pick in the 2013 NBA Draft, McLemore played in 293 games and made 216 starts, but never played more than 32 minutes per game. That total came during the 2014-15 season — his second — when he averaged a career-best 12.1 points per game while starting all 82 contests for the Kings.

McLemore's return to Sacramento should not feel all that familiar. The Kings have turned over their roster almost completely since he was first drafted there and also have changed coaches and brought in an influx of young talent — including former KU point guard Frank Mason III and recent No. 2 overall pick Marvin Bagley Jr. — to help inject life into the struggling franchise.

McLemore, in addition to being an added scoring and shooting option on the wing, could be viewed as somewhat of a veteran presence on the young Kings roster.