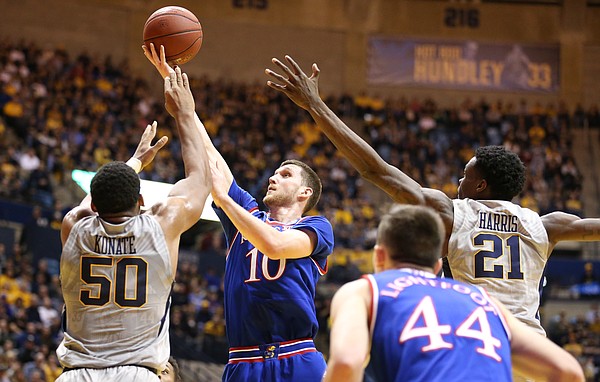 Let’s not confuse things here. The Jayhawks were good — real good — when they had to be down the stretch but not for the full 40 minutes. The Jayhawks’ first-half offense was sub-par at best and featured far too many unforced errors and bad shots. But, again, KU’s veterans came up big late, with Svi Mykhailiuk and Devonte’ Graham willing their team to victory to ensure they did not go winless in Morgantown during their Kansas careers.

KU’s defense was arguably as good as it has been all season, especially when factoring in the degree of difficultly in this one. Not only did the Jayhawks force the Mountaineers into 35.7-percent shooting in the second half, but they also turned the Mountaineers over, competed hard on the glass and came up with crucial stops at game point. Kansas forced several deep, contested jump shots by WVU and made the Mountaineers earn just about everything they go in the final 10 minutes of the game. KU coach Bill Self said after the game that the Jayhawks did the best job of playing to the scouting report that they had in a long time and it paid off big time.

Udoka Azubuike was the best player on the court.... when he was on the court. In just 20 minutes of game action, Azubuike proved to be a major factor on both ends and showed off his ever-evolving offensive game and increasingly aggressive mindset on the glass early on. The only thing keeping this from reaching the A range was Azubuike’s silly fouls. Nearly all of his five fouls were of the foolish variety and having him on the bench nearly cost Kansas. Luckily for the Jayhawks, Mitch Lightfoot and Silvio De Sousa combined to give some solid minutes in relief when Azubuike sat. The KU frontcourt is far from a finished product — and still could benefit a great deal from getting Billy Preston back — but efforts like Monday’s gave you a glimpse of what it could be when things are clicking.

It was a mixed bag for the KU backcourt from start to finish, with Graham and Malik Newman having rough nights to start and then came up big late and Mykhailiuk was pretty much in the same boat. Even the back-to-back turnovers by Mykhailiuk late in the second half were deemed acceptable because they came at the end of serious effort plays on his behalf. Lagerald Vick, who did not start because of a bit of a sluggish attitude during Sunday’s practice, hit KU’s first bucket of the night but then missed the next five 3-pointers he took and missed a block-out on a missed free throw in the final minute that could have been devastating. All in all, the fact that they found a way to win in Morgantown and did so by mixing enough offense with tough D gives the KU backcourt the B grade.

Mitch Lightfoot and Silvio De Sousa combined for eight points and eight rebounds in 18 minutes, numbers that Self said he would have sold out for before the game from KU’s second big man spot. Add in there the 36 minutes veteran minutes Vick played, even if they weren’t all good, and you’re looking at an above-average outing for KU’s thin bench.

I wouldn't describe the technical foul on Azubuike as silly! It was the most consequential call of the game because it led to limiting his time on the court and giving Konate free range at the rim. After Konate was screaming after each block, it seems disingenuous to slap Dok with a T for staring him down. This was a homer team of refs. Which makes the win even more impressive.

Udoka was not intimidated at all and showed more fire than I can remember. Konate's bush league antics backfired and may lead to giving Udoka confidence in moving past him in the conference bigs ratings.

Speaking of report cards, K-State did a favor for KU and beat Oklahoma in Manhattan last night.

I would say that was an "A" for the Wildcats.