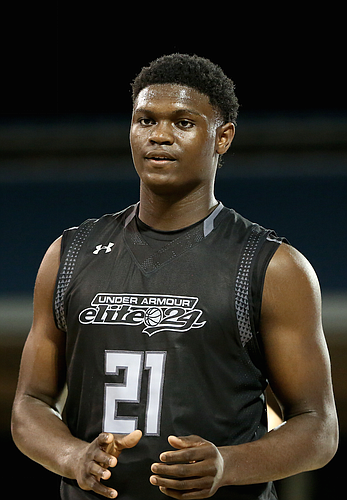 While the immediate reaction to and impact from Kansas basketball’s ability to land Class of 2018 big man David McCormack took the minds of most people to the KU front court and just how loaded the forward/center position will/could be during the 2018-19 season, there was an overlooked aspect of McCormack’s Sunday evening announcement that might wind up being just as big for the Jayhawks.

With only McCormack and small forward Zion Williamson down as official visitors for Saturday’s annual Late Night in the Phog extravaganza, the Jayhawks already were in a position to spend a good chunk of their time and attention on Williamson, the No. 1 ranked player in the 2018 class according to the 247Sports rankings.

But now, with McCormack already committed, the Jayhawks — and McCormack, for that matter — can spend the overwhelming majority of their time giving their undivided attention to Williamson. And that can only help the five-star small forward’s feelings toward KU.

Kansas currently leads all schools in the 247Sports Crystal Ball predictions at 43 percent for the 6-foot-7, 230-pound athlete from Spartanburg, S.C. Fellow blue bloods Kentucky (29), Duke (14) and North Carolina (7) round out the site’s top four predictions and Williamson plans to visit at least three of the four by the time the recruiting process is over.

He was scheduled to visit Kentucky last weekend but had to postpone because of a family matter, according to Rivals.com’s Eric Bossi.

While that might seem like good news for Kansas on the surface, a possible reschedule date falls in line with UK’s version of Late Night, which obviously would compete favorably with what KU can offer Williamson this weekend.

The elite prospect, who also has visited South Carolina and Clemson unofficially, has a visit to Duke scheduled for Oct. 22 and UCLA for Oct. 27. It’s not yet known if he’ll take his fifth and final official visit.

The goal for Kansas, of course, will be to not let Williamson get to that point by wowing him so much during his visit to Lawrence this weekend. Late Night, and the overwhelming love from the fans, the insane production and hype that goes along with all of it, have been known to make quite an impression on recruits in the past. 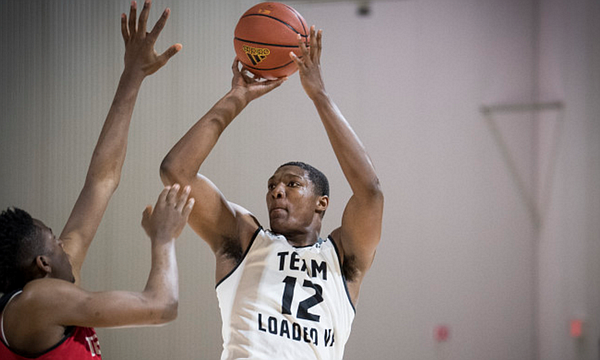 New Kansas commitment David McCormack, the No. 2 ranked center in the Class of 2018, announced his college choice on live television Sunday, Sept. 24, 2017. by Photo courtesy of adidas

And the presence of McCormack, who, no doubt, will be riding high after his commitment to Kansas, certainly won’t hurt KU’s pursuit of Williamson.

In fact, McCormack, in the not-too-distant past, has talked about playing with Williamson in college.

Asked with whom he would like to play with most in the 2018 class during a quick August video interview by Max Holm of itsovertime.com, McCormack said simply, “Probably going to have to say my boy Zion. Zion’s definitely one.”

Wrote Holm of the idea of the two physical athletes' playing on the same team next year: “Just think about Zion and David for a second. The size and pure power of them would be untouchable. That’s a pairing that would dominate almost anyone. Only question is, is Zion down?”

That very question figures to come up often this weekend, as both McCormack and the KU coaching staff figure to bring up the topic a time or two throughout Williamson’s visit, be it in sincere fashion or more of a lighthearted, joking manner.

Either way, their ability to tag-team Williamson during his official visit during one of the biggest basketball weekends of the year can only help KU’s chances of adding the skilled playmaker to a 2018 recruiting class that’s already off to a terrific start.

Holy smokes, if we get three early commits from the #2 rated center in the nation (McCormack), a 5 star power forward (De Sousa), and the top overall and small forward player in the nation (Williamson), I just might know what it feels like to be a UK basketball fan during the recruiting season (without the stink).

just imagine how deep and talented the front court for the 2018-2019 team would be if Azibuike or Preston stayed another year..Azibuike/Preston with McCormack, Lawson, Desousa, now THAT, would be a formidable front court to go up against...and to think, KU is also picked to land Grimes..even Dotson could still pick KU

I would hope Preston won't leave after a year, but then again I was surprised that Diallo left without making making much of an impact on the court (and to his credit has worked his way onto a NBA team). Azibuike leaving after this season is expected, if he has the season needed to make KU a national contender. This team could be fun if the injury bug stays away and Azibuike stays out of foul trouble.

If Grimes and Dotson commit too... (picture Homer Simpson drooling)

What guards wouldn't want to play around that front court? They would be double-double kings.

Where is the "fire Jay Howard" guy?