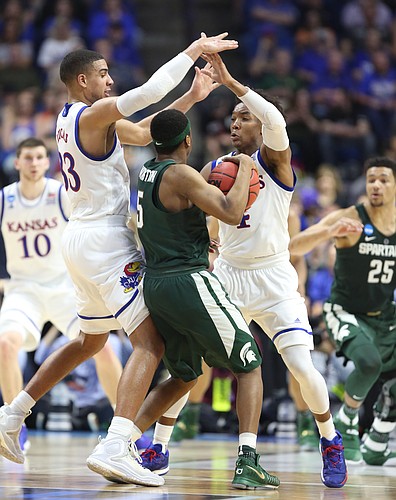 Scoring 100 points in the first round was one thing, but following that up with 90 in Round 2, against Tom Izzo and Michigan State, no less? That’s downright impressive. KU coach Bill Self agreed, even if he wished it had come from better execution. “I thought we made hard shots. I don’t know that it was great offensive execution, I thought it was great individual play.”

KU’s biggest runs featured the Jayhawks getting defensive stops and hitting the glass. Kansas out-rebounded Michigan State 36-28, not the most impressive number, but more than enough to control the game. The Spartans shot a decent percentage (44) but had to earn absolutely everything and occasionally got swallowed up and watched the Jayhawks sprint the other way for easy transition buckets. Speaking of fast-breaks, KU’s transition D also was solid most of the night. Oh, yeah, and then there were those two blocks by Josh Jackson. Wow.

Reserve Dwight Coleby got the glory and absolutely deserved it for coming up huge in a big spot, but Landen Lucas was terrific. Absolutely, positively, sensationally terrific. He was strong when he posted up, scored with ease, grabbed nine rebounds in the first half alone and played the kind of defense that must’ve made Michigan State think there were two or three No. 33’s on the floor for Kansas. He walled up and played tall inside, showed strong help on ball screens and even trapped a time or two. Just a terrific performance to build even more confidence and head into next week’s showdown with Purdue Caleb Swanigan. Bragg’s rough night accounts for the minus.

Mason didn’t have a great night shooting the ball, but who cares. He finished with 20 points and 5 assists — right on his season averages — and set up his teammates in good position to make plays all night. Beyond that, Josh Jackson (23) and Devonte’ Graham (18) put up big time point totals and buried the Spartans inside and out. Svi Mykhailiuk (9) came within one point of making it two games in a row that the starting five all reached double figures in scoring and also played some of his best defense of the season early in the game.

As mentioned above, Carlton Bragg had another rough night. Nick Ward was just too big, strong and powerful for Bragg to hold up. But Dwight Coleby and Lageral Vick both played very well for Kansas and contributed some positive minutes and memorable plays. With the good showings out-numbering the bad, 2-1, and one of them coming as at least a little bit of a surprise, this grade gets bumped all the way up to the high-B range.

Absolutely spot on across the board. Well said.

Amen! Couldn't have done it any better. This team rocks!

Great assessment but you were not critical enough of Bragg. He sucks the life out of the entire team when he is in. You can see it and feel it. The team has no confidence in him and he sucks all the energy and momentum from us. Colby has proven he is the go to guy for minutes for Lucas. He has positive energy and unlike Bragg he isn't afraid of his shadow. I would play Mitch before I would play Bragg. He is and was horrible and has to go. He may be the worst player to ever put a uniform on that gets minutes. Bye Bye Bragg, thanks for the memories, time to move on! Lucas is NBA ready he may be the best big man and team player I have seen on this team in a long time. Was at the game yesterday and they were flat out awesome!

I think you are spot on......for whatever reasons Carlton comes and goes and is never consistent one way or the other. yet Coach keeps giving him the chance. Maybe now Colby will get his due and Bragg can sit and learn!

I think self is in a similar situation to last year's fifth starter when it comes to bragg. if you recall he didn't know who to start as his 5th and he turned to the team who told him almost unanimously it should be lucas.

this year it is the first guy off the bench, bragg leaps out from a talent level and probably a practice level but when they boy gets in games he's just not confident at all. I think Self has realized that Coleby is getting better results.

Steve you are right about Coleby and Lucas. Every other game Bragg does show up decent but I can see Dwight getting better numbers with that playing time. What we will miss about Landen is how he walls off not only on rebounding but for Frank and Josh to get to the rim. I've seen him ride players like Motley and Lual-Acuil clear out of the lane. That is savvy and invaluable.

And that's the stuff that doesn't show up in the stats, yet makes a huge difference in the game. Very observant to point that out. I'm sure coach sees those things, but the average fan probably not as much.

I kept saying Bragg would find himself, well I hope I'm wrong, I hope he hasn't found himself yet. Maybe it's just playing out of position that's killing him. I don't know if coach will go back to two big guys next year with Dok back and a healthy Coleby and more seasoned and physical (hopefully) Lightfoot, but if he does, maybe Bragg will find himself at the 4.

Hey Matt what's up with the postgame audio as usual? Are you not allowed to post for the tournament anymore? Been listening to it every game for 21 years and the last 2 games are not there leaving me something to crave. Thank you in advance!

my thoughts exactly... where are the post game pressers?

Steve Johnson should be ashamed for dissing a kid like he has here with Bragg. Bragg spent his entire time learning to play the four position facing the basket. He had planned up until the injury to Udoka to be playing that position this year. He has an excellent jumper from 17' in. Yet he has been trying hard to take Udoka's place playing the 5 with his back to the basket. He has averaged better numbers than a soph at Ariz. named Comanche that all the KU fans were dying to get to KU. Point being, the kid has tried hard to do what the team needs him to do even though it is outside his wheelhouse. Now is not the time to pile on and try our best to discourage a good kid and show no appreciation for his sacrifice this year. Name one other kid on this team who has made as great a sacrifice for the team.

what sacrifice? OH, he did get his bong confiscated so you are right there. When you cant perform in a game means your jumper aint that great. I have watched every game this year and have a decent understanding of the game and team. This is not a personal attack on character, i am giving my opinion only as a Kansas basketball team member. He may do better somewhere else, not everyone is able to adjust to kansas basketball. What about the position 4 or 5 causes you to continuously miss easy layups, bobble passes, not rebound, turn the ball over or shoot air balls. Once again, the kid could be the greatest young man in the world and I hope he is. I am only talking Kansas basketball and contributing to the team.

Thanks Mr. Stauffer. A good reminder for every Jayhawk fan, including myself. Positive feedbacks and encouragement sound better than bashing our own players. Assessment of players, who's better in doing what on the court, reflect our knowledge of this team, not necessarily becoming resentment of any players. Once a Jayhawk, always a Jayhawk.