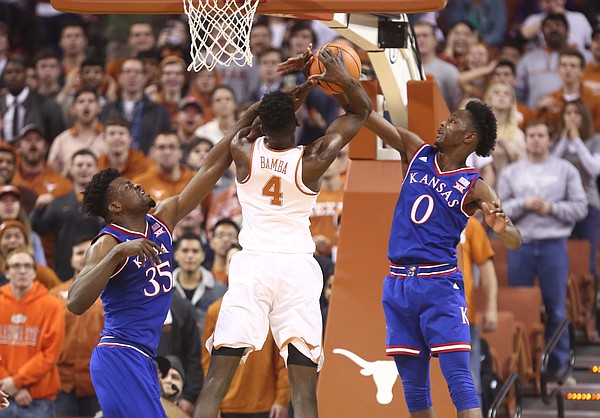 There's just no other grade to consider here. And it's deserving for far more than KU's 17-of-35 showing from 3-point range. The Jayhawks were efficient inside and out, took care of the ball to the tune of just eight turnovers and even got to the free throw line 15 times, knocking down 13 of them.

The Longhorns — particularly Mo Bamba — got a lot right at the rim and also put up 86 points while turning it over just nine times. KU's 2-3 zone wrinkle was a nice touch and the Jayhawks got a couple of big rebounds when they needed them. Other than that, though, this one was won by the Kansas offense and the defense remains a work in progress, although winning on the road in a conference game can do wonders for a defense's confidence.

Udoka Azubuike delivered his fourth straight solid game — and yet another double-double (13 points, 13 rebounds) — and played through some serious back pain to do it. The only area in which he struggled was early on when he was still trying to figure out how to solve Mo Bamba's defense, which he ultimately did. After getting his shot blocked twice early, Azubuike started going into Bamba's body and through him to the rim. That led to easier buckets and a couple of fouls.

KU's lead dogs combined to shoot 16 of 30 from 3-point range and KU coach Bill Self said Devonte' Graham controlled the pace and flow of the game the way a senior point guard is supposed to. He also said junior Lagerald Vick may have been the best player in the game and celebrated Svi Mykhailiuk's hot shooting touch. He even praised surprise starter Marcus Garrett for solid minutes and sophomore Malik Newman for responding well to a spot on the bench. In short, there was not much to not like about the Jayhawks' backcourt in this one.

With Sam Cunliffe getting the DNP, coach's decision tag in this one and Silvio De Sousa in the building but not in uniform, the Jayhawks still used just seven players. But the 39 combined minutes from Malik Newman and Mitch Lightfoot were more than enough to help give KU a lift off the bench.

Great game, gentlemen! I hope each of the road games goes as well.

1 down, at least 3 more to go - assuming we defend the house and Coach is right about winning the conference outright with 5 losses.

Agree. Lets hope some of the rest beat up on each other. Thought OSU would have helped us vs Team Huggie.

We've got to get some help in the post. Azubuike is too much of a workhorse right now. It might be that the heavy load is the cause of the back problems. One thing is sure: his heavy slate of minutes isn't doing anything to HELP the problem. We need De Sousa and Preston NOW!