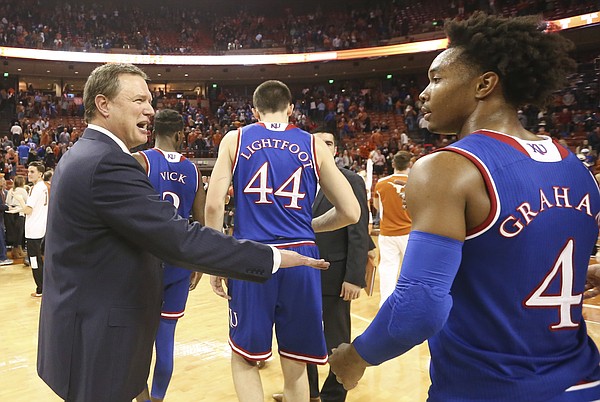 1 - Devonte’ Graham: Did a terrific job of leading the team and putting the ball in hot hands for shots, including his own hands. Made 6 of 12 3-point shots and totaled 23 points, five rebounds, eight assists, and committed one turnover in 39 minutes.

3 - Svi Mykhailiuk: Scored 15 of his 20 points in the second half on five 3-pointers, including one on which he was nearly out of bounds. Made guarded shots with that beautiful rotation of his.

4 - Udoka Azubuike: Played with a sore back and although he didn’t block any shots, did a nice job on the boards at both ends and finished with 13 points and 13 rebounds. Had three of his shots, including two hooks, blocked by Mohamed Bamba. Did a better job of going right at him in the second half.

5 - Malik Newman: Had a solid defensive game and totaled 13 points and five rebounds off the bench.

6 - Marcus Garrett: Started in place of Newman and made some important defensive plays. Played 18 minutes and totaled two points, three rebounds, two assists, two steals and a blocked shot. His bucket was an impressive one, an up-and-under reverse layin that denied Mohamed Bamba another blocked shot.

7 - Mitch Lightfoot: Scoreless with one rebound, one blocked shot and one steal in 10 minutes.

Loved when Devonte got iso'd on Bamba, put him in his back pocket then tricked him into the foul. Wished he had done that earlier in the game, and more often in general as well. He's smart enough to be able to generate some more foul trouble and FT's that way in general.

I thought Svi played better D as well. He gets plenty of crap around here for it, but it seems that his maturity and aggressiveness is paying off on both ends of the floor lately.

Garrett's 2 points came on a nice reversal with Bamba in pursuit. Very Sweet.

While it probably isn't good for the pride, it would seem to me that we are better with Malik coming off the bench. Garrett has a nice all round game. Even with Mailk's struggles, he still has more O than the freshman at this point, but we really don't need it with the other 4 in the game. That's not the case when we start subbing in the other players. He fills in so much better for any of the other 3 wings. Maybe it will help him find his game again.

Seemed Malik was a stumbling block. He never learned that he couldn't attack Bomba and get any favorable result. It may turn even more bitter if the other team is a better shooter.