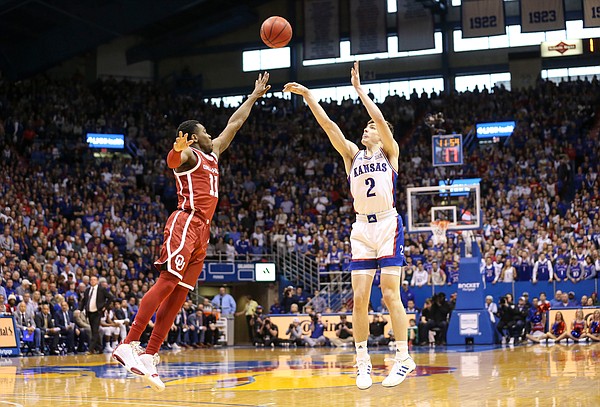 Kansas guard Christian Braun (2) hoists a three before Oklahoma guard De'Vion Harmon (11) during the first half on Saturday, Feb. 15, 2020 at Allen Fieldhouse. by Nick Krug

Only time will tell for certain which member of the 2020-21 Kansas basketball team will become the Jayhawks’ go-to 3-point shooter. But we don’t need to see one minute of Late Night or actual games to know who it should be.

One could argue pretty easily that Christian Braun even took on that role for at least a game or two during his freshman season, when it belonged to an upperclassman most of the time. Now it’s hard to envision anyone on the roster but Braun leading KU in 3-pointers.

Isaiah Moss made (49) and attempted (141) the most 3-pointers for KU this past season, while playing in 30 games as a graduate transfer. Now that Moss’ college career is done, there’s an obvious opportunity for Braun to not only fill those adidas, but burst them at the seams.

“I feel like I’ll be able to take a lot of those shots,” the 6-foot-6 sophomore said Thursday afternoon, when the loss of Moss came up during a video call with reporters.

The Jayhawks, despite all their success in the pandemic shortened 2019-20 season, weren’t a great 3-point shooting team, averaging 6.4 makes from long range on 18.6 attempts (34.4%, which ranked 117th nationally).

It took a little while for Braun as a freshman to earn the consistent playing time that would allow him to showcase his marksmanship. Once he did, Braun drained three or more 3-pointers in seven different games. Braun only averaged 18.4 minutes as a freshman, but appears in line for a much larger role as a sophomore. If he’s not starting, he’ll play heavy minutes off the bench.

And if Braun can hit around 44% of his 3-pointers again in the coming season, he should be shooting way more often than Moss did anyway. Forget the 4.7 attempts Moss took a year ago. Look back to the 2017-18 season, when Svi Mykhailiuk got up 6.6 3-pointers an outing and averaged 2.9 makes (44.4%).

It seems unlikely this KU team will have three different players hoisting more than five times a game from beyond the arc, the way Mykhailiuk, Devonte’ Graham (6.9) and Malik Newman (5.3) did for the 2018 Final Four squad, as all three of them shot at least 40% from downtown.

Braun had a long list of teammates, though, when asked to identify KU’s current best shooters. And he didn’t even include himself.

According to Braun, junior Ochai Agbaji (34.8% 3-point success last season) is shooting the ball “really well” during preseason practices, as is redshirt freshman forward Jalen Wilson. Braun called sophomore wing Tristan Enaruna (8-for-31 as a freshman) an improved shooter. Plus, Braun said junior college transfer Tyon Grant-Foster “can jump up and hit a shot” and implied everyone knows about freshman guard Bryce Thompson’s prowess from outside.

Just how much other Jayhawks can stretch defenses and open up the lane for drives and junior big David McCormack remains to be seen. But KU has a sharpshooter in Braun, and his light should be the brightest shade of green at all times to maximize his offensive potential.

Self on DeSousa’s departure, Late Night and more by KUsports.com

Ochai Agbaji worked on ‘everything’ during offseason by KUsports.com

It would seem a big reason this team is unlikely to have 3 players taking as many 3’s as Devonte’s FF team is because it would seem that this team will have a greater variety of players on the court. Didn’t we have a bunch seats on the bench occupied by players that couldn’t play so that we only had 1 or 2 subs? It would seem that this team has more versatility though it remains to be seen how many of them earn the confidence to be on the floor. Could this be the year we have wave replacement? 5 for 5 and run the snot out of the other side?