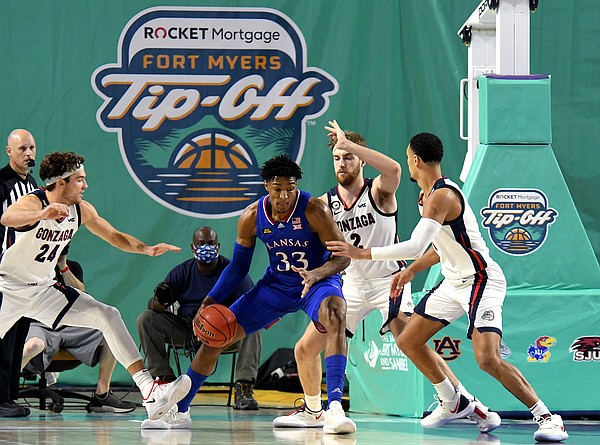 Kansas junior David McCormack battled for post position during a game against Gonzaga in the season opener on Thursday. The Bulldogs earned a 102-90 win over the Jayhawks in the third annual Rocket Mortgage Fort Myers Tip-Off on Thanksgiving Day at the Suncoast Credit Union Arena in Fort Myers on Nov. 26, 2020. Photo by Chris Tilley by Photo by Chris Tilley

For a team that scored at least 90 points and shot 50% or better from the floor in each of its first two games of the season, Kansas, surprisingly enough, actually could have left the Fort Myers Tip-Off with even better numbers in both categories.

Ahead of No. 7 KU’s Tuesday night meeting with No. 20 Kentucky in Indianapolis, Kansas coach Bill Self said every team is going to miss some bunnies here and there, but admitted some of KU’s misfires were unforeseen.

“Gonzaga, wow, we missed three or four that you would think would be, I mean, not automatics, but it’s a two-foot putt or three-foot putt,” Self said. “And I’ve missed plenty of those, trust me.”

Perhaps some season debut nerves got the better of the Jayhawks early versus the Zags, as David McCormack, Marcus Garrett, Ochai Agbaji and Christian Braun each missed an attempt near the rim in the first five minutes. Overall, KU finished 13-for-23 (57%) on its high-percentage looks within a couple of feet of the basket.

Even Jalen Wilson, who has emerged early as a promising small-ball big, missed a couple within a minute span of the second half — though on the second misfire Wilson secured his own rebound and scored.

Against St. Joe’s, KU ultimately rolled with a five-guard surge in the second half. Yet on the day the Jayhawks converted on only 14 of their 26 layups (and went 3-for-3 on dunks).

Again, right off the bat, KU didn’t finish around the rim. Junior forward McCormack, who struggled in both games and is dealing with some leg pain went 0-for-3 inside in the first three-plus minutes alone. Two of those came on one sequence, as McCormack rushed a layup off an entry pass and then too quickly tried to tip in his miss.

Garrett, KU’s trusted veteran guard, even missed his first three layup attempts versus St. Joe’s. On one Garrett was blocked when he didn’t get enough lift off a spin inside. On another, he drove all the way to the rim but short-armed the finish.

Self said Monday morning missing more high-percentage looks inside than normal has at least something to do with KU no longer having an elite finisher such as Udoka Azubuike, who was “always playing above the rim” in recent years.

Even so, many of the 22 shots at (or below) the rim KU missed in two days last week were surprising considering the circumstances.

“We ran some stuff better than what the appearance was,” Self said, “because, gosh dang, it seems like we had it at two feet quite a bit and came away with nothing.”

Of course, with Kentucky up next on the schedule, finishing inside will be of the utmost importance for KU in its next high profile showdown. Between 7-foot senior center Olivier Sarr and 6-10 freshman forward Isaiah Jackson, the Wildcats (1-1) are far more athletic and intimidating inside defensively than St. Joe’s.

“With their length,” Self said, “and we don’t really play above the rim with our bigs as much, that length obviously brings in blocking and altering more into play (for KU players trying to finish inside).”

Here’s a look from hoop-math.com at the Jayhawks’ individual success rates around the rim through two games:

McCormack is capable of much better, in particular. Last year, as a sophomore, he converted 70.2% of his shots around the rim, going 40-for-57.

Even if the Jayhawks end up playing more five guard lineups, they need McCormack to make the most of the minutes he gets and score inside with consistency. Self has maintained, after all, that McCormack looked much better leading up to the season. The 6-10 junior just has to get away from the sped-up in-game sequences that popped up for him often earlier in his career.

In spite of the missed opportunities I'll take 90 points any day. More concerned about how porous our defense was. Gonzaga had so many easy layups in the first half.

In goes well beyond the last couple of games...KU historically misses more than it's share of lay-ups and bunnies.